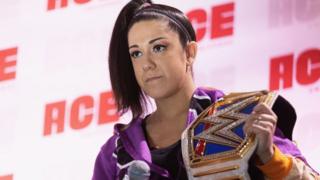 New WWE fights were broadcast on Monday night, without a ringside audience.

The wrestling company had been airing pre-recorded programmes for several weeks, but Florida’s Republican governor said live production could continue as an essential function.

Sports events been cancelled globally due to Covid-19.

The pro-wrestling company welcomed the decision signed by Governor Ron DeSantis exempting “professional sports and media production with a national audience” from a state-wide stay-at-home order.

The company said: “We believe it is now more important than ever to provide people with a diversion from these hard times”.

WWE had previously come under scrutiny for continuing with recording events despite coronavirus, with some stars choosing not to participate over health concerns.

The company said it was taking precautions to “ensure the health and wellness of our performers and staff.”

The US is the global epicentre of the coronavirus pandemic with 554,684 confirmed cases and 23,608 deaths. In Florida, over 20,000 cases and more than 460 deaths have been reported.

The state is under an executive order which limits movement outside of homes in a bid to curb the spread of coronavirus.

Professional basketball, baseball and American football have all been suspended in the US, and international tennis, football and Olympics events are delayed or cancelled.

Five of WWE’s six weekly shows – Raw, Smackdown Live, NXT, 205 Live and Main Event – have been broadcast without interruption from WWE’s training facility in Florida since the lockdown began.

The only exception is NXT UK, which is pre-taped in front of audiences across the United Kingdom. As no similar exemption has been made across the Atlantic, the show this week aired a retrospective looking at the history of the brand.