The people involved in a naked photoshoot on a high-rise balcony in Dubai will be deported, say authorities, after footage of it was widely shared online.

At least 11 Ukrainian women and a Russian man, thought to be a photographer, were arrested on charges of public debauchery and spreading pornography following the incident.

Pictures and videos showing more than a dozen naked women lined up on the balcony while being filmed in the upmarket Marina neighbourhood in broad daylight circulated on social media on Saturday.

There are reports it appeared to have been a “publicity stunt”. 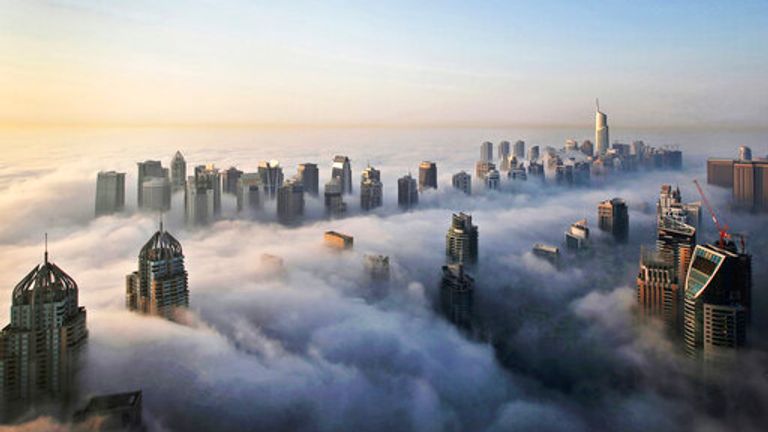 The scandal came as a shock in the United Arab Emirates (UAE), where even the likes of kissing in public has landed people in jail.

Dubai’s attorney general, Issam Issa al Humaidan, said public prosecutors have completed an investigation and those in the photoshoot will be sent back to their countries.

Eleven of the detained women were Ukrainian, the nation’s foreign ministry confirmed, while a Russian diplomat in Dubai said the photographer who filmed and took pictures of the naked women had Russian citizenship.

There were other women involved in the video who were also arrested, but their nationalities were not immediately known.

The move to deport the foreigners is very unusual for the legal system in Dubai, where such cases often go to trial.

And it comes just days before Ramadan, the holiest month of the Muslim calendar, and as Ukrainian President Volodymyr Zelensky lands in nearby Doha, Qatar, for a state visit.

Dubai is a popular destination for foreign social media influencers, particularly during COVID, where it promoted itself as a major pandemic-friendly party haven for travellers fleeing tough lockdowns elsewhere.

Although the UAE has recently made legal changes to attract foreign tourists by allowing unmarried couples to share hotel rooms and residents to drink alcohol without a licence, the justice system still has strict penalties for violations of the public decency law.

Nudity and other lewd behaviour carry penalties of up to six months in prison and a fine of 5,000 dirhams (£984).

While liberal in many areas compared to its Middle Eastern neighbours, the UAE also has tough laws governing expression – with people sent to jail for posting comments and videos online.

The country’s majority state-owned telecom companies block access to major pornographic websites – and the sharing of pornographic material is punishable with prison and big fines.

Clear Creek in Golden closes for Fourth of July weekend 2020