There’s a lot of gloom surrounding the post-Brexit trade talks between the UK and the EU at the moment, but they were never going to be easy.

The UK left the EU on 31 January and entered a transition period until the end of the year, with all the rules, regulations and budget payments staying the same.

On 1 January 2021 things are going to change though, and time is running short to agree a new trade deal before then.

The talks have been overshadowed by the coronavirus crisis, especially at the beginning when they had to take place via video link. But that’s not the only reason that big disagreements remain after seven rounds of negotiations.

It’s mainly a matter of substance.

If a free trade deal does emerge, it won’t be a particularly ambitious one. There hasn’t been time to go for much more than a basic model.

But even with these limited aims, negotiators have hit a brick wall on some fundamental issues.

First of all, there is what is known as the level playing field. That means measures to ensure businesses on one side don’t have an unfair advantage over their competitors on the other.

All trade agreements have such measures, but the EU wants the UK to stick particularly closely to EU rules on things like workers’ rights, environmental regulations and particularly state aid (financial assistance given by government to businesses).

The UK, on the other hand, says the whole point of Brexit was to break free from following common rules.

Then there is fishing: the UK would like full access to the EU market to sell its fish there, but in return the EU wants full access for its boats to fish in UK waters. British negotiators say that’s not possible because the UK is now an independent coastal state.

Fishing makes up only a tiny part of the economy on both sides, but it was a big part of the Leave campaign that won the Brexit referendum in the UK in 2016. 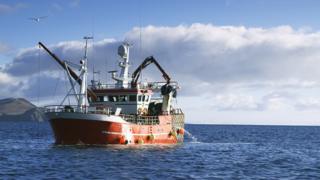 A third area of disagreement is what is described as the governance of any future agreement. That is partly about the overall structure of any deal, but it is also about how any new agreements would be enforced and about the role of the European Court of Justice.

Another issue which will remain extremely sensitive is the way the UK proposes to implement the agreement it made with the EU before Brexit, on keeping the land border in Ireland (which is now the border between the UK and the EU) as open as it is at the moment.

The EU has been concerned that the UK may not live up to all of the commitments it has made here; the UK strongly disagrees.

So there are plenty of issues to resolve and it normally takes years to do a trade deal. But this process only has a matter of months left.

If no trade agreement is completed by the end of the year, the UK won’t have any formal deal with the EU – which accounted for 43% of UK exports in 2019 (and 51% of UK imports).

It’s also worth remembering that the negotiations are not just about trade.

There are important talks, for example, about police and security co-operation as well. The UK wants to maintain the same access to shared databases that it has now, but the EU says that isn’t on offer to non-members.

But if the trade talks fall apart, don’t expect much meaningful agreement on anything else.

So will a basic deal eventually be done?

If politicians on both sides are willing to make concessions, then yes, it probably will. But there are no guarantees.

An EU summit in mid-October has always been seen as an unofficial deadline for completing a deal, which would still need to be turned into a legal text, translated into all EU languages, and ratified by parliaments on both sides.

But there’s already chatter that mid-October may be too soon, raising the prospect of another summit and talks stretching into November.

Even with a deal, the UK’s relationship with the EU will be very different after it leaves the EU single market and the customs union at the end of the year.

And if the talks fail, businesses on both sides of the Channel could have only a few weeks to prepare for an abrupt change in the way they trade, at a time when many are already struggling to stay afloat.

The economic challenges caused by Covid-19 could strengthen the case for compromise; or it is possible that those who favour a more radical break with the EU will decide to push on regardless.

What claims do you want BBC Reality Check to investigate? Get in touch