For these second-generation business owners, the familiar format offers a gateway
to a wider audience.

At ChòpnBlọk in Houston, customers line up for dishes like the Golden bowl, which includes jollof rice with a Creole twist, plantains, roasted cauliflower and brussels sprouts served with a vegan curry.Credit…Michael Starghill Jr. for The New York Times

HOUSTON — At POST Houston, a popular food hall, the lines stretch long for ChòpnBlọk, where the Nigerian American owner Ope Amosu offers a familiar customizable template — rice, vegetables, protein — that are deeply influenced by his West African pride, and his London-born, Houston-raised identity.

Take the Golden, a nod to the Gold Coast of West Africa — and to Mr. Amosu’s stint as a prep cook at Chipotle while still working as a corporate sales executive. The hearty meal includes smoky jollof rice with a Creole twist, plantains, roasted cauliflower and brussels sprouts, and comes with a vegan honey bean coconut curry that’s at once sweet and alluringly tangy. To top it all, customers can choose from various proteins marinated in Cameroon pepper.

The traditional West African restaurants that dot southwest Houston are cozy, dimly lit spaces and often family-owned. But at restaurants like ChòpnBlọk, which regularly appears on the city’s dining lists and is lauded on social media by celebrities like the “Insecure” star Yvonne Orji and the rappers Jidenna and Wale, the West African flavors and staples are quicker, more casual and — their owners argue — more accessible to non-African diners.

“We’re not trying to convince people our food is good or worthy — we already know that it is,” Mr. Amosu said. “I am, however, trying to tell our story and welcome people in who may be nervous about going to a place that feels a bit unfamiliar.”

In food halls, strip malls and shopping centers across the United States, fast-casual West African restaurants are proliferating, and the second-generation owners behind them are at once showcasing the range of these cuisines and debunking reductive myths about them.

“I hope that it helps dispel the lies that make you think of Africa as a continent of scarcity,” Mr. Thiam said. “There’s so much abundance, and there’s so much creativity that’s coming from the continent, and we get to show them that story through our food.” 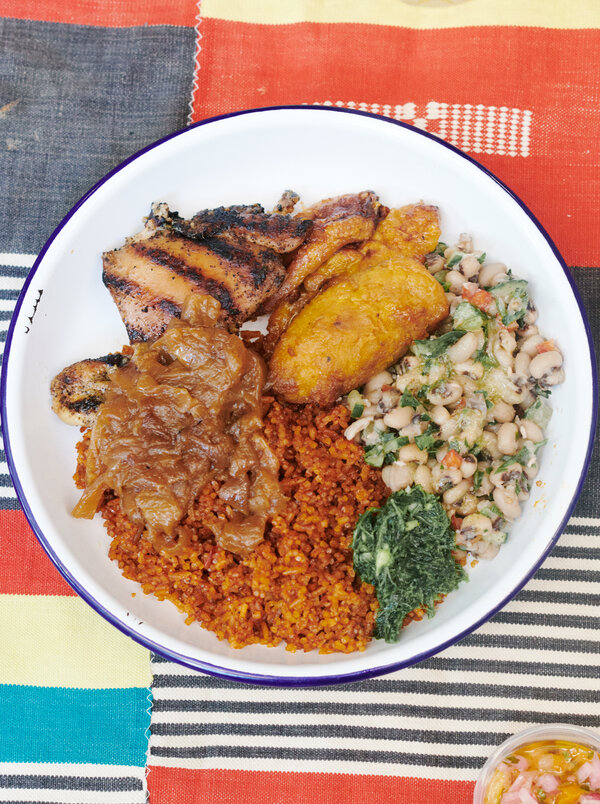 The fast-casual model allows West African chefs to preserve the region’s classic flavors as well as incorporate elements of their American upbringings in a format that is recognizable to diners less familiar with the cuisine.

Like Mr. Amosu, Mr. Shokunbi attended the school of Chipotle — one of the nation’s best examples of fast-casual success. During college, he began working at a Chipotle franchise on the side as he explored opening his own business.

His Spice Kitchen adopts some central components of the fast-casual model: biodegradable serving bowls, customizable meals and a varied interpretation of storied cuisines. Since it opened last fall, the restaurant has offered salmon and shrimp alongside suya — Nigerian seasoned, skewered and grilled meats — and sides like spinach efo riro, jollof rice and grilled corn.

At Suya Suya West African Grill in Philadelphia, the owner Dera Nd-Ezuma, who developed a love for tacos after immigrating from Abuja, Nigeria, to New Jersey in 2007, takes a similar approach. To amplify traditional dishes like steak marinated in Nigerian yaji, Mr. Nd-Ezuma leans into his love of tacos and offers them filled with chicken and steak suya in the requisite brown to-go container.

“There’s a reason why our restaurants are finding success,” he added. “People want to experience this cuisine, and they want to do it in a way that feels comfortable.”

Having gone to many of the city’s more conventional Nigerian restaurants, Mr. Nd-Ezuma said he sometimes found the atmosphere intimidating.

“When I get to go to African restaurants and I try to order, the menu can be a little bit overwhelming, so I can only imagine what it’s like for non-Africans,” Mr. Nd-Ezuma said.

Citing a psychology construct called “openness to experience,” which is a high predictor of whether someone would try different cuisines, Germine Awad, a professor of psychology at the University of Michigan, said that it’s not how something is served that draws patrons in, but rather their natural curiosity levels.

The growing interest in West African food within the restaurant industry aligns with immigration trends. “The more folks that come, the higher the demand for food that’s authentic and a true reflection of that community,” Ms. Awad said.

In 1980, there were about 40,000 West African immigrants living in the United States, according to data from the Pew Research Center. By 2019, that number had grown exponentially, to 890,000. Nigerian immigrants are the largest group from the region, with the most sizable communities living in cities like Atlanta, Dallas, Houston, New York City and Washington, D.C.

The inevitable expansion of fast-casual West African restaurants will continue bringing these foodways to the forefront of American dining — an overdue change, Ms. Awad believes, in the culinary world.

“It’s not just enough to have these restaurants available to people, this cuisine has to be recognized for how complex and amazing it is,” she said. “That’s the true next step for expanding the idea of the average culinary experience in the United States.”

At Teranga in San Francisco (no relation to Mr. Thiam’s restaurant), the Senegalese chef Nafy Flatley-Ba creates dishes like chicken drumsticks marinated in baobab, tamarind and Dijon, a family specialty. Highlighting Senegalese flavors is a top priority for Ms. Flatley-Ba, but equally important is showing that women can and should play a leading role in contemporary West African dining.

“It hasn’t been easy to introduce fast-casual, yet super nutritious and healthy West African food,” Ms. Flatley-Ba said. “But I have been doing it.”

Some conventional West African diners might complain that the foods at these fast-casual restaurants isn’t traditional. But that’s not Mr. Amosu’s primary concern at ChòpnBlọk. The restaurant is a chance to revel in his heritage, by creating dishes that expand on the narratives of the region’s cuisines.

“Our stuff bangs, too, and everybody should know about it,” Mr. Amosu said. “There’s no reason why we should be so insular with the pride that we have for our culture.”

“It’s all about finding the balance of being both authentic and contemporary, you know, and open for a new audience,” Mr. Agwu said.

The menu reflects multiple cultures, integrating American ingredients like kale and avocado into their suya bowls, which can come with shrimp, chicken, eggplant or tofu marinated in suya spice. But the real common ground, Mr. Agwu said, comes on the side.

“Americans love sauce,” Mr. Agwu said. “We have to give the people what they want.”

What We Know About the Election From Early Voting

Alberta’s ‘Fair Deal Panel’ submits report; public won’t see it until ‘worst’ of COVID-19 is over