Senior officials in Pyongyang insis the country’s efforts to protect its citizens from contracting the virus have been successful. But foreign observers believe North Korea’s claims are simply a bid to warn off foreign foes and appear strong to its population.

They say Kim Jong-un fears any signs of weakness will be exploited by perceived enemies he believes could try to mount a military invasion if his own army’s strength appeared compromised as a result of the pandemic.

Pak Myong Su, director of the anti-epidemic department of North Korea’s Central Emergency Anti-epidemic Headquarters, told reporters: “Not one single person has been infected with the novel coronavirus in our country so far.

“We have carried out preemptive and scientific measures such as inspections and quarantine for all personnel entering our country and thoroughly disinfecting all goods, as well as closing borders and blocking sea and air lanes.” 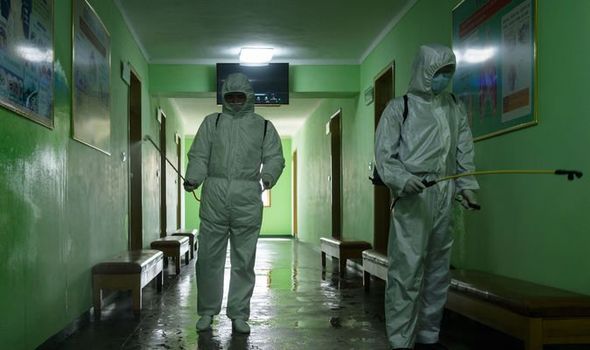 North Korea has taken major steps to prevent the spread of the virus within its borders, including the quarantine of whole areas close to the Chinese border, cancelling important cultural events and setting up a quarantine centre in a large Pyongyang hotel.

The government isolated foreign residents and those who recently had been abroad to China and ordered citizens to wear facemasks while in public.

But eyebrows were raised when the state ordered the hasty cremations of patients who mysteriously died in what authorities claimed was the flu. 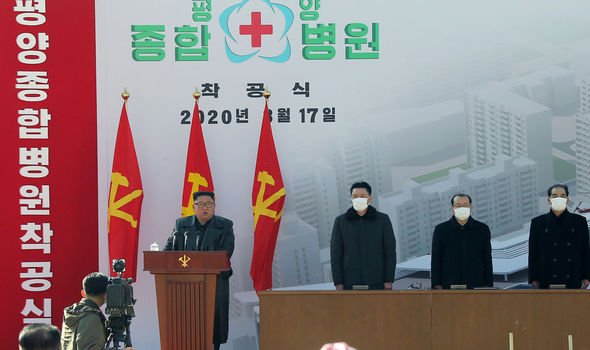 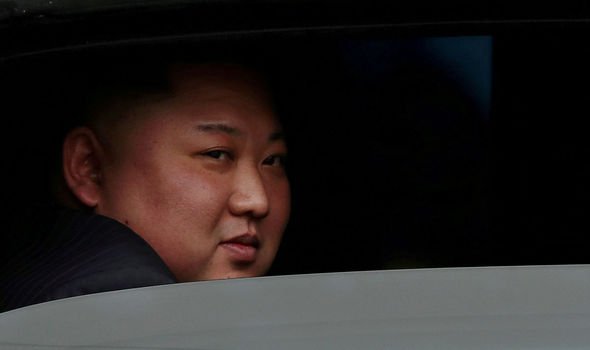 And outside experts say it is highly likely coronavirus crossed into North Korea from China in the early days of the epidemic.

Others believe the preventative measures appear to be reactionary, and focused on keeping leader Kim Jong-un and his inner circle safe from COVID-19.

Susan Thornton, former acting assistant secretary of state for East Asian and Pacific affairs, told Radio Free Asia: “I speculate that they are likely worried that, if outsiders believe there are many cases in North Korea, it would affect their military readiness and their ‘enemies’ might try to take advantage.

“They likely want to dispel publicly to foreigners any notion that they are distracted or weakened by COVID cases.”

“I don’t think their efforts to dispel suspicion will be credible to outsiders, but they are not likely focused on that.”

Bruce Klingner of the Heritage Foundation said North Korea wanted to project an image of strength in the face of the spreading virus.

“The regime’s message may be directed at both domestic and international audiences to allay internal concerns while warning foreign opponents not to take advantage of the situation. 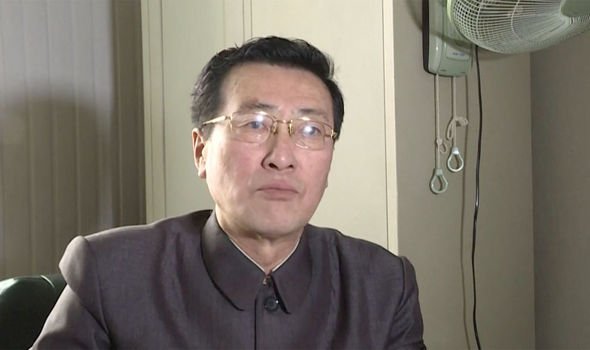 She said: “It is highly unlikely that North Korea has zero cases as the regime keeps claiming, given that it’s between two countries that have a high number of cases in China and South Korea and the porous border with China.

“Since the crisis bloomed, the regime has been trying to show how it has the situation under control and I see the recent press conference as a way to reinforce that message via a representative of the public health bureaucracy.”

Snow radar LIVE: Where is snow falling right now in the UK? When will it hit your area?

Changes Coming at the Top of Unibail-Rodamco-Westfield?