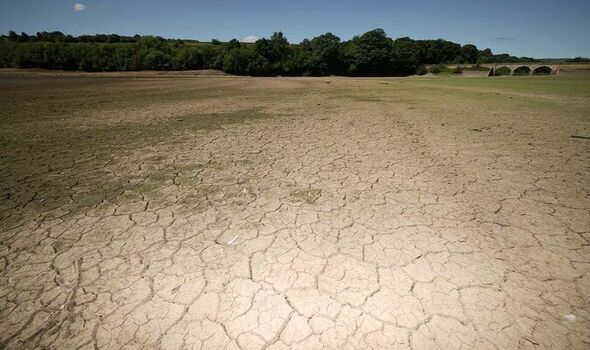 Yorkshire Water has warned that water levels at some reservoirs are already at their levels lowest for decades. In fact, reports suggest that the amount of stored water is now the same as in 1995 – when supplies ended up being brought to the area by tankers.

During that drought, some parts of the region came within 10 days of running out of water, the Mirror reports.

However, Neil Dewis, head of water, told the BBC the situation was “very different” from that summer 27 years ago. He explained that the company had invested in the network, including upgrading leaking pipes.

Urging people to consider their water usage, he said: ‘We came into March with stocks very nearly full, as we’d expect.

‘It doesn’t feel like it’s been a great summer, but there’s been barely any rainfall since then, that’s why stocks are currently low.’

However, Yorkshire Water said they can’t rule out a hosepipe ban and are urging the public to spend at least a minute less the shower suggesting customers sing Bon Jovi’s ‘Livin’ On A prayer’ to cut their shower time to four minutes. 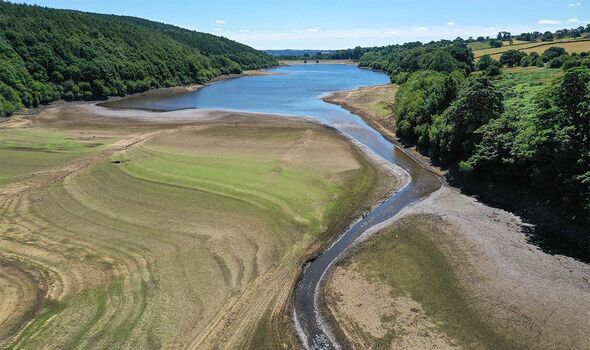 Photographs from across the country show the impact that the ongoing heatwave has had on water levels, with a picture of a couple walking across the dried-out floor of Scammonden Water going viral. The site is a reservoir that supplies Huddersfield in West Yorkshire.

Reservoir levels in Cornwall and Devon are also at their lowest point in decades and bottled water is still being handed out on the isle of Sheppey in Kent after a water mains burst leaving many residents without running water.

Things are only expected to get tougher as the Met Office predicts temperatures to hit the mid to high 30s while forecasting models even suggested 40C is possible from this weekend.

The Met Office now believes there is a one in five chance that Britain could see its hottest ever temperature. They described meteorological models indicating the extreme heat could hit a never seen before 40C as ‘significant’.

The heatwave has already prompted some hospitals to declare a ‘critical incident’ with calls from the Lib Dems for a second Cobra meeting into the NHS crisis. Their warnings come as the Ambulance Service warns it is ‘on the brink’, activating their highest alert level four, which warns of the possibility of failings in the service.

Hundreds of summer events have also been cancelled ahead of the record-breaking sunshine expected including school sports days, dog shows, cheese markets, carnivals, and open days.

There is even the possibility that some binmen may be forced to halt collections. This comes after one worker, Lee Moran, 50, carried out a protest by wearing a £60 high-vis kilt he ordered from Canada, after bosses told him no shorts.

The dad-of-three said: ‘We’re sweating in these trousers, we’re at risk of collapse.’

Ben Grabham, head of environmental services at City of York Council, said their crews wear trousers to protect against sharp objects but said they were reviewing operations but added: ‘…we’re not sure a kilt will necessarily be the right option for our staff,’ he said. 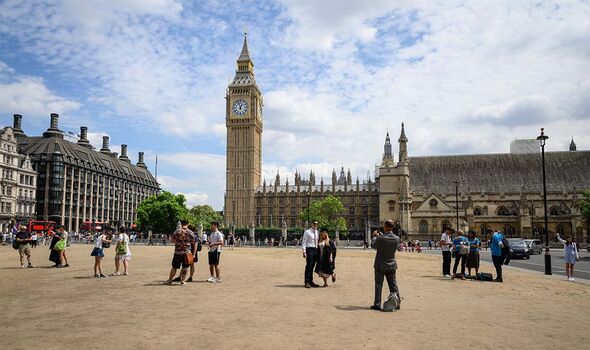 A severe weather emergency response has been activated in London to help homeless people and prompt councils to provide emergency accommodation and support for vulnerable people sleeping rough.

Humans are not the only ones feeling the heat. In fact, all over the UK birds have been falling from the skies. According to Swifts UK the heatwave is causing chicks to become grounded.

As the Met’s meteorologist, Jonathan Vautrey, told The Mirror: ‘The peak we are expecting brings exceptionally high temperatures for the UK.

‘They are well above average and it’s not something we see on a regular basis so people will need to be wary of that and take precautions when they are out and about.

‘There have been some model runs previously which put the value of 40C in one of their runs. We have to keep an eye on it as this is still a significant thing that a model would want to put 40C anywhere in the UK.’

Yet, in the North East on Sunday temperatures will be pushing 28C and in Yorkshire, the north-west including Manchester, it will be low to mid-30s by Monday.

Simon Wilson: All I want for Christmas is … the Swiss solution