On Roosevelt Island, the Graduate hotel’s 18th-floor Panorama Room offers wide vistas of the city, and a new appreciation of its overlooked enclave. 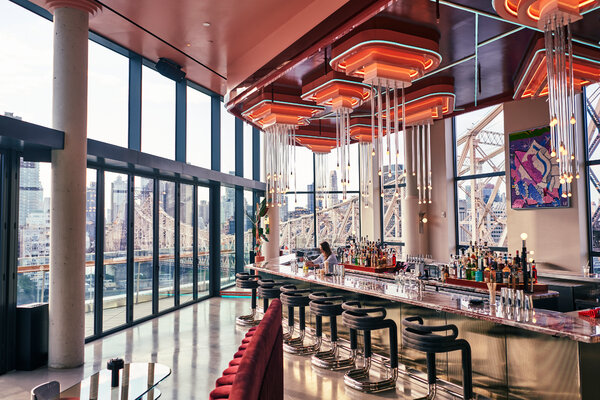 Roosevelt Island, which perfectly but rather anonymously bisects the East River, has been home to a several hospitals over the years. Soon, however, it will dispense a different kind of medicine.

Graduate Roosevelt Island, which opened in June and is the only hotel on the island, will in mid-August open Panorama Room, a sprawling, glass-enclosed cocktail lounge on its 18th floor. The high-ceilinged space has 168 seats and a huge red-marble bar with stools on all sides. It also has views that — even in a city that specializes in views — can safely be called unique. The Queensboro Bridge looms over the north side of the bar. The southern vista takes in Queens, Brooklyn, Manhattan and a good length of the East River and all its boat traffic.

“We wanted to create the idea of a lighthouse up here,” said Med Abrous, a New York native and Los Angeles hospitality entrepreneur who, with his partner Marc Rose, runs the bar. “Your connectivity to the water is undeniable.”

The vistas can be dramatic in more ways than one.

“Being on the island, you really feel the changes in weather quite quickly,” said Estelle Bossy, the beverage director and a veteran of Del Posto. Like many New Yorkers, she had never previously visited Roosevelt Island. “It’s amazing.”

Ms. Bossy has put together a list of drinks that reimagine several oft-maligned cocktails from the late 20th century. Her lychee martini includes gin infused with fresh lychees and lychee stones; lychee and maraschino liqueurs; crème de cacao; and blanc vermouth. The amaretto sour is built on two different amaros from Italy, grappa, lemon juice, sherry, aquafaba, bitters and just a touch of Amaretto. The Long Island Iced Tea, here named after nearby Long Island City, is made with clarified lime juice and homemade cola syrup.

“These drinks serve as a metaphor for Roosevelt Island itself,” she said. “In plain sight but neglected and underappreciated by New Yorkers for decades.”

Panorama Room’s arrival follows the opening of the hotel restaurant, Anything at All (named after a quote in “The Great Gatsby”), which began service in June.

Its reputation as being isolated from the city notwithstanding, Roosevelt Island can be reached in a surprising number of ways, including car, ferry, subway and the famous, eye-catching tram. Mr. Abrous expects to attract not only hotel guests and islanders, but also people from all over the city.

“The pandemic has shown that a lot of people are interested in traveling for an experience,” said Mr. Abrous — even if that experience is to finally visit an island that most New Yorkers see only on subway maps.