Russia MOD posts video of their hypersonic missile in February

Sources familiar with the efforts said today (Wednesday), the US Air Force successfully tested the Lockheed Martin hypersonic missile this week, days after a similar attempt failed. The test comes against a backdrop of growing concerns Russia and China have had more success developing their own hypersonic missiles.

Hypersonic weapons travel at several times the speed of sound, which in theory would make them very difficult to detect using conventional techniques.

On June 29, the US Department of Defense confirmed a flight test of a hypersonic missile system in Hawaii had ended in failure as a result of a problem which took place after ignition.

The test, undertaken at the Pacific Missile Range Facility in Hawaii, was meant to launch the Common Hypersonic Glide Body atop a two-stage missile booster. 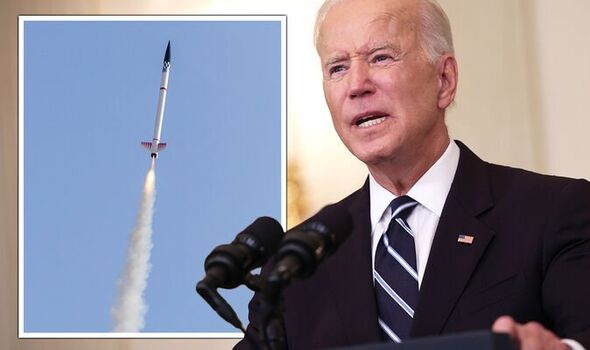 The booster is specifically designed to launch the system and bring it to speeds exceeding of Mach 5.

At that point the glide body detaches and uses its speed to reach the target.

Putin has make frequent boasts about his country’s advanced hypersonic technology, last month bragging that Russia has missiles which “no other country has”.

If accurate, it marked the first use in the Kinzhal, which translates to Dagger in English, with the missile probably launched from the air via a MiG-31 warplane.

At the time, James Acton, nuclear policy specialist at the Carnegie Endowment for International Peace, said: “I don’t view it as that significant.

“I don’t know how much of an advantage Russia is getting from using hypersonic missiles.”

Back in 2019,Putin said the aim of such weapons was “to reliably protect Russia and our fellow citizens from external and domestic threats, to clearly anticipate potential risks and challenges and to improve their performance gradually and consistently”.

In a speech at the Grand Kremlin Palace he said workers accomplishing the production of the weapons were “critical to the state”.

He added: “Our army and navy have proved their high readiness, yet we intend to build up our defence capability and to deploy hypersonic, laser and other cutting-edge weapons which no other country has.

“However, this is not a reason for threatening anyone. On the contrary, we are ready to do our best to promote the disarmament process with the help of these novel weapons, which have been created exclusively to guarantee our security in the face of growing threats to our country.”

Putin, who ordered his invasion of Ukraine on February 24, has nevertheless raised eyebrows in recent days with his increasingly belligerent language, not least his challenge to the West to send its soldiers to meet those of Russia on the battlefield.

Britons make a noise for their health workers with weekly applause

Groups Trying to Open Golf to Young People Are Struggling Themselves

Coronavirus: Trudeau says irregular migrants will be turned away at Canada-U.S. border