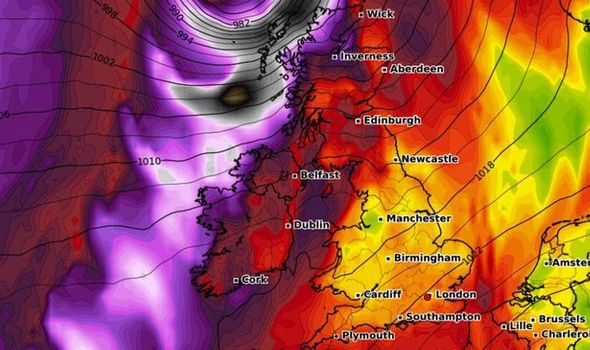 The Met Office has warned extremely strong winds are possible overnight into Monday morning, before easing through the day, in northern parts of Scotland. There is potential for wind gusts to reach 80 to 85 mph, and in excess of 90 mph in a few locations. The strongest gusts will be from a westerly or southwesterly direction. It has alerted of risks of disruption to travel, particularly ferry services.

Longer journey times and cancellations are possible on road and air travel, too. Some roads and bridges might close.

The local authorities most likely to be affected by the winds are Highland, Na h-Eileanan Siar, Orkney Islands, the Shetland Islands and Argyll and Bute, with meteorologists urging people to watch out for flying debris.

Damage to buildings as well as large waves and beach material being thrown onto sea fronts, coastal roads and homes could also put residents in danger.

The announcement comes just hours after the Met Office issued an early morning yellow ice warning across the northern tip of the UK due to affect parts of Cumbria, large swathes of Scotland and most of Northern Ireland.

The Met Office said: “Icy patches may cause some travel disruption this morning.”

They advised extra care to avoid injuries from slips and falls and some untreated patches of ice on roads, pavements and cycle paths.

Speaking before the warning was announced, a Met Office meteorologist told Express.co.uk Britons should be extra careful during Friday’s extreme conditions.

She said: “Take extra care on the roads and perhaps drive with extra caution in the morning.”

Afghanistan: ‘Very high risk of terror attack’ against the evacuation operation by UK and its allies – UK source

Groups Trying to Open Golf to Young People Are Struggling Themselves