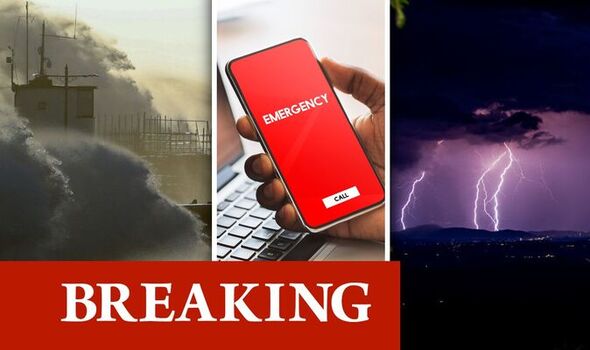 The new system will focus on events such as extreme weather, warning the public when there is a risk to life. The announcement comes after record-breaking heat waves followed by flooding in some parts of the country.

The emergency alerts will be broadcast from mobile phone masts and will send urgent messages to more than 85 percent of mobile phones in the affected area.

The messages in the alert system will give details about the danger faced – whether that is local flooding, storms or wildfires – and tell the public what to do and how to seek help.

Ian Cameron, Director of Markets at the Met Office, said that the alerts would be “imperative” as the UK prepared for more common extreme weather events.

Mr Cameron said: “The right messaging helps people take action to stay safe. It is clear that we are seeing an increase in the number of extreme weather events in the UK and overseas.

“Just this summer we have seen temperatures in the UK exceed 40C for the first time on record, followed closely by the heatwave which ended earlier this week.

“Communicating effectively is imperative so we can warn and alert people, ensuring they are aware and have more time to take action and look after themselves, their friends and family.”

The new measures were announced by Lead Minister for Resilience and Chancellor of the Duchy of Lancaster, Kit Malthouse MP while on a visit to the Met Office in Exeter.

He went to see how the Met Office was using its expertise to help Government planning during extreme weather events, most recently the extreme heat affecting much of the UK.

Mr Malthouse said: “We will launch a new public emergency alerts system in the Autumn which will focus on extreme weather, revolutionising our ability to ‘warn and inform’ people who are in significant and immediate danger.”

While You Were Sleeping: 5 stories you might have missed, Aug 23

Hurricanes: A guide to the world’s deadliest storms