Strong winds have already wreaked havoc in many regions this week, with gusts peaking at 76mph at Capel Curig in Wales yesterday. But more bitter conditions are on the way as low pressure is forecast to sweep a new cold chill over the UK from a northerly direction. Temperatures could plunge to -3C in north-western regions on Thursday, including Carlisle and the Lake District, according to WXCHARTS.

Further down in Yorkshire, lows of 0C could also strike Leeds and York on the same day, while London and Kent in the south-east are slightly warmer at 1C.

The latest temperature anomaly maps from WXCHARTS show the whole of the UK turning different shades of blue on Thursday, May 6, as the cold air hits.

Blue indicates temperatures far colder than usually expected at this time of year.

On Thursday, temperatures in the south, West Midlands and Wales could be 2C-4C colder than usual. 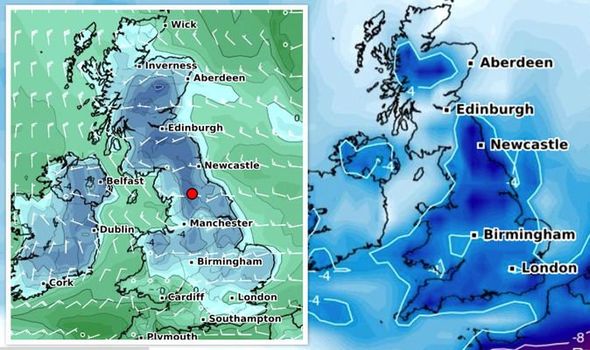 In the north east, the difference could be even starker at between 6C-8C colder than usual.

WXCharts’ snow map indicates a rare May snowfall could be expected, with parts of the north-west forecast to receive between 1cm and 2cm of snow. 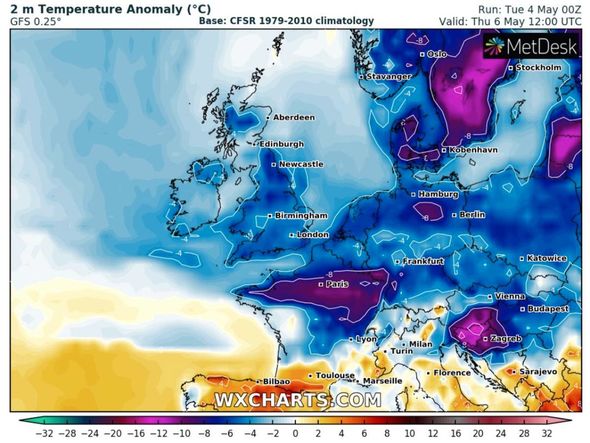 “Tomorrow brings a mix of sunny spells and showers. In the north sleet or wet snow could fall to low levels at times. Temperatures remain well below the seasonal average.

“During Thursday outbreaks of rain spread eastwards across southern Britain. There is some uncertainty about their northern extent, but most probably stay to the south of London.

“Other areas have a good deal of dry and bright spells, but there will be showers in the north which could be wintry over the hills. Cold for early May.

“Changeable and chilly weather is expected to continue through the rest of the week. There is a risk of heavy spells of rain pushing up from the southwest later on.” 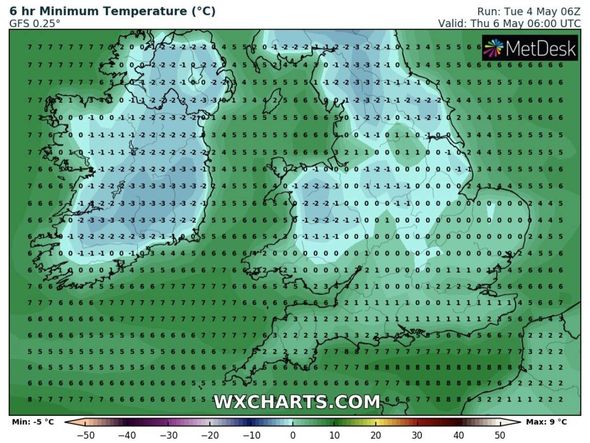 Paul Michaelwaite at Net Weather added northerly winds are expected to bring a “wintry flavour” throughout this week.

He said: “Today (Tuesday), we’re back into the familiar theme of sunny spells and showers.

“The winds are still blustery and will stay that way through much of the day, just slowly easing back.

“They’re blowing down from a cold north or northwest direction, so there’ll be a distinct chill in the air. However, the more sheltered south of England will see temperatures in the teens. 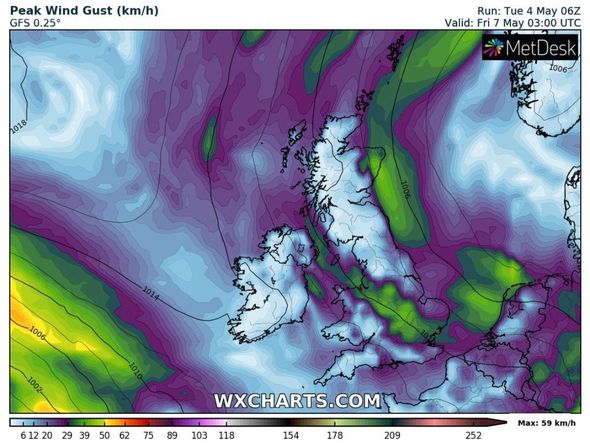 “The showers will become increasingly widespread into the afternoon, with some potentially merging into longer spells of rain.

“Some of the showers will be heavy and thundery with hail, plus over the high ground of northern England northwards, it’ll be cold enough for them to fall as sleet and snow.

“This evening and overnight will see a tail of showers clearing through Wales, central and southern England, but away from northern and western facing coasts, many parts will become dry with a widespread frost forming from the midlands north.”

He added the cold air could move down the UK from the north during the week, bringing snow and freezing temperatures along the way. 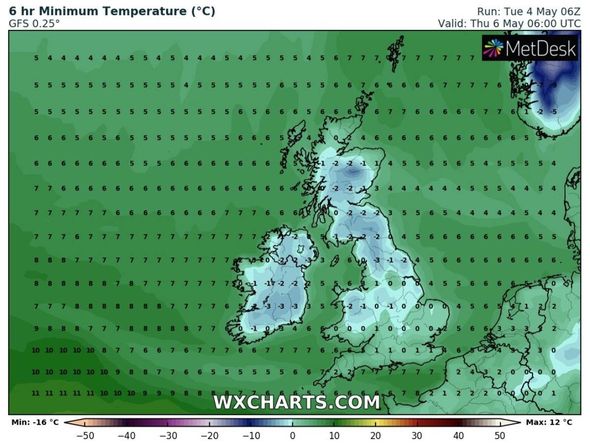 Mr Michaelwaite said: “Increasingly cold air will also be reaching down from the north into Scotland as the night wears on, bringing showers further inland, with many of them falling as sleet and snow.

“Another day of sunshine and showers then follows on Wednesday, with a wintry flavour to many of them across northern Britain and particularly up over the hills.

“It’ll be another cold day for the time of year, with maxes of 7-12c generally, with a chilly northwest wind knocking the edge off of those values.

“Another cold night will follow, with a widespread frost as most showers die back to the coasts.” 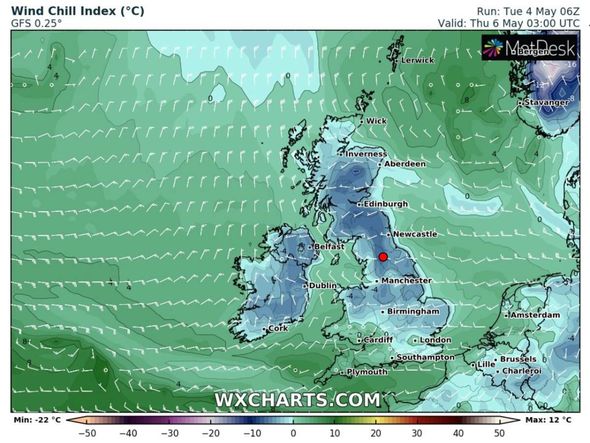 The BBC’s weather forecast between Saturday, May 1, and Sunday, May 9, also predicted low pressure to push in “chilly northerly winds”.

The forecast said: “The first week of May will see a drastic change in the weather for the UK from the second half of April.

“As high pressure, which has been a frequent visitor to us in recent weeks, shifts away to the south, low pressure weather systems will push in from the west and make for an unsettled week with some episodes of heavy rain and stronger winds.

“The middle of the week is likely to see sunshine and showers with a chilly northerly wind. 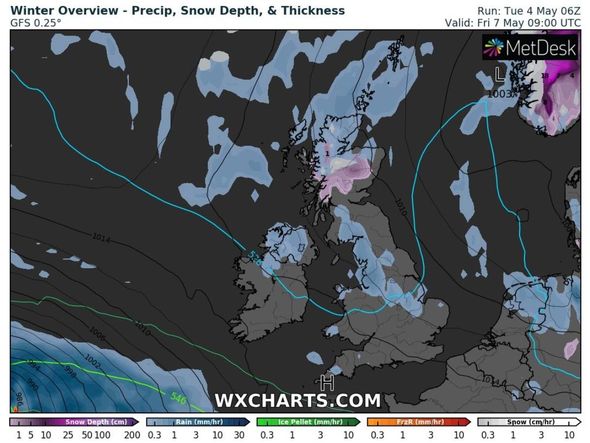 “Some showers may bring hail or wintry weather in places.”

The Met Office added snow could fall on low levels in the north tomorrow.

The forecast said: “Today, many parts are cloudy with showers or longer spells of rain, some heavy, especially in the north. 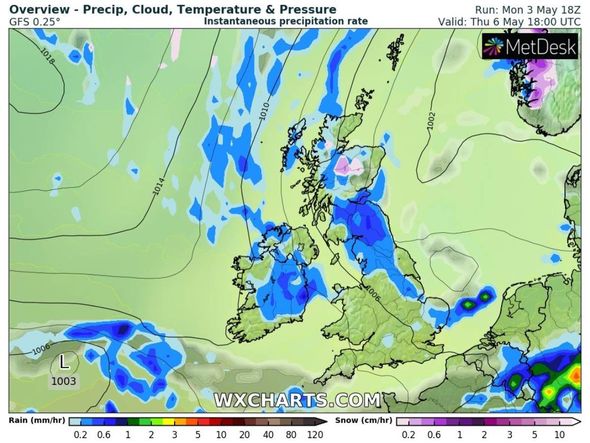 “Wednesday sees sunny spells and showers, some heavy with hail and thunder, especially in the north and east. Snow on hills, also to low levels in the far north at first. Cold.

“Outlook for Thursday to Saturday is sunny spells and showers through Thursday and Friday with overnight frost in places.

“Rain and strong winds spreading north and east through Saturday as it becomes warmer in the southeast.”

China to push on with opening capital markets to foreign investors