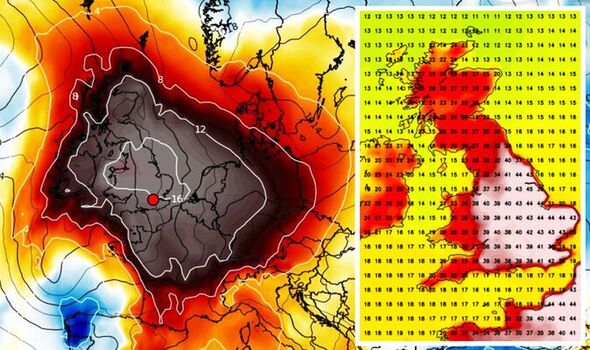 Temperatures on Monday will rocket higher than Spain, France, Italy, Malta and the Balearic Islands as a 1000-mile heat bubble smothers the nation.

Parts of Britain could eclipse notorious hotspots such as Seville, in Spain, and the south of France, experts say.

Jim Dale, meteorologist for British Weather Services, said: “This is a heat pool, and is similar to an Arctic cold pool we sometimes see in winter.

“It is a fluid bubble of heat which if it moves over the UK, may push temperatures in isolated spots higher than anywhere else in Europe.

“It is not completely out of the question that the UK could see a window over the intensely hot period where temperatures are the highest in Europe.”

Seville is predicted to hit 41C next week while Malta hovers in the low-30Cs, Nice, in France, reaches 32C and Ibiza hits 32C.

Even Morocco, in North Africa, will be cooler than the UK at 32C while Bangkok, Thailand, stalls at a relatively chilly 33C.

The extreme heat has prompted warnings not to ‘play in the sun’ and brace for power cuts, travel chaos, water shortages and mobile phone outages.

Overnight temperatures will hover above 20C through the start of the week as Britain swelters in unbearable ‘tropical nights’.

Government officials have issued a raft of warnings as the UK boils in temperatures extreme even for desert climates.

Healthy adults together with the elderly and vulnerable are warned to stay out of the sun to avoid the risk of deadly heatstroke.

Met Office chief executive Penny Endersby said: “I can say that the extreme heat that we are forecasting right now is unprecedented.”

“In the UK, we are used to treating a hot spell as a chance to go and play in the sun.”

“This is not that sort of weather.”

“Our lifestyles and our infrastructure are not adapted to what is coming.” 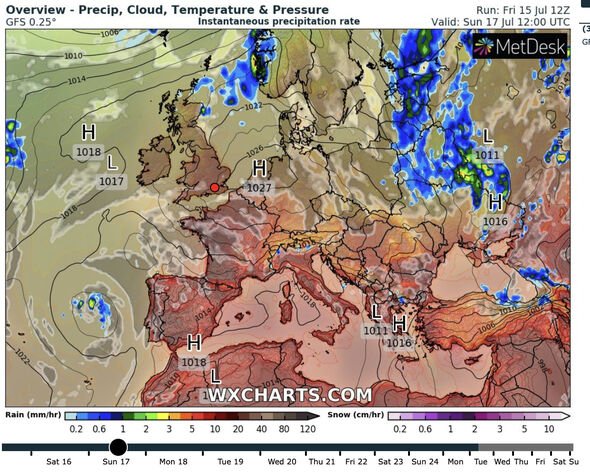 A plume of roasting air will be carried into Britain between high pressure over the country and low pressure to the west.

The two systems will act like a funnel, streaming a channel of air through the Continent from North Africa.

Britons are warned not to underestimate the lethal threat posed by heat never before experienced in the UK.

Mr Dale said: “There is now every possibility of 40C being reached on Monday and Tuesday, and there is absolutely no question–these temperatures can and will kill.”

“This hot plume will arrive from North Africa after having travelled up through Spain and France towards the end of the weekend.”

It is the first time the Met Office has issued a red ‘extreme heat’ weather warning which remains in force across south-eastern and central England on Monday and Tuesday.

A less-severe amber warning has been issued across the rest of the country at the start of next week.

Health risks will be compounded by record overnight temperatures which will make it impossible to get any respite.

Britons are urged to reconsider daily activities to avoid exertion and lethal overheating.

“It is important people plan for the heat and consider changing their routines.”

“This level of heat can have adverse health effects.”

Met Office meteorologist Alex Deakin said temperatures will rocket into the low-30Cs on Sunday before hitting 40C next week.

Britain is facing ‘serious’ problems as temperatures rocket to levels never before experienced in the UK, he warned.

He said: “We have issued our first ever red extreme heat warning.”

“We are particularly concerned about temperatures building into the early part of next week–unprecedented temperatures.”

“We are looking at getting up to 40C, there is a very good chance we will beat the temperature records.”

“This heat is building, and it is going to cause serious problems.”