Weather forecasters detected up to 50mm (two inches) of rain falling within an hour in some areas on Wednesday when the heatwave broke with a vengeance. Those rainy days have done little to change the UK’s fortunes, as drought warnings and hosepipe bans remain in several southern English regions. Many Britons likely hope the rain doesn’t douse their weekend plans, but forecasts show they may have to make alternative arrangements.

Where will it rain this weekend?

Weather charts show the UK has not seen the back of August’s new rainy trend.

According to maps from WXCharts, lingering rain has spent the morning in Scotland, Northern Ireland and southeast England.

Two systems, one coming from the Atlantic Ocean and another from mainland Europe via France, have showered Britons with between 1mm and 2mm of rain per hour since 9am. 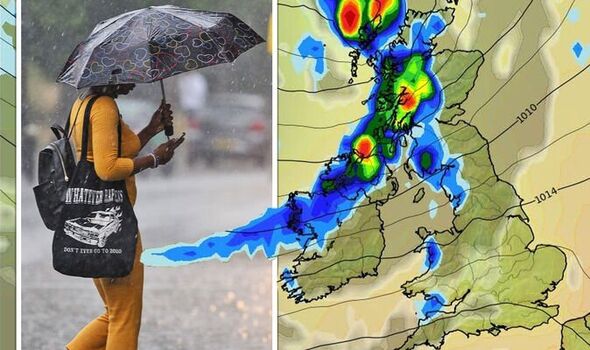 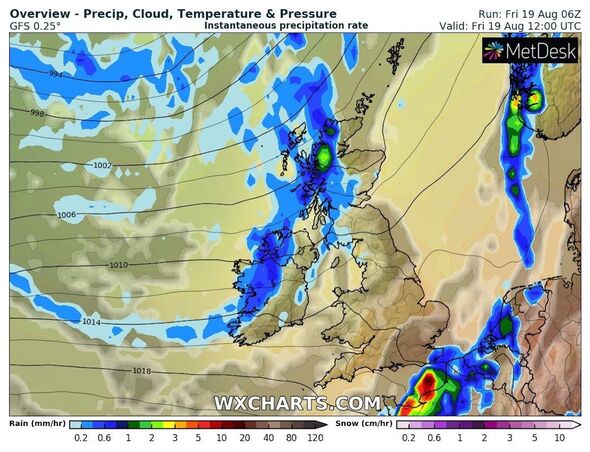 They should depart British shores by 9pm, making way for clear skies until 6am on Saturday.

The weekend’s first showers will settle over the west coast and concentrate rain in Scotland and Northern Ireland.

Scots can expect up to 8mm per hour over the northwest around Glasgow, while Northern Irish residents see similar amounts off the north coast.

Lesser amounts, around 0.6mm of rain per hour, will fall over North Wales, Southern Wales around Bridgend and the Somerset coast at Minehead and Lynton. 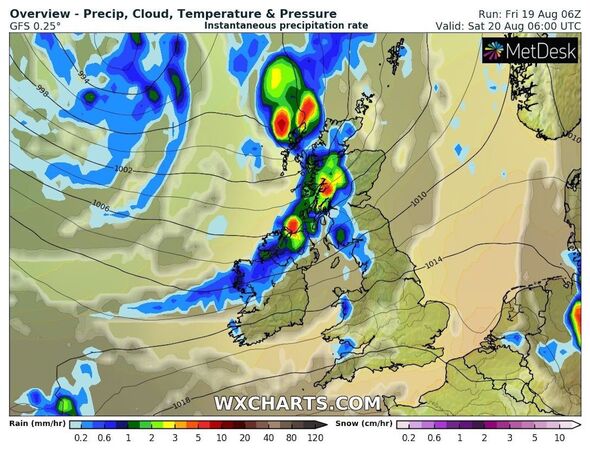 The rain from Scotland will gradually move south throughout the day, casting a band across Northern England from Newcastle on the east coast to Blackpool, the Yorkshire Dales and Lake District to the west.

By the end of the day, around 6pm, those showers will have moved to Manchester, Liverpool and northwest Wales.

They gradually dissipate over the south by 12am on Sunday, August 21, when only light showers remain over Wales.

The rest of that Sunday will end a washout weekend for Scotland and cause brief showers over southern England. 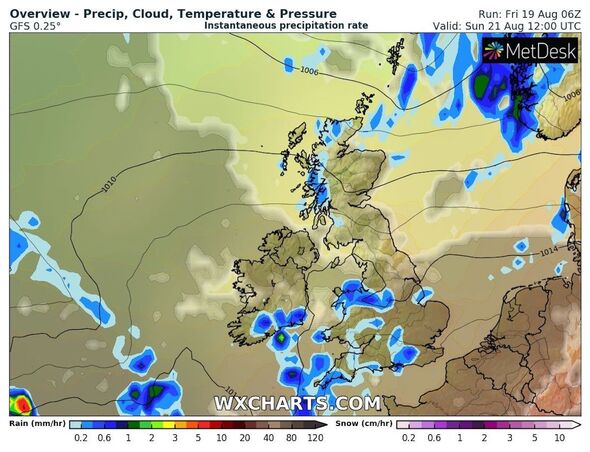 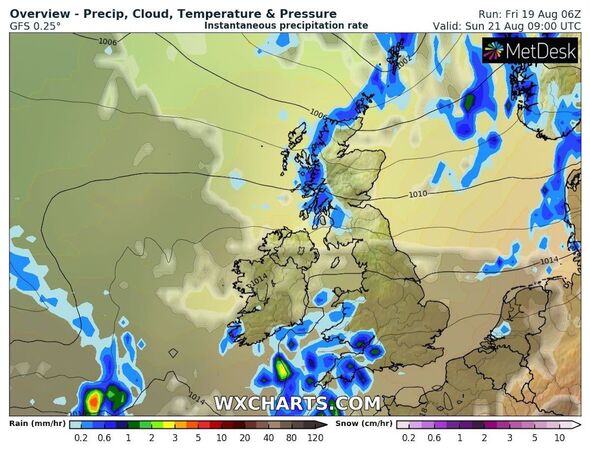 The southwest coast should see 0.2mm to 0.6mm of rain trickle in from 6am as the first sign of a larger system that will splinter throughout the day.

From 9am, the rain will intensify to 1mm per hour in South Wales at Cardiff, Bristol and Plymouth.

London, Lincoln, Southampton, and other nearby areas can expect brief hour-long showers between 12pm and 12am on Monday, August 22.

The showers that began on Scotland’s west coast early on Saturday will last for the whole day on August 21, only dissipating in the afternoon around 3pm.

The last week of August and early September promises much of the same weather-wise, according to the Met Office.

The agency’s long-range forecast – which covers August 23 to September 1 – predicts “stronger winds and showers” in the northeast and northwest, while the south remains dry with the occasional drizzle.

The country should return to “settled conditions”, staying sunny in the southeast as the north grows colder.

The latter half of the forecast suggests southern Britons can look forward to light winds and “plenty of sunshine” with “warm or locally very warm” temperatures.

One Colorado sibling has DACA. The other doesn’t. A Biden administration offers hope to both.