Hot weather is returning to the UK, with this week shaping up to be one of the hottest of the year so far. Up to 37C could be felt in the south of England on Friday, with warm and sunny conditions across much of the UK.

Maps from WXCharts – which gets its data from MetDesk – can be seen turning black with heat as they reach Friday, expected to be the hottest day this week.

Temperatures will begin to climb from today, before peaking on Friday, bringing a sunny weekend for much of the country.

Met Office metereologist Marco Petagna said conditions will continue to warm up as we head towards the weekend.

He said: “The trend is that things will get much warmer on Thursday, though there is a risk still of some cloud in the north west. 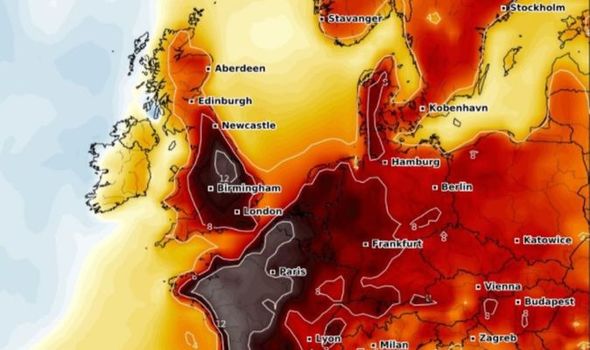 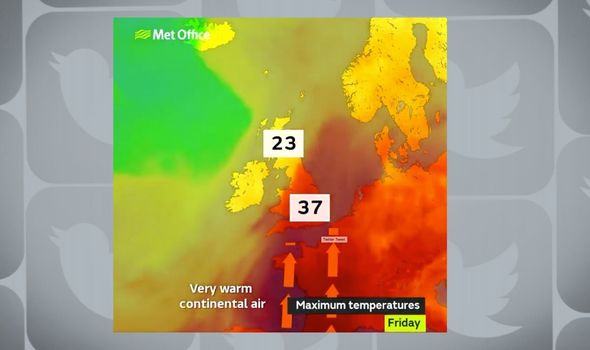 “For the north and the north-west temperatures will be hovering around the mid-20s.

“But the real heat and the best of the weather will be down south.

This would make the UK significantly hotter than popular tourist destination Ibiza, which is forecast to reach 29C on Friday. 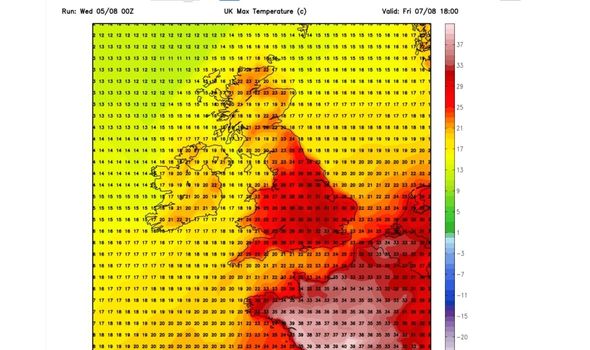 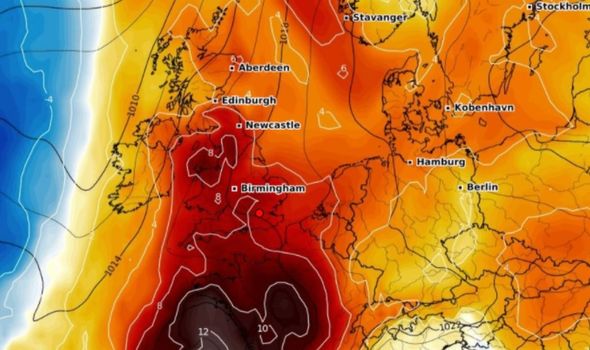 The UK will also be 10 degrees higher than Tenerife, which is forecast to reach just 26C on Friday.

“Computer models suggest a very warm or hot period from Thursday, lasting for as long as mid-month. 35C is possible again.”

However the hot weather could also bring dangers, with the Met Office issuing a level three health alert.

The alert is in place from midday on Thursday until 9am on Sunday – and is issued when temperatures are expected to reach a specific high on two consecutive days.

Weather experts say the prolonged hot weather can be “dangerous, especially for the very young or very old or those with chronic disease”.

The heat health alert is level three for the Southeast and East of England, and at level two for southwest England and the East Midlands.

Advice for heatwave conditions is: “Look out for others, especially older people, young children and babies and those with underlying health conditions. 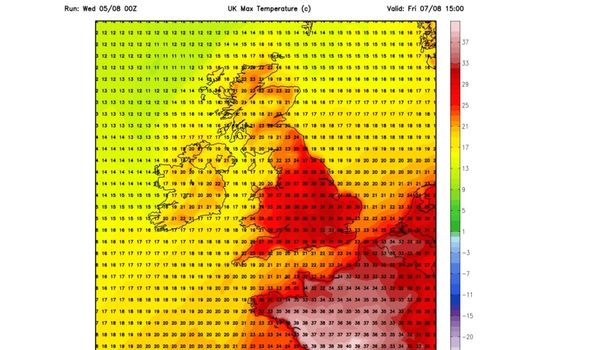 “Close curtains on rooms that face the sun to keep indoor spaces cooler and remember it may be cooler outdoors than indoors.

“Drink plenty of fluids and avoid excess alcohol, dress appropriately for the weather and slow down when it is hot.”

The Met Office warns: “There is a 90 percent probability of Heat-Health criteria being met between 12pm on Thursday and 9am on Sunday in parts of England.

“However, cooler and cloudier conditions with a few showers then expected to spread from the northeast later on Saturday”

Met Office Chief Meteorologist Frank Saunders said: “Most of us will see a spell of warm, summery weather later this week, with hot weather developing across southern parts of the UK.

“From Thursday temperatures will be in the low- to mid-20sC for Northern Ireland, Scotland and north Wales, but it will be much warmer across southern and central areas, with temperatures widely reaching around 30C, possibly 32C in the southeast of England.

“It’ll be another hot day on Friday with temperatures widely reaching 30C, or higher, in central, southern and some northern parts of England.

“It is likely to be hotter still in southeast England where 34C to 37C is possible.

“Saturday will likely be another hot day for southern and central parts of the UK, with heatwave conditions possibly being met in parts of southern and southeast England.”

France election polls: Who is leading in the race to be the next president of France?

‘A black eye’: Why political polling missed the mark. Again