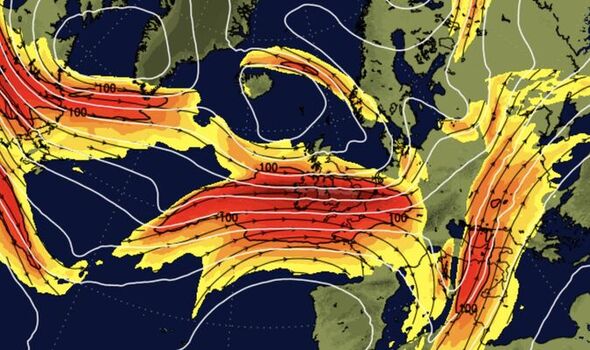 Warm air from by ex-Hurricane Fiona and Hurricane Ian will whip up stormy weather in parts of the country through the coming days. Northern Britain will get a soaking from one low-pressure system today before another hits at the start of next week.

Tropical air from the south battling cold air sweeping down from the Arctic will help power the jet stream, according to the Met Office.

“What drives the jet stream is the contrast between warm and cold, and with cold air heading south from the poles hitting that warmer air that’s been drawn up by those tropical systems, the jet stream is becoming enlivened.

“That strong wind high up in the atmosphere will impact our weather by taking areas of low pressure our way.”

The Met Office has advised people to watch the forecasts before making plans over the coming days.

Mr Deakin said: “It’s a blustery say on Saturday with a mixture of sunshine and showers.

“If you have plans for Saturday keep up with the forecasts.

“If you have plans for Sunday, it is a drier and brighter day, and most places will be dry and bright with a bit of sunshine. 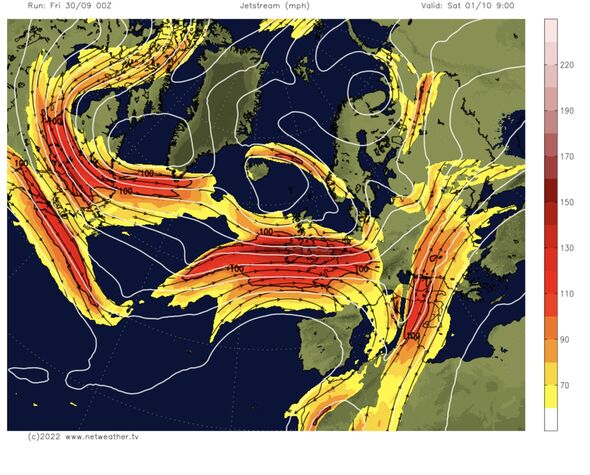 A ‘waving weather front’ will bring rain to southern England on Saturday before another low arrives on Monday, he warned.

Mr Deakin said: “Low pressure stays to the north on Saturday, and it continues to throw showers our way.

“Then we have this little waving front that threatens some rain across the south, and there is the potential for rain to come back across parts of southern England and South Wales.

Netweather forecaster Nick Finnis said: “A turbocharged 200 mph-plus jet streak racing across the Atlantic … is helping thrust a rather active and vigorous frontal system southeast across Britain [on Friday], ahead of a rather deep depression swirling around near Iceland over the next few days. 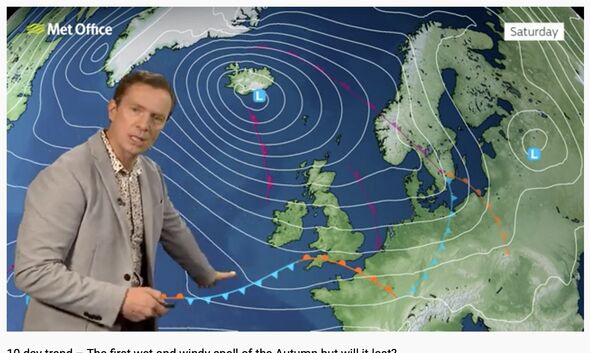 Despite the wet and windy outlook, Britons could be about to enjoy a blast of Indian Summer warmth.

Temperatures will rise next week as warm air is swept in from the south and high pressure in parts not affected by the rain drives sunny skies.

Jim Dale, meteorologist for British Weather Services, said: “Sunday will be slightly warmer than Saturday, perhaps with temperatures up a degree or two.

“But next week we will see temperatures rise even higher, and it is possible it will be warm through next week.

“This will be driven by warm south-westerly winds.” 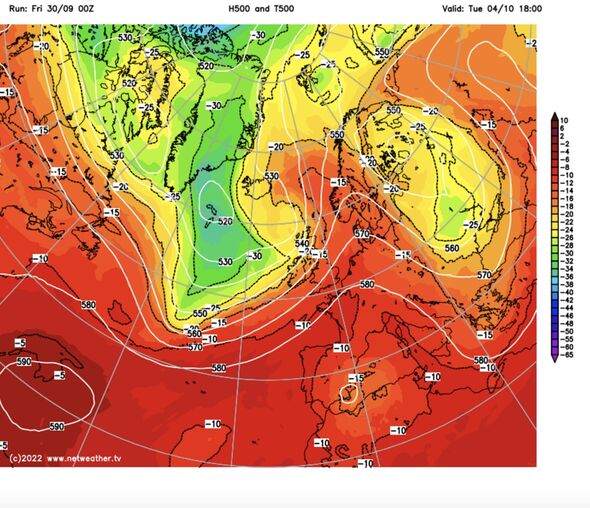 Long-range weather forecasters agree that after an unsettled weekend, Britain will warm up again.

Exacta Weather’s James Madden said: “The end of September is looking unsettled, but there are signs for a much warmer spell at the start of October.

“We could be looking at a spell of pleasant Indian Summer weather.”

The sunny forecast has prompted bookmakers to slash the odds on an October scorcher with Ladbrokes offering 7-4 on the hottest ever.

Spokesman Alex Apati said: “Temperatures are back on the up and it looks as though Brits could be treated to a record-breaking Indian summer.”

Melania Trump fury: How FLOTUS was humiliated amid shock comparisons to Michelle Obama

‘Abstention doesn’t do anything!’ Labour slapped down for pointless ‘party politics’ vote