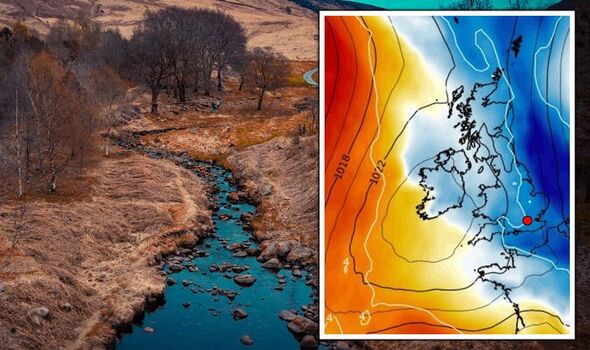 Weather scientists have confirmed an ‘unprecedented’ ‘triple-dip La Nina’ event in the eastern Pacific Ocean. La Nina marks an extreme cooling of sea waters around the coast of South America, and can affect global weather patterns. It is the counterpart of El Nino— a warming of South American coastal waters—and can weaken the UK winter storm season, driving dry and settled conditiions. 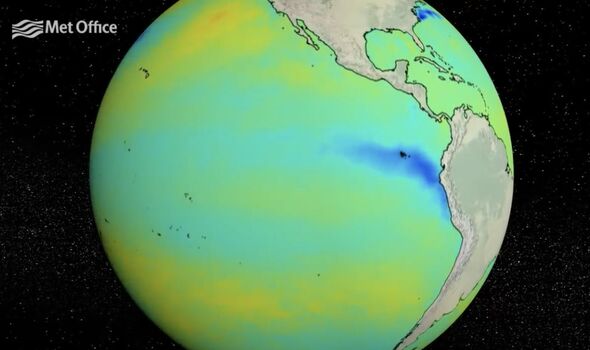 After the driest summer for more than 40 years left the nation desperate for autumn and winter rainfall, UK meteorologists are once more growing concerned.

British Weather Services’ Jim Dale, an expert on weather impacts and safety, said: “La Nina appears to be strengthening and is now into its third year.

“This is now verging on unprecedented conditions and will have an impact on global weather patterns.

“In the UK, it means we could continue to get dry weather through the rest of September, particularly in the south and the southeast which is desperate for rain.”

If La Nina strengthens through the end of 2022, it will have serious implications on Britain’s drought crisis, he warned.

He said: “This would bring the risk of continued dry weather to the UK through the next couple of months.

“Not only would that mean a continuation of the water shortages left over from summer, but it would extend the drought into next spring and summer.

“The dry weather would be worse further south across Europe, which is why southern and south-eastern Britain will be most at risk.” 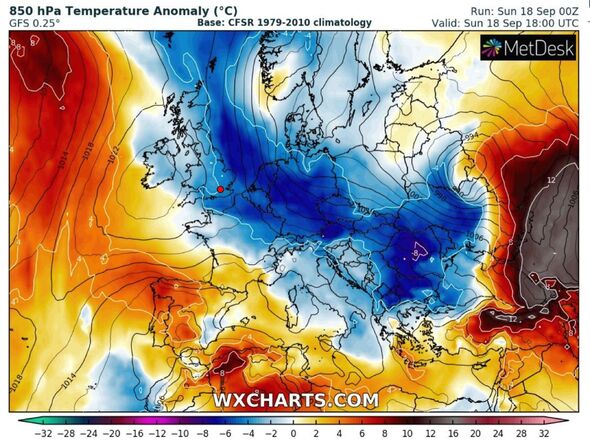 This causes cooler water to pool off the coast of South America, helped by the strong currents off the Peruvian coast.

The trade winds strengthen as part of the El Nino Southern Oscillation (ENSO)–the balance of high pressure near Peru and low pressure on the other side of the Pacific, near Indonesia.

After an El Nino event, which weakens or even reverses the trade winds, large pressure swings try to correct the imbalance, sometimes causing the trade winds to over strengthen.

The current El Nino has been confirmed to be in its third consecutive winter, a rare if not unprecedented event.

A statement from the Australian Bureau of Meteorology said: “Key atmospheric and oceanic indicators of the El Niño–Southern Oscillation (ENSO) show an established La Niña.

“Tropical Pacific sea surface temperatures have been cooling since June and are now at La Niña thresholds.

“Models indicate this La Niña event may peak during the spring [UK autumn] and return to neutral conditions early in 2023.”

It comes as short-range forecasts predict little to nothing in the way of rainfall through the next week.

High pressure, the driver for the hot, dry summer, is about to re-establish across the country.

Weather charts for the next seven days show only a sprinkling of showers down the east coast while the rest of the country, once again, parches.

It will also feel cold with overnight temperatures dropping to freezing in a chilly Arctic wind.

Met Office meteorologist Alex Deakin said: “The pressure trend through next week suggests that high pressure will hold on deep into next week.

“This means those weather fronts are likely to be held further out west and the dry weather will continue for much of the UK.

“There will be a chill by day and by night.”

Water reserves across swathes of the country were depleted through summer–the joint fourth hottest on record and the driest since 1976.

Hosepipe bans remain in force across parts of the south and the southeast, which have been hardest hit by the drought.

Water shortages during extreme dry summers are only restored with long periods of sustained rainfall through autumn and winter.

While La Nina threatens extended periods of dry weather in the UK, in Australia and Asia it brings the risk of flooding.

Netweather meteorologist Nick Finnis said: “It will be this century’s first “triple-dip“ La Niña, spanning three consecutive northern hemisphere winters and only the third since 1950.”