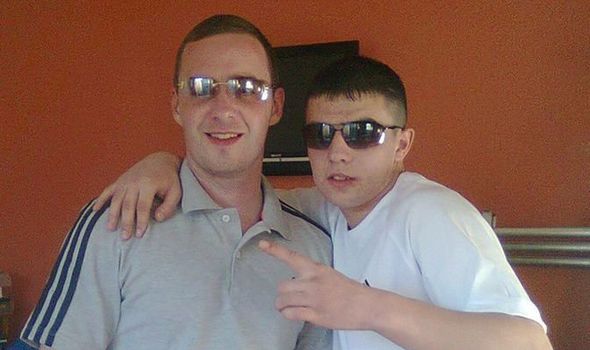 Graham Taylor, 31, Carl Freeman, 26, and Dean Maguire, 29, fled from police in a BMW 3 Series just minutes before the crash on Wednesday night. The car is suspected to have been involved in a number of burglaries in recent weeks.

Officers had seen the vehicle travelling erratically in Cheeverstown, Dublin, and a high-speed chase ensued.

But Irish Mirror reports the BMW drove onto the N7 on the wrong side of the road in a bid to evade police.

At that stage, Gardai pulled from chasing them because of the danger the gang’s route posed.

Just a few minutes later, at around 11.40pm, the car smashed into a truck in a head-on collision on the N7 near the Rathcoole exit in Dublin.

The BMW burst into flames and the three men were killed.

The driver of the truck, a man in his 40s, was taken to hospital where he is being treated for his serious, but non-life-threatening injuries.

The bodies of Taylor, Freeman and Maguire – who had over 200 convictions between them – were so badly burnt that a formal identification might not be made for some days.

Sources said last night it may even take dental records or DNA to do so.

The three men were associates of a major burglary gang based in Tallaght, Dublin, where they are also from.

As part of the mob’s way of working, they have regularly driven on the wrong side of roads as they fled gardai, in the hope that cops would not pursue them once they did so.

There’s an innocent man who was just doing his job driving a lorry left with serious injuries.

A source said: “The men are well-known to Gardai for carrying out a serious amount of burglaries on a consistent basis.

“The move to drive away from Gardai down the wrong side of the road is something that they have done before.

“And on previous occasions, it has worked for the gang to get away.

“But the sheer recklessness of it was shown in this incident. They’ve died as a result.

“But there’s an innocent man who was just doing his job driving a lorry left with serious injuries. And there’s the whole trauma of such an incident that comes with it too.”

As the BMW car had been pursued before the horror crash, the Garda Ombudsman was notified and they will conduct their own investigation.

As part of both that and the Garda probe, footage of the chase posted on social media will be examined.

Drug addict Freeman is well-known to gardai and had over 60 convictions including for thefts, burglaries and assault among others.

He once attacked an elderly couple in Wicklow in 2015 and was later convicted of aggravated burglary.

On that occasion, he grabbed a 65-year-old woman, who was suffering from cancer, from her bed by the neck and demanded cash. He also attacked her husband with a hurley.

Last night his partner posted a tribute on social media.

She said: “I can’t believe I’m even writing this with the heaviest heart please just someone slap me this is all a nightmare there is no such thing as god

“Look at u happy u we’re to good for this stupid sh***y world I’ll see you on the other side.

“My best friend and partner I can’t get my head around this.”

Taylor, the oldest of the three dead men, had more than 120 convictions which included burglary, criminal damage, an assault of a garda along with a long string of motoring offences.

He had already been banned for driving for 40 years when he led gardai on a chase in 2016.

That day, he sped at more than 120kph in a 50kph zone during the incident and also drove at the wrong side of the road, forcing cars to hard brake and attempt to dodge the hood.

Maguire, who has a rap sheet of more than 25 convictions, is also a convicted burglar.

Another source said: “Those lads did not have an ounce of respect for law enforcement or the law itself.

“They were all relatively young but each built up a lot of convictions.

“And despite being caught repeatedly, they would do their time and just come out and go back at it.”

The gang actively burgle homes throughout the country, staying in areas for short stints and ransacking homes.

They are so professional at what they do, they are often in and out of properties in less than five minutes.

They also use stolen cars – often from the UK – and regularly change the reg plates before dumping the vehicle after a number of weeks.

Boy, 5, on ventilator for four years leaves hospital to go home for Christmas