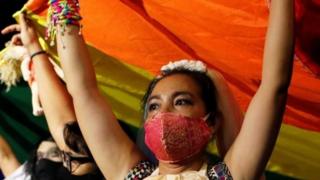 Hundreds of Thai gay activists have raised rainbow flags in Bangkok during a pro-democracy rally in the capital.

They danced and sang in the city centre, where police were deployed. There were no reports of any violence.

Saturday’s rally was the latest in a series of youth-led protests calling for the government to resign.

General Prayuth Chan-ocha seized power in a coup in 2014, and was later named as prime minister by the military-appointed parliament.

He said that LGBT groups in Thailand “do not yet have equal rights in society, so we’re calling for both democracy and equality”.

In recent days Thai pro-democracy activists have been defying a government ban on public gatherings amid an ongoing coronavirus outbreak in the country in south-east Asia.

COVID-19: Dominic Cummings warned PM government could be ‘negligently killing most vulnerable’ with lack of testing in May last year