ZURICH (Reuters) – Switzerland has nearly 9,000 confirmed coronavirus infections and 90 deaths from the disease, the Federal Office of Public Health said on Tuesday, adding it was premature to say the number of new cases was flattening out. 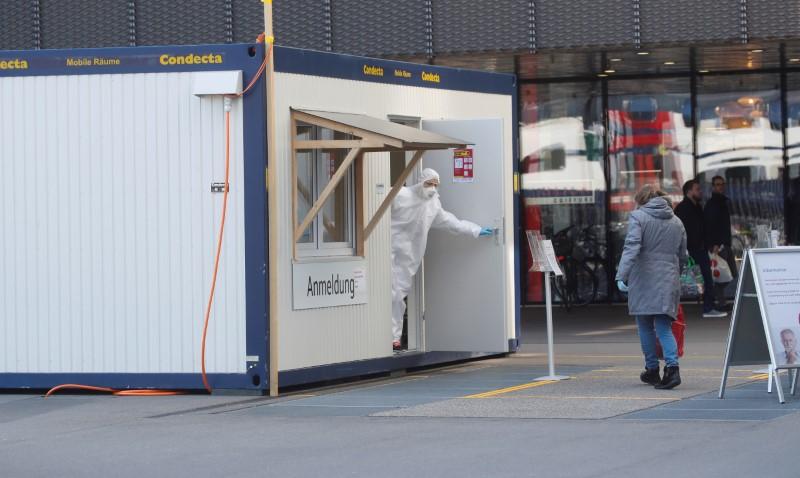 The new cases, which come on the eve of a government meeting over details of a blockbuster financial aid plan, rose by fewer than 1,000 since Monday, the data indicated, slightly less steeply than in recent days even as the country expands the number of tests it conducts daily.

“We will definitely need a few more days to be able to really speak of a consolidation of the numbers or the trend,” said Patrick Mathys, head of the health ministry’s crisis management division. “There is hope. I think that’s also what we cling to with numbers like that.”

Switzerland has stepped up its testing to around 8,000 people per day, the ministry said, with so far around 80,000 people tested in the Alpine republic since the crisis began.

Health officials said this uptick was providing them with a more complete picture of who is infected and from where.

“In contrast to other countries, this is quite a lot. From that point of view, I think we roughly know what is happening in Switzerland,” Mathys told a news conference in Bern. “No country knows exactly how many infected people are in its territory.”

Cautious optimism aside, the pandemic has sent the Swiss economy reeling.

The KOF Institute at ETH University cut its outlook, while Credit Suisse economists now saw the economy contracting by 0.5% in 2020, a fall softened only by the government’s economic aid proposals worth around 42 billion Swiss francs ($43 billion).

Cabinet ministers are due to address on Wednesday details of the plan to prop up a shaky economy where workers are being put on short working hours in record numbers as business were forcibly closed and employees told to stay home to help limit the spread.

“We’re in completely new territory here,” Boris Zuercher, head of the economy ministry’s labour directorate, told reporters. “We have a single experience, that from the financial markets crisis in 2009. And with the coronavirus, we are confronted by something with much, much bigger dimensions with regard to the new requests for short-term work compensation.”

Inside tiny house on historic estate visited by royalty on sale for £225,000