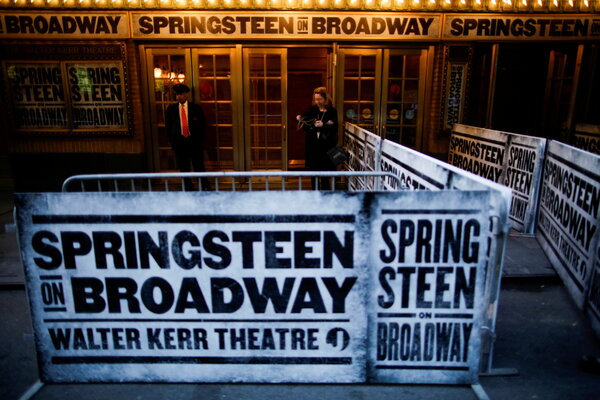 When Bruce Springsteen walks onstage on June 26 in the first show to return to Broadway, his audience will have had to prove that they’ve been vaccinated. And those inoculations have to be with F.D.A.-approved vaccines: Moderna’s, Pfizer-BioNTech’s, or Johnson & Johnson’s.

Bad news for the Boss’s fans among the 1.7 million Canadians who’ve gotten the AstraZeneca vaccine. “Burn in the U.S.A.,” The Toronto Star headlined its report on Wednesday.

The St. James Theater, where Mr. Springsteen will perform, describes the show as “a solo acoustic performance” and “an intimate night with Bruce, his guitar, a piano and his stories.” On Tuesday the theater posted an announcement about the upcoming shows.

“At the direction of New York State,” it said, “SPRINGSTEEN ON BROADWAY and the St. James Theatre will only be accepting proof of FDA-approved COVID-19 vaccines.”

Attendees under 16 are exempt, but must be accompanied by a fully vaccinated adult and show proof they tested negative on a recent coronavirus test. There are no exceptions for people who are unable or unwilling to be vaccinated.

The two-hour-plus show debuted in 2017 at the Walter Kerr Theatre and ran for 236 performances. Like those shows, the coming series will run Tuesday through Saturday. It is a demanding schedule for a septuagenarian rock star, but he has said he has no plans on slowing down after six decades onstage. “I’m at a point in my playing life and artistic life where I’ve never felt as vital,” Mr. Springsteen told The New York Times last year.

He also said the experience performing life cannot be replaced. “When I see young bands, I tell them, you’ve got to learn how to play live. It’s still important, and it’s an experience that cannot yet be simulated.”

Other Broadway shows will be returning in September. And The Toronto Star, for one, sees trouble ahead. The vaccination rules governing Mr. Springsteen’s show, the paper said, could “be just the beginning of bureaucratic vaccine woes, as the world starts to reopen with a patchwork of different approved shots.”