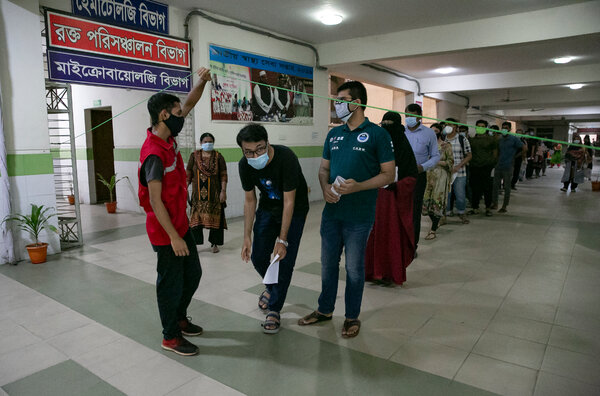 The pandemic has been a cruel blow for thousands of migrant workers in South Asia who are out of work or unable to return to their jobs abroad.

Countries like Bangladesh, India and Nepal rely heavily on migrant workers, who send billions of dollars home each year. But over the past year, many have lost their jobs and been forced to return to their native countries. Others still have jobs or have found new ones, but are struggling to make travel arrangements to take up the posts.

The lack of Covid-19 vaccines has compounded the problem, with many countries requiring migrant workers to be inoculated to avoid quarantine or sometimes to enter at all.

Ajay Sodari, a migrant worker in Kathmandu, Nepal, who needs to be vaccinated before he can start his job in South Korea, said, “I spent four years studying the Korean language, to get selected as a qualified worker in language tests and sign a labor agreement with the company.” He said that he had spent thousands of dollars to meet the employment requirements but that the pandemic had “shattered my dream.”

The lack of vaccines has been most acute in Bangladesh and Nepal, both of which planned to source most of their doses from neighboring India until New Delhi stopped vaccine exports this spring to prioritize its own citizens. In Bangladesh and Nepal, only about 3 percent of the population is fully vaccinated, according to a New York Times database.