Heavy snow is forecast across the UK this week, with the start of the wintry conditions expected in just a few hours time. Weather maps show Scotland will see the start of the snowfall, before it moves further south on Wednesday, eventually covering much of Britain.

Snowfall is forecast in the north of Scotland on Monday and Tuesday as the mercury is set to plummet to -6C in these areas, according to charts by Netweather.

The rest of the country is set for slightly warmer conditions at the start of the week, with temperatures reaching the double digits.

As Wednesday approaches, the freezing temperatures in Scotland begin to move further south, alongside the high snow risk.

By 9pm a snow risk chart shows much of Scotland and northern England covered by swathes of red and white, indicating between a 75-100 percent chance of snow.

Parts of western England and much of Wales are covered by a lower snow risk, of between 30-70 percent. 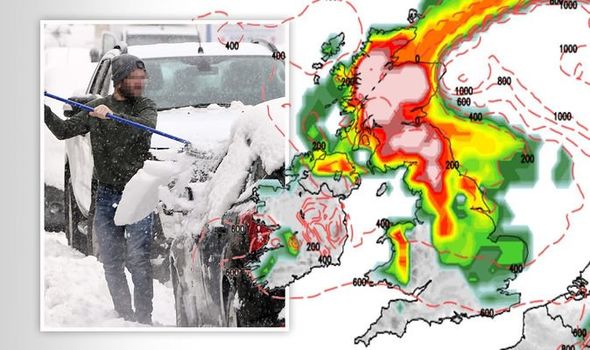 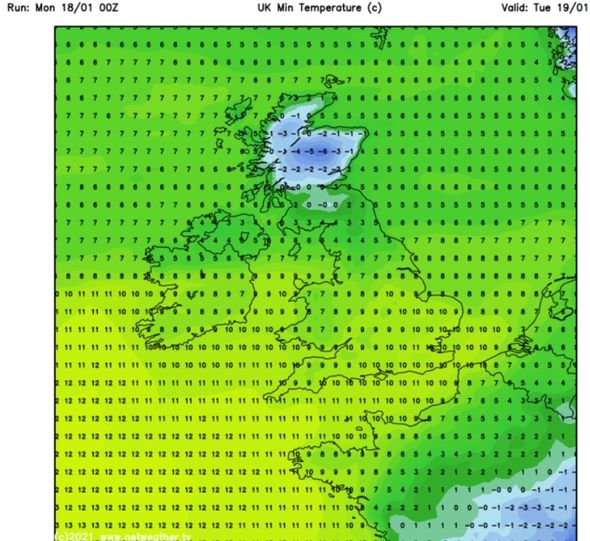 By midnight the snow risk intensifies further, with much of the UK covered by huge patches of white and red on the weather map.

The east of England and parts of the south avoid the risk of snow at this time, but the charts predict the snowstorm will move further east overnight.

A second chart, valid for 6am Thursday, shows the weather front has moved east, with parts of the Midlands and the east of England covered by a moderate snow risk, as shown by the green and yellow colourings.

Much of Scotland and the north of England are covered by a 100 percent snow risk, which is where the heavy snow is set to fall. 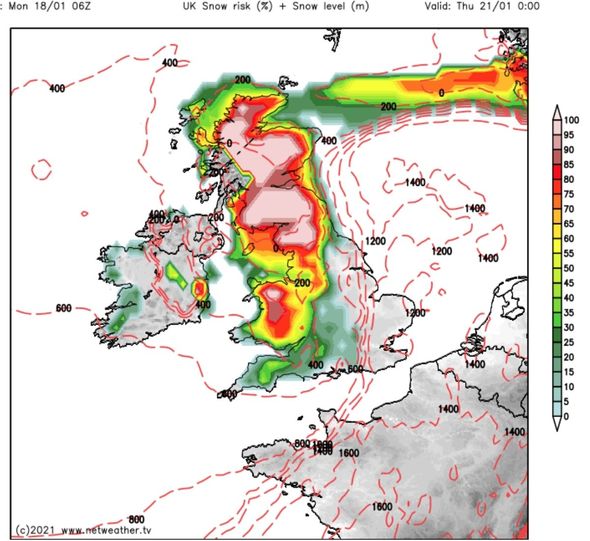 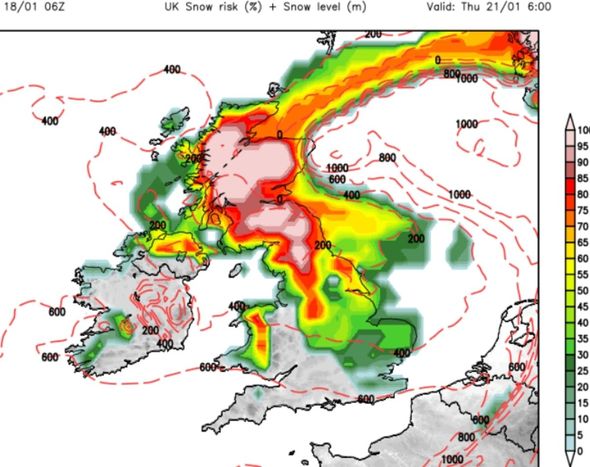 Snow depth maps by WXCharts show parts of Northern Scotland can expect up to 12inches (32cm) of snow on Monday and Tuesday.

But by Wednesday that starts to steadily increase, with 19inches (48cm) forecast at 9am on Thursday morning.

The chart shows heavy snow is also expected to blanket the rest of Scotland and north of England, with up to 10 inches (26cm) expected in Cumbria.

The map shows the snow depth continues to increase through the week, with 2.5ft (78cm) forecast at 9am on Friday January 22. 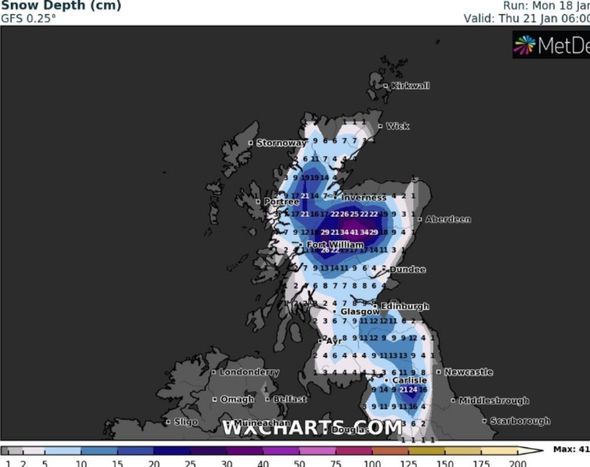 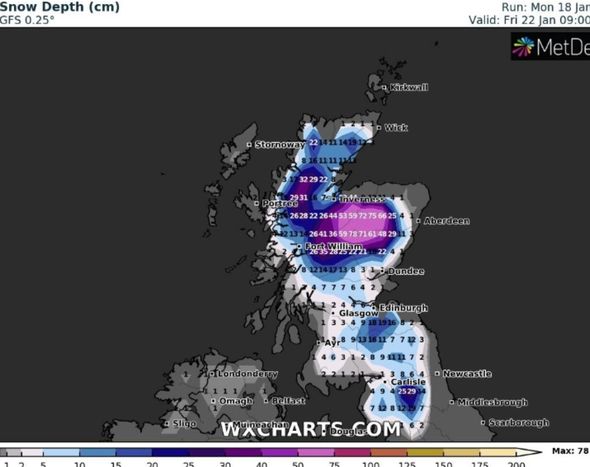 Netweather shows a high risk of snowfall continues through Thursday for Scotland, the north of England, Midlands and parts of Wales.

By Friday the snow risk chart shows the wintry conditions look set to stay confined to the very north of the UK.

The 48-hour snow blitz from Wednesday evening also looks set to drive down temperatures across the UK.

By 6am on Thursday most of Scotland and the north of England will be plunged below freezing, as the rest of the UK sees highs of 5C.

Temperatures will drop further on Friday, with -6C forecast in Scotland at 9am, while the rest of the UK battles to exceed 0C. 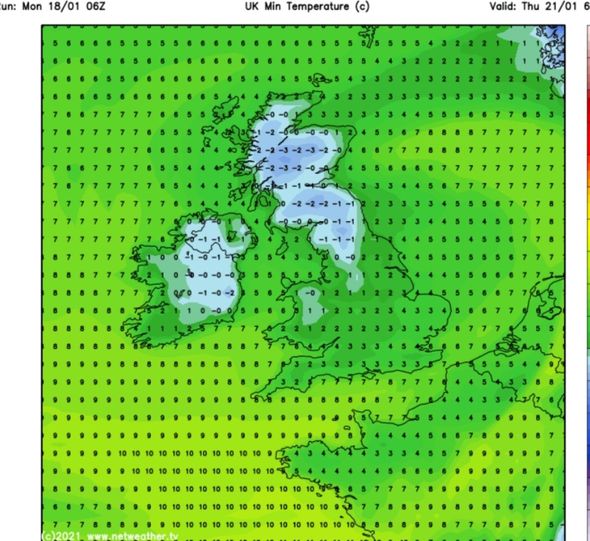 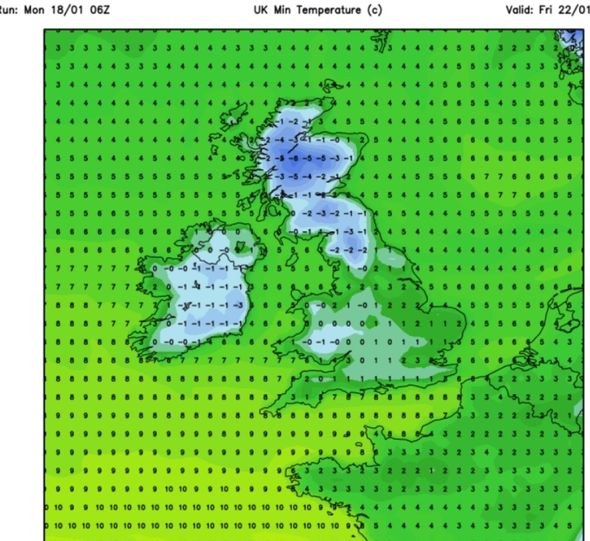 The Met Office has said snow is possible from Wednesday to Friday this week.

They said: “Remaining extremely unsettled with heavy rainfall, potential for snowfall on the northern edge. “Strong winds across southern and, more especially, central areas. Much colder in the north with wintry showers.”

Met Office meteorologist Tom Morgan “Despite the brief thaw, from Wednesday night we expect a return of colder, windy conditions, with snow falling on higher ground in the North of England and overnight frosts further south.”

BBC forecasters also expect the end of the week to be characterised by the “occasional wintry weather”.

Macron snubbed: French leader given just 10 mins to speak at EU event that was ‘his idea’