Candi CdeBacal, a Denver councilwoman, is facing calls to resign after she retweeted a meme and said she stands in “solidarity” with the idea of spreading the deadly virus at President Trump’s MAGA campaign rallies. On the morning of Super Tuesday, Ms CdeBaca retweeted a meme on her government Twitter account which read: “For the record, if I do get the coronavirus I’m attending every MAGA rally I can.”

In her re-tweet, Ms CdeBaca wrote “#Solidarity Yaaaas!!”, alongside a laughing, fist pump and ok emoji.

The tweet has since sparked fury among Mr Trump supporters who called for her to resign.

The US president’s eldest child and son Donald Trump Jr even responded, saying: “These people are sick.” 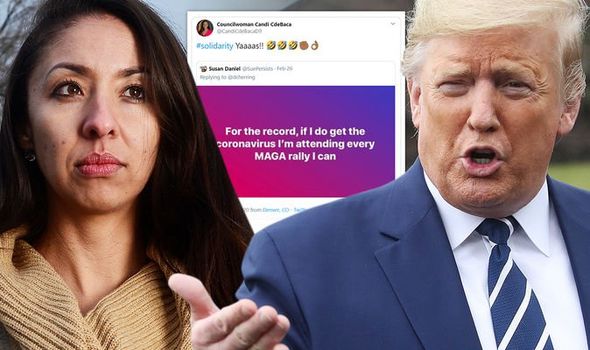 American political columnist Benny Johnson posted on Twitter: “Democrats in Colorado are calling for Trump supporters to be purposefully infected with Coronavirus.

Others called out Ms CdeBaca for her “shameful and sickening” actions.

A furious Twitter user wrote: “The true definition of politicising the coronavirus.

“This woman should be removed from her position immediately!”

Another said: “This is the FACE of the Democrat Socialist party, willing to kill innocent people so they can Rule the World.

“With their mentality the world would become extinct under their authority. Despicable people should not rule over the Righteousness and Upright. Good People take Dominion.”

One posted: “Hatred fuelled politics. Just what the world needs LESS of.”

Another added: “This is absolutely freaking disgusting – to have this much hate against fellow Americans shows no humanity, no morality and definitely no ethics!”

But Ms CdeBaca has defended her tweet, which has since been deleted, saying it was “sarcasm”.

Replying to a critic, she posted: “Are you listening to ANYTHING Trump has said about the virus?

“Do you realise Trump reduced the virus to the common flu. I know sarcasm is hard to read in a tweet.”

Her office also issued a statement, reading: “Councilwoman CdeBaca made a sarcastic tweet on Twitter to call attention to the Trump administration’s downplaying of the coronavirus as a ‘hoax,’ no more dangerous than the common flu.

“Rather than conservative outlets making a four-day-old tweet their focus on Super Tuesday, they should focus their energy on demanding a competent federal response to this public health crisis instead.

“The Councilwoman will continue to focus on her priorities in her district and not on the mostly out-of-state conservative media who have targeted her since even before her election to office.”

Seven people in the US have died from the coronavirus, with approximately 108 confirmed cases in America.

Meaning behind children in the Princess Diana statue explained