Russia has branded the attack on the Kerch bridge a “declaration of war without rules” and promised an “adequate response”. On Saturday a massive explosion on the 12 mile bridge killed three people and caused substantial damage. The bridge links Crimea with the Russian mainland and is a key supply route for the Kremlin’s southern army fighting in Kherson province.

Alexander Bashkin, a Russian Senator, vowed that the attack on the bridge would not go unanswered. He said: “This was a declaration of war without rules.” The politician added that the Kremlin’s response would be “adequate, conscious and, possibly, asymmetric”. 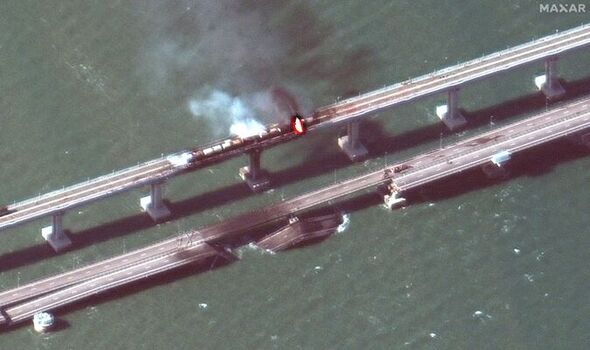 The Ukrainian military is currently involved in a “tough” fight near an important eastern town.

On Saturday night, Ukraine’s President Zelensky said in his nightly war update that Ukraine soldiers were fighting near the strategically important town of Bakhmut, which Russia was trying to capture.

The President said: “We are holding our positions in the Donbas, in particular in the Bakhmut direction, where it is very, very difficult now, very tough fighting.”

Bakhmut sits on the main road of the two cities of Sloviansk and Kramatorsk, which are both located in Donbas, a region of Ukraine that Russia is attempting to fully occupy.

Labrador puppies squash themselves into single bucket in adorable footage