A shocking video has captured cars ploughing through flooded roads in Cornwall as flash flooding begins to batter the UK. Traffic was filmed battling a river of water along main roads as heavy rain is expected to seriously impact travel routes. As the sweltering heat breaks, downpours are expected across the nation with serious warnings issued for thunderstorms by the Met Office.

Storms have swept across Cornwall as the coastal region has been one of the first areas to be hit by a wave of floods amid weather warnings.

An amber thunderstorm warning was issued by the Met Office on Monday for Cornwall and Devon with harsh weather conditions expected to continue throughout the week.

The video from Truro, a city in Cornwall, showed a roundabout engulfed in a deep pool of water as motorists struggled through the flooding.

Ruan Sims, manager of HiQ Tyre and Autocare garage based in Truro witnessed the scene and said: “It was quite mad. We have never seen it go that high.” 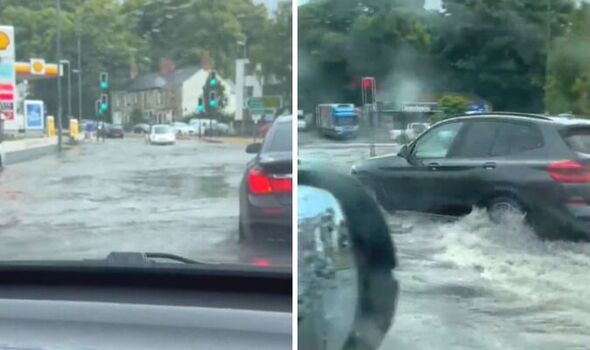 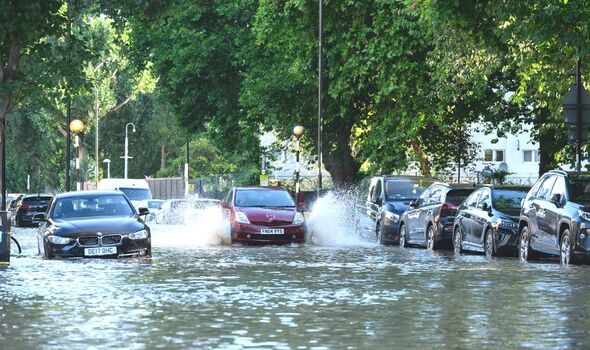 The record-breaking heatwave of high temperatures throughout July has sparked a nationwide drought with a series of water companies introducing drastic measures to prevent a shortage of supply.

South West Water, the company that serves Devon and Cornwall, introduced a hosepipe ban in the region after reservoir levels dropped dramatically in the sweltering conditions.

Water usage restrictions remain in force as the majority of the UK has been issued with yellow thunderstorm warnings.

Experts have suggested the persistent dry weather has dried out land across the UK, increasing flood risks as the rain glides over the surface of the ground rather than being absorbed. 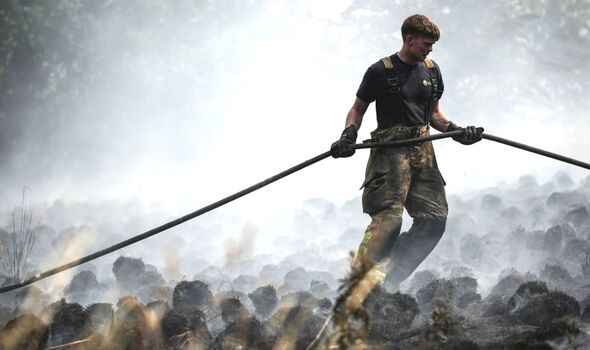 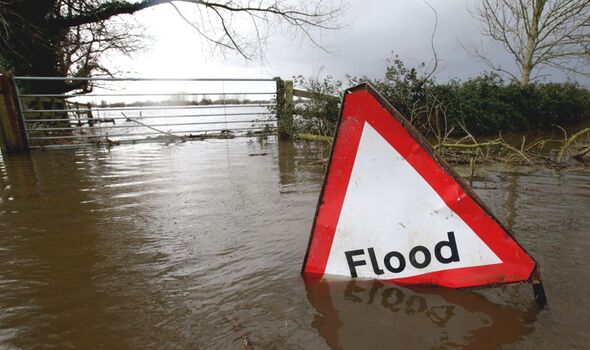 Emergency services came under strain after the scorching conditions resulted in wildfires breaking out across the nation.

As the weather patterns change, relief from the pressure may not be on the horizon with authorities now facing widespread flood risks.

The Met Office has predicted thunderstorms across much of the country over a four day period, with the heavy rain anticipated to cause further concerns for emergency services.

The population has been warned of sudden flooding with the added threats of widespread power cuts. 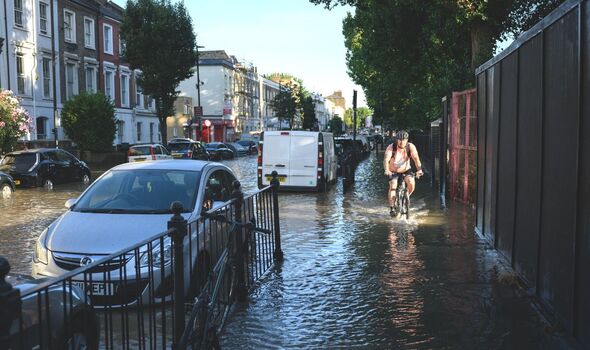 Met Office forecaster Dan Stroud said: “It’s very difficult for water to actually get in because it has to force the air out of the soil.

“So, the dry ground gets very quickly overwhelmed and we then get surface run-off.”

The Met Office said: “Flooding of homes and businesses could happen quickly, with damage to some buildings from floodwater, lightning strikes, hail or strong winds.”

The warning added: “Spray and sudden flooding could lead to difficult driving conditions and some road closures.”

Read next:
UK braces for flash floods as rain lashes down on sun-baked soil
‘The start of it!’ Warning of more extreme weather after UK heatwave
UK rain latest: Hail and lightning forecast but what time will it hit
‘Too much rain?!’ Sally Nugent slapped down after ‘silly’ question
UK storm: ‘Danger to life’ as Brits to be lashed by 3 days of rain