Voters in the southern Pacific French territory of New Caledonia are set to cast their ballots in a referendum on whether to break away from France and become an independent state.

The poll on Sunday is the second time New Caledonia holds such a referendum. Two years ago, almost 57 percent of voters voted against independence. If statehood is rejected again, a third referendum may be possible in 2022.

Choosing independence would lead to full devolution of powers to the territory of 273,000 people, and the end of generous subsidies from France, which provides $1.5bn in financial support annually.

More than 180,000 people are registered to vote in the poll, in which they will be asked the question: “Do you want New Caledonia to gain its full sovereignty and become independent?”

The United Nations and the regional Pacific Island Forum are observing the vote in the archipelago, which is located 1,200km (750 miles) east of Australia and 1,350km (840 miles) west of Fiji.

Campaigning was fierce in the lead up to the referendum given the slim margin seen in the 2018 poll. At the time, the No-camp won by 18,000 votes, a much narrower margin than expected.

“We have seen a lot of gatherings, meetings, and this year a show of colours: blue, white and red for the [Loyalists] and red, yellow and green for the Independents, much more than two years ago,” said Catherine Ris, Professor of Economics at the University of New Caledonia in the territory’s capital, Noumea. 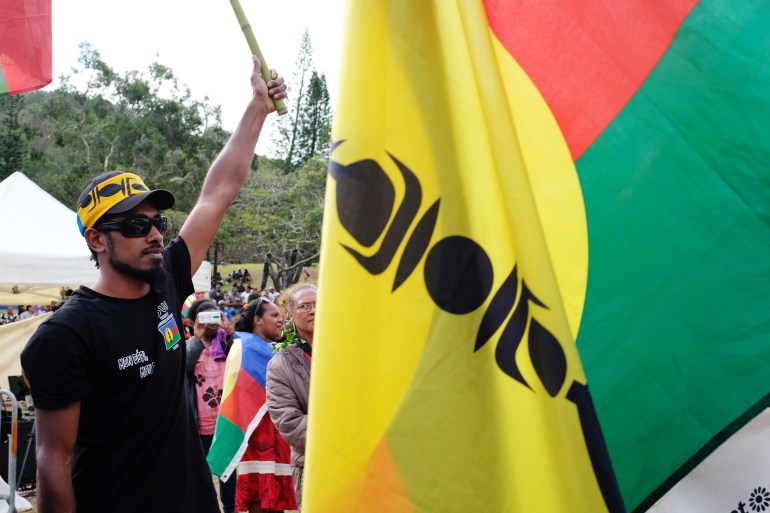 A pro-independence supporter during an October 1 rally in Noumea [Theo Rouby/AFP]“On the side of the political leaders, we observe more aggressive positions and speeches,” she told Al Jazeera, adding that politicians have stepped up efforts to mobilise younger and Indigenous voters living in the outer islands who may not have cast their ballots in the last referendum.

An additional 6,000 people are eligible to vote this time around.

“Because the result [in 2018] was much closer than in the polls, this time everyone will vote,” said Ris, predicting a much higher turnout rate than the 81 percent seen two years ago.

Both sides of the political divide have forged broader coalitions in order to strengthen their influence this year. “Les Loyalistes” or the Loyalists consist of half a dozen staunch anti-independence parties, while the two separatist parties, including the Labour Party, have formed the Mouvement Nationaliste pour la Souverainete de Kanaky or the Nationalist Movement for Sovereignty of Kanaky.

New Caledonia was colonised by France in the mid-19th century and won greater autonomy and the right to hold up to three referendums on its political status under the Noumea Accord, signed between French and local leaders in 1998.

The agreement followed from a 1988 peace deal that ended decades of conflict between the Indigenous Kanak people and the descendants of European settlers known as the |Caldoches”. Despite the Noumea Accord’s promise of a “common destiny” for all citizens, Kanaks, who comprise about 39 percent of the population, still experience higher levels of unemployment and poverty, as well as lower achievement in higher education.

In the 2018 referendum, the vast majority of those who voted for independence were Kanak, while those who supported continuing ties with France were either of European descent or from other non-Indigenous minority groups.

For the pro-independence campaigners, full sovereignty is about decolonisation, emancipation, reducing inequality and their right to decide the future of the islands, including realigning their political and cultural allegiances to the wider community of Pacific Islands states.

The Loyalists, however, say they are proud of their French heritage and say their high standards of living, as well as good public services on the archipelago, are in large part due to French subsidies.

French President Emmanuel Macron has meanwhile emphasised the role the European power can play in countering the growing geopolitical and economic influence of China in the Pacific region.

Romney to support subpoena in Senate probe of Hunter Biden

People Fear a Market Crash More Than They Have in Years