Outrage as health workers spray migrant workers with disinfectant, amid fears that their exodus is spreading the virus. 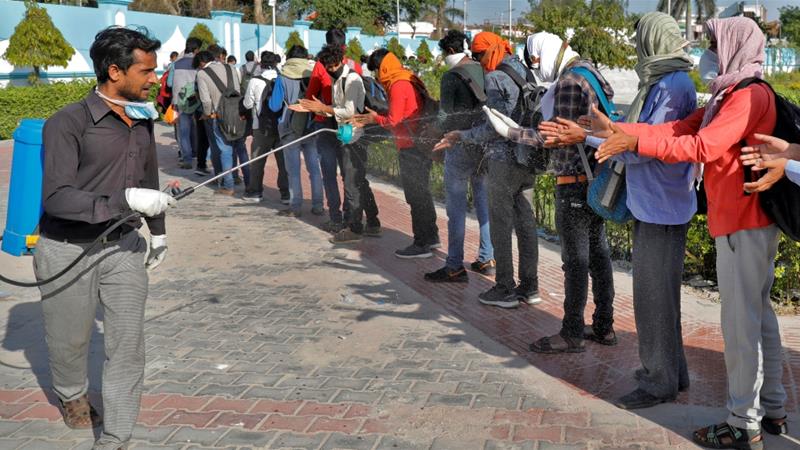 Indian health workers have caused outrage by spraying a group of migrants with disinfectant, amid fears that a large-scale movement of people from cities to the countryside risked spreading the coronavirus.

Footage showed a group of migrant workers sitting on a street in Bareilly, a district in the northern state of Uttar Pradesh, as health officials in protective suits used hosepipes to douse them in disinfectant, prompting anger on social media on Monday.

Nitish Kumar, the top government official in the district, said health workers had been ordered to disinfect buses being used by the local authorities but in their zeal had also turned their hoses on migrant workers.

“I have asked for action to be taken against those responsible for this,” he said in a tweet.

A number of opposition leaders, including former Uttar Pradesh chief ministers – Mayawati and Akhilesh Yadav – attacked the ruling Bharatiya Janata Party (BJP) government in the state for its “cruel and inhuman” treatment of the poor.

“The workers have already suffered a lot. Please don’t wash them with chemicals now. This will not protect them and instead endanger their health,” tweeted Congress leader Priyanka Gandhi Vadra.

Others on Twitter asked if the same treatment was given to hundreds of Indians evacuated from China and other coronavirus-hit countries by the government.

India imposed a nationwide lockdown – the world’s largest – on March 25, with thousands of labourers subsequently fleeing cities for their home villages after work – and public transport – vanished.

India, home to 1.3 billion people, has registered nearly 1,100 cases of the new coronavirus, of whom 29 have died, the Health Ministry said on Monday.

Many experts doubt the numbers and say that India is testing far too few people. Officials say the country is weeks away from a surge in cases that could overwhelm its weak public health system.

Turned away, locked up

Meanwhile, many workers left jobless by the crippling 21-day lockdown are being turned away by fellow villagers seeking to stem the outbreak, while others have been forced into a lockdown against their will.

Local media on Sunday reported 22 migrant workers’ deaths, including in road accidents, but this could not be officially confirmed.

The exodus has raised worries that those returning may spread coronavirus into rural areas, particularly with authorities resorting to cramming people onto buses and into relief camps and homeless shelters.

Footage posted on social media showed workers locked up in the eastern state of Bihar, weeping and begging to be freed, provoking outrage over the government’s handling of the crisis.

In West Bengal state’s Purulia district, seven migrant workers seeking to return home were refused entry to their villages. Some were forced to take temporary shelter in trees.

“Since the workers didn’t have personal rooms at homes, the villagers decided that they should be isolated. But owing to fears of attacks by wild elephants they built temporary tree homes by attaching cots to branches,” local official Dhrubapada Shandilya said by phone.

“They were living in the trees for about five days when we came to know about it. We moved all of them to a health centre on the weekend,” he added.

Villagers across India have reportedly erected barricades, dumped trees or dug trenches to stop outsiders from entering as groups of young people guarded entry points to their hamlets.

In Bihar and Uttar Pradesh, some returning migrant workers were reported to police by local residents with the aim of having them undergo medical testing.

“Four of my co-villagers working in Nepal returned home two days ago. But villagers informed police about them following which they swooped on the village with ambulances and handed them over to the medical team,” Abhishek Singh, a resident of a village near Patna told India’s PTI news agency.

Late on Sunday, several hundred labourers clashed with police in Surat, in Prime Minister Narendra Modi’s home state of Gujarat, after they were prevented from leaving, authorities said.

“Around 30 tear gas shells were fired to disperse the crowd that had damaged several police vehicles. Over 90 people have been arrested,” said deputy police commissioner Vidhi Chaudhary.

State authorities also laid on buses to take people home, but also asked them to stay put, saying they would be provided with food and shelter.

But on Monday, thousands of men, women and children still thronged Gujarat’s roads.

“The contractors who brought us here for work refused to help us,” said Ramprasad Kevat who walked almost 30 kilometres (20 miles) from Ahmedabad and wanted to get back to Jhansi in Madhya Pradesh state.

Have your say: Brits should have the day off during extreme heat

Dinosaur remains ‘likely to be found on the moon’, scientists claim