The Met Office has thrown its weight behind multiple weather models and forecasters pointing at next week marking the first significant UK-wide drop in temperatures of the season. Maps show a polar ice blast covering much of the country by next Tuesday, September 27, just days after autumn will be officially declared this Friday. Lows of 3C will be experienced in the far north, with thermometers struggling to get above freezing in parts of the Scottish Highlands. Many forecasting tools have indicated that next week is one to watch, and now the Met Office has shared its verdict.

Stephen Dixon, a Met Office spokesman, detailed the way in which the weather will slowly deteriorate from this weekend and into early next week.

He told Express.co.uk: “Early next week, temperatures as low as 3C are most likely in the far north and in the early hours of the morning.

“During the day, temperatures next week are likely to be cooler than average for most, although it’s not possible to put specific figures on it due to the uncertainty of forecasting at that range.

“The set-up for next week looks to be unsettled in nature, with a mix of wind a rain likely for most at points through next week.” 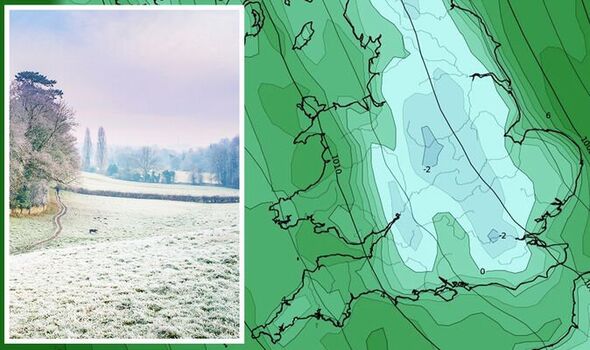 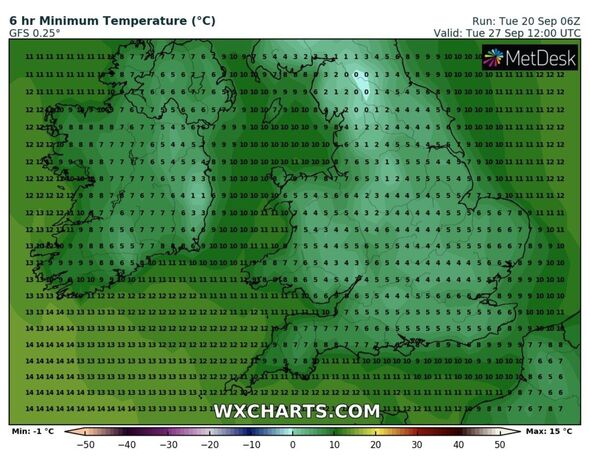 Rewinding back to the tail end of this week, Mr Dixon added that many places will see heavy rain before the weekend – something Jim Dale from British Weather Services said would be responsible in the demise in temperatures during the last week of September.

He added: “Before then, this week rain will move in from the northwest from this Thursday, gradually sinking south on Thursday and Friday.

“The highest totals are expected to be in the northwest, with totals of around 40mm of rain possible by the end of the day on Friday.

“There’s a chance that some heavy rain will still be embedded within this system as it moves south on Friday, but as yet there’s little clarity on the extent and exact positioning of these features.” 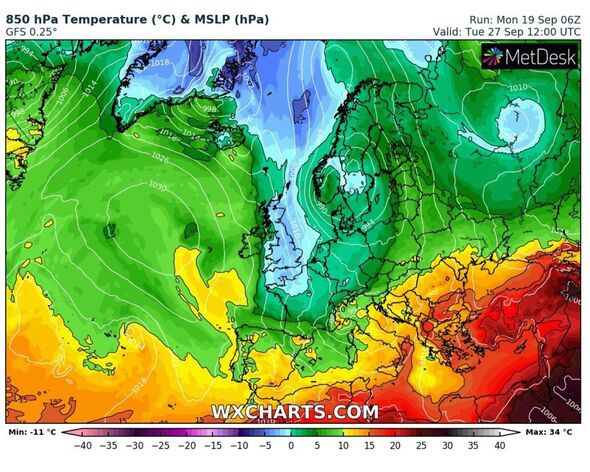 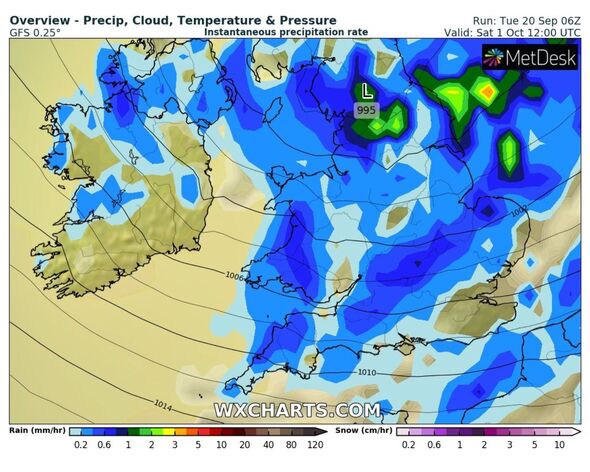 He labelled it an “unsettled weekend for most”, and continued: “Showers will be possible for some on Saturday, before winds could pick up in the north on Sunday, bringing with it some further rain for northern areas.”

Brian Gaze, founder of The Weather Outlook, forecast similar findings for the week ahead in his own blog.

He said: “During Thursday outbreaks of rain push southeastwards. There is still uncertainty about their rate of progression, but by the evening they will probably be pushing down across northern England and northern Wales.

“To their north it turns brighter and cooler. To their south a lot of cloud is expected, although a few sunny spells are possible.”

DON’T MISS:
Queen’s funeral to be blanketed in cloud ahead of ‘odd showers’ [REPORT]
Monty Don shares how to sow winter spinach in September [REVEAL]
Exact date to turn on your heating to avoid ‘unnecessary’ problems [INSIGHT]

“Through Friday spells of rain become slow moving over the southern half of Britain and there could be some heavy bursts mixed in. Northern England, Scotland and Northern Ireland have sunny spells and showers. Cool in the wet areas.”

But he didn’t deliver such a harsh blow about this weekend’s weather, and added: “The weekend is looking mixed. Saturday could see wet weather continuing in central and eastern England. In other areas, it should be mainly dry and bright. After a dry start on Sunday, it may turn wet and windy in the north.”

Long-range forecast maps show the colder spell may be over by next Thursday, September 29 – but by the first weekend of October, a large band of rain covers the country.

At this early stage, it’s not yet clear how heavy and prolonged the showers will be.