Met Office yellow weather warnings have been issued today for over the next few days with fierce winds due to hit the whole of England and Wales. Warning maps span the entirety of both countries, with up to 70mph winds forecast on Wednesday and Thursday.

The Met Office warns: Strong and gusty winds are likely to develop on Wednesday evening and continue into Thursday across England and Wales.

“Gusts of 50-55 mph are possible inland, especially close to showers.

“Gusts may reach 60-70 mph on coasts and hills, especially in the west, before gradually easing on Thursday afternoon.”

This comes after the mercury sank to -7.7C in Sennybridge on Sunday, and yet more cold temperatures are forecast. 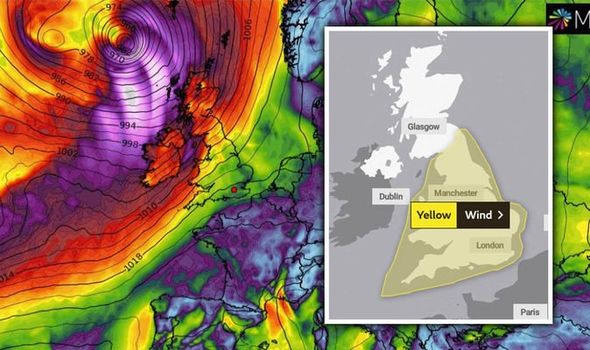 The Met Office wrote on Twitter: “Sunday saw a north to south split in the #weather across the UK. #Frost cleared to give some #sunshine in the south, whilst cloudier skies brought some #rain in the north.”

The yellow warning for wind comes into force at 9pm on Wednesday and remains in place until 3pm on Thursday.

Netweather forecasters say the wild winds are due to two low-pressure systems heading to the UK from the Atlantic. 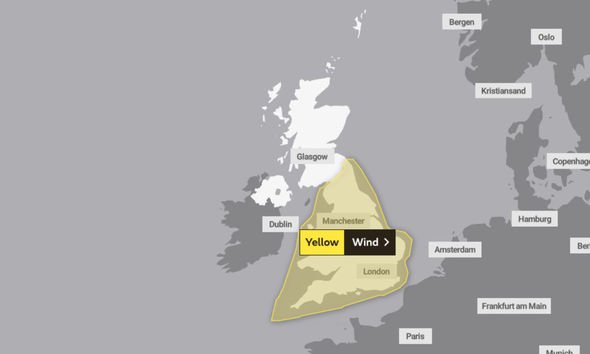 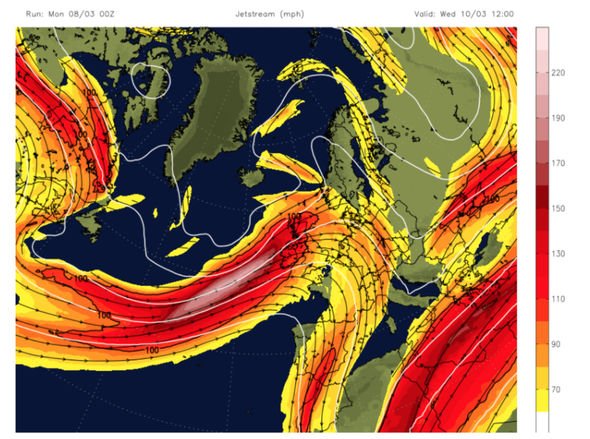 These systems will “bring wet and very windy weather from the west.”

The forecasters warn conditions could turn “stormy” to the middle of this week, due to “the strengthening Jetstream” which will “throw two rapidly deepening lows our way”.

Despite the map covering the entirety of the UK the worst of the winds will be seen in “Wales and SW England” as well as “through the Irish Sea and the English Channel.”

Following the gales there will be squally showers in colder air and with a fresh to strong westerly wind persisting on Thursday, it will feel cold.

Netweather warns there is yet more snow on the way, with showers taking on “a more wintry tinge through the day with snow later Thursday into the weekend for hills and mountains of Northern Ireland, northern Britain and Wales.”

Maps from WXCharts – which gets its data from Met Desk – show strong winds across much of England and Wales on Wednesday night.

The charts turn purple with the force of the winds, indicating the 70mph gusts the Met Office have predicted.

This is a breaking story, refresh for updates

Egypt shortens night curfew by an hour for Ramadan