The forecaster’s Fire Severity Index (FSI) assesses fire risks up and down the country in accordance with the forecasts for individual areas. This week scientists have said the mercury will shoot up to around 36C inland, with high pressure building from the start of this week. And now many parts of the south, southeast and central England will also see the index pushed up to exceptional, the highest possible level. This means if wildfires are to break out in these particular areas, they are likely to be severe.

Interactive maps show today the fire risk is high, largely due to the fact there is barely any rainfall predicted and temperatures are peaking at around the mid to late 20s for large parts of England.

But fast-forward to Thursday, August 11, and parts of the south coast, including Kent, Sussex and Hampshire begin to illuminate red – which indicates an exceptional risk.

This only spreads as time goes on, with the entire south-east covered by Friday, August 12, and stretching to the midlands by Saturday.

On Sunday, August 14 this is scaled back with large parts of the east still under the highest level, but the majority of the south coast will return to level 4, which is dubbed “very high” by the Met Office. 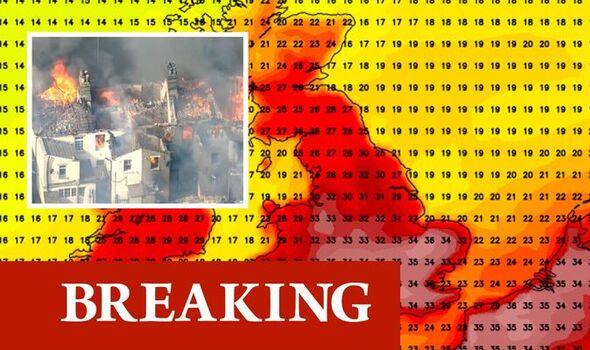 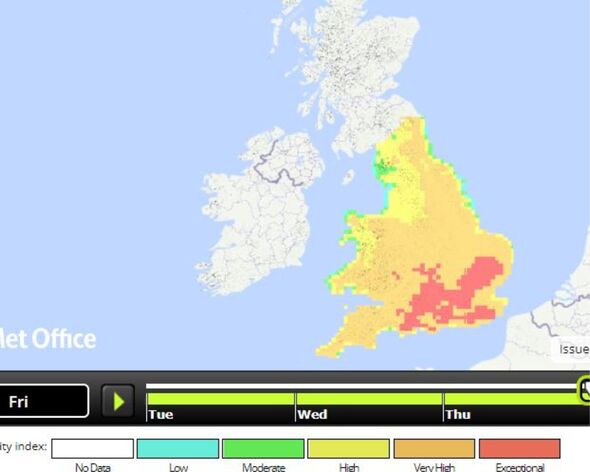 Climate scientist for the Met Office, Professor Richard Betts, took to Twitter to explain with a stark warning.

He said: “With UK temperatures rising and very little rain, the landscape will dry out more, further increasing risks of wildfire.

“The Fire Severity Index is already Very High across wide areas By Friday, exceptional in many places, please be careful not to start fires.”

The last time the index was pushed up to its highest point was during July 19’s exceptional heat. 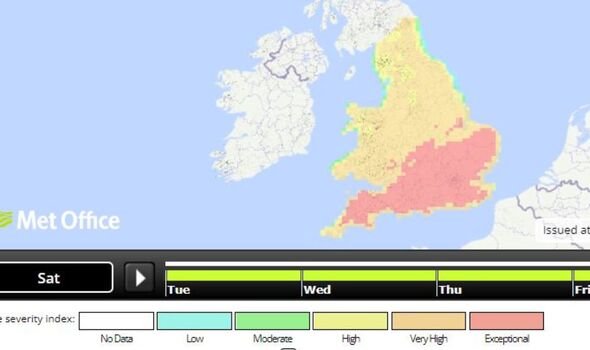 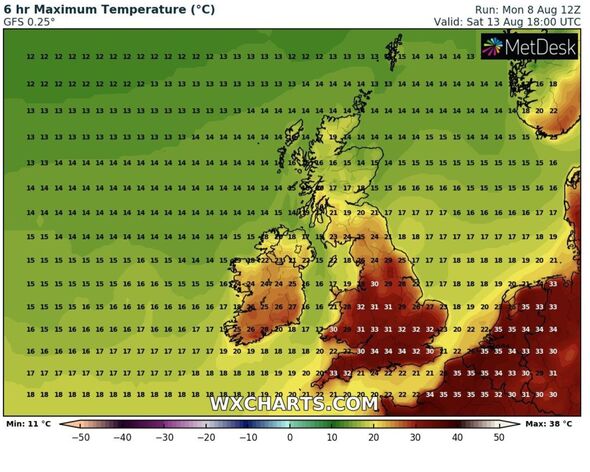 The last time much of the south was blanketed in such an alert multiple fire services sought to warn their communities.

They also included a list of tips of what to do in the event of an emergency.

West Sussex Fire and Rescue Service advised people to avoid open fires in the countryside, put cigarettes out properly, take rubbish home and call 999 if a fire breaks out.

Surrey Fire and Rescue also advised people against the use of barbecues, with retailers M&S, Co-op and Aldi taking disposables off the shelves to elimate fire risks.

Temperatures are set to tumble by Sunday, August 14 but the FSI is still showing some areas will still be at a severe risk if a blaze was to break out. The Met Office has also issued an amber heat health warning for the nation in place until this Friday.

The alert says: “The biggest uncertainty is over the end of the hot spell, with thundery showers expected to arrive from the south through the weekend introducing cloudier, somewhat cooler conditions.

“Confidence in the details of these showers remains low however with potentially for a continuation of warm or very warm temperatures into next week for some areas before we see a gradual return to around average.”

By next week forecasts show thermometers will return to late 20 degree temperatures with a risk of thunderstorms on the horizon.