Hundreds of Chinese citizens in the southern city of Shenzhen have protested against a coronavirus lockdown imposed by the authorities. A video from the city in southern Guangdong province showed furious locals confronting police officers wearing blue medical protective gear, including gowns, face masks and plastic visors.

Protesters in the crowd chanted “lift the lockdown” while clashing verbally and physically with police who attempted to maintain them with metal barriers.

Some people in the crowd were seen throwing water bottles at the cops who made a number of arrests.

In one clip, a woman can be heard shouting “police are hitting people”, it has been reported.

Officers also held up a banner that read “Please co-operate as police are enforcing the law”. 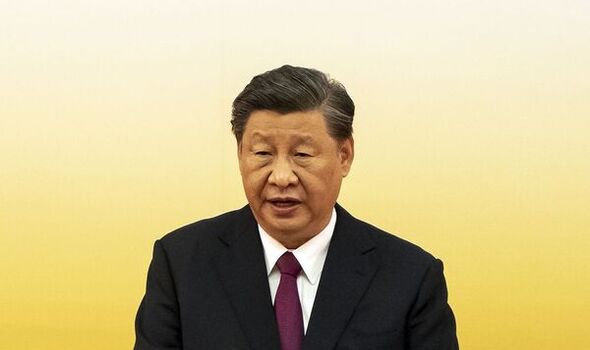 The protests took place after local health officials imposed what they referred to as “control measures” in the waterfront district of Shawei on Monday.

They argued that there were abnormalities in the mass Covid tests that have been a regular feature of Chinese life since the start of the covid 19 pandemic.

Similar but smaller protests also took place in the Xinzhou and Huaqiangbei districts of the city.

The “control measures” include banning anyone from leaving the district of Shawei.

Those in high risk areas where infections were reported were also ordered to stay home.

Meanwhile the commuter railway station in Shawei was also closed “as part of pandemic prevention and control”.

While the majority of other countries have relaxed Covid measures following large scale vaccination campaigns China continues to implement its dynamic zero covid policy to battle the virus.

This approach attempts to stamp out every Covid case using mass testing , lockdowns, quarantines and other restrictions.

Millions of Chinese citizens are required to take regular Covid tests with the possibility of quarantines and sudden lockdowns if anyone tests positive.

These restrictions have become more common following the arrival of the more contagious Omicron variant.

Although the measures appeared to be popular in the early stages of the pandemic, public patience with them appears to be wearing thin.

In Shenzhen, the measures were introduced following the discovery of 78 active Covid cases in the city of 18 million people.

During the forthcoming week-long national day holiday, Beijing residents are being discouraged from leaving the city.

Those travelling to the Chinese capital must show a negative PCR test results within 48 hours and then take two additional tests within three days upon arrival.