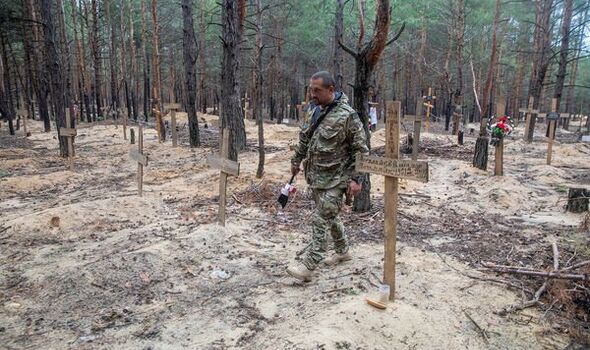 Authorities in the north-eastern city, recently freed from Russian occupation, said hundreds of bodies had been found.

Regional police head Volodymyr Tymoshko reported more than 400 Ukrainian corpses were thought to have been buried there.

Alluding to a growing number of such mass graves being uncovered in the wake of the ongoing Russian retreat, a disgusted President Zelensky said: “Russia leaves death everywhere.”

Similar grim discoveries were made earlier in the war in Bucha, near the capital Kyiv, and also near Mariupol, the key south-eastern Ukrainian port occupied by Russian troops.

Investigators in Izyum were last night trying to determine what happened to the victims. But initial accounts have suggested many may have died from bombing and a lack of access to healthcare.

There are also signs that some of the graves could belong to Ukrainian soldiers.

Mr Tymoshko said exhumations were starting in a bid to get a clearer picture of the number of victims in the city, which was under Russian occupation for more than five months.

But in a televised address to his nation, President Zelensky said: “We want the world to know what is really happening and what the Russian occupation has led to. Bucha, Mariupol, now, unfortunately, Izyum.”

Andriy Yermak, the head of President Zelensky’s office, tweeted a photo of the alleged mass grave, saying that more information was expected over the weekend.

In an accompanying caption, he wrote: “A mass burial was found in Izyum, Kharkiv region. Necessary procedures have already begun. All bodies will be exhumed and sent for forensic examination.”

Much of Izyum, visited by President Zelensky earlier this week, now lies in ruins after the Russian army beat a hasty retreat in the face of an ongoing Ukrainian counteroffensive.

One local politician told reporters that up to 80 per cent of the town’s infrastructure has been destroyed, and that bodies are still being discovered in the rubble.

Izyum and a number of other cities in the Kharkiv region were liberated earlier this month during a swift Ukrainian counter-attack.

The offensive appeared to have surprised Russian troops and left them unprepared to defend their ­positions. Ukraine claims it has identified more than 21,000 possible war crimes.

These include the killing of civilians and rape – all committed by Russian troops since Vladimir Putin ordered a full-scale invasion in February.

The US and more than 40 other countries, including the UK, have agreed to help coordinate the investigations into suspected war crimes in Ukraine.

The nations have signed a political declaration to work together.

Edin Whitehead: My story, as told to Elisabeth Easther

‘Don’t ignore this!’ Britons warned Tier 4 lockdown to be extended out of London next week