You could have heard a pin drop in Rome’s fan zone as that last penalty was taken.

Italy’s goalkeeper saved it and not only did the hundreds staring at the big screen go wild but so did the rest of the Italian capital and the country.

People were simply ecstatic, celebrating a win they had hoped for but after England scored in the opening minutes, some began to doubt. 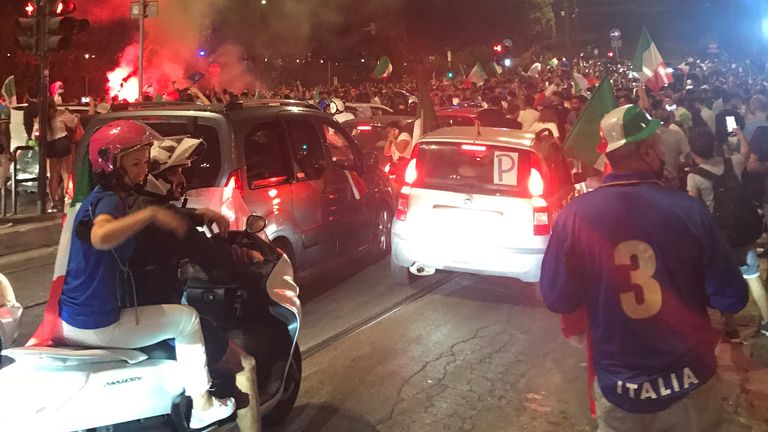 The singing started and a refrain we’ve heard since we arrived in Rome rang out. “Football’s coming Rome” – the Italian fans adopting but adapting what has long been an England football anthem.

A man wearing a wig in the style of Italy’s Tricolore flag told us: “This is the best day of my life.”

Another fan told us, “It’s absolutely amazing, amazing. We are the champions.”

Close by, a man simply stood and cried with relief and joy.

As we filtered out onto the streets it was mayhem. Literally. Thousands had turned out to celebrate. Cars clogged the roads, drivers beeping their horns, flags being waved, fireworks being let off.

A man in a rather elaborate frock formed of the Italian colours stood on the roof of one vehicle as it moved through the streets, his friends leaning precariously out the windows and holding his ankles. He popped a champagne bottle, took a swig and then sprayed the crowd. And they loved it.

This is a victory people here believe is long overdue. It may have taken more than 50 years of waiting but Italy are European Champions once again

And if the scenes post-match in Rome are anything to go by, you just wonder what the team’s return and victory parade promise.

A newspaper's strategies to stay profitable

Airbnb streamlines fees as it tilts toward biggest hosts