The measure includes $47 billion to help communities prepare for the new age of extreme fires, floods, storms and droughts that scientists say are worsened by human-caused climate change. 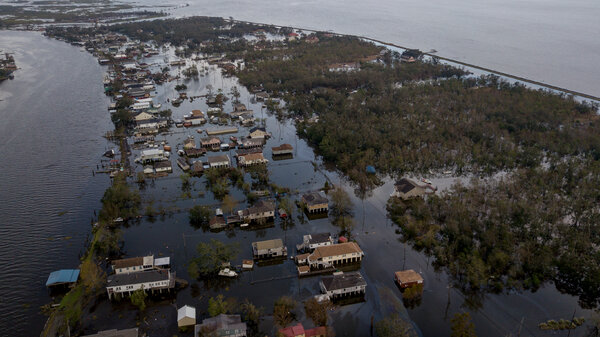 By Coral Davenport and Christopher Flavelle

WASHINGTON — The $1 trillion infrastructure bill now headed to President Biden’s desk includes the largest amount of money ever spent by the United States to prepare the nation to withstand the devastating impacts of climate change.

The $47 billion in the bill designated for “climate resilience” is intended to help communities prepare for the new age of extreme fires, floods, storms and droughts that scientists say are worsened by human-caused climate change.

The money is the most explicit signal yet from the federal government that the economic damages of a warming planet have already arrived. Its approval by Congress with bipartisan support reflects an implicit acknowledgment of that fact by at least some Republicans, even though many of the party’s leaders still question or deny the established science of human-caused climate change.

“It’s a big deal, and we’ll build up our resilience for the next storm, drought, wildfires and hurricanes that indicate a blinking code red for America and the world,” Mr. Biden said in a speech in late October.

But still in limbo on Capitol Hill is a second, far larger spending bill that is packed with $555 trillion intended to try to mitigate climate change, by reducing the carbon dioxide pollution that is trapping heat and driving up global temperatures.

House Democratic leaders on Friday came to the cusp of bringing that bill to the floor for a vote, but ultimately had to scrap the plans because they did not have enough support in their own caucus to pass it. They hope to attempt a vote before Thanksgiving.

“There’s a lot of good stuff in the infrastructure bill to help us prepare for climate upheaval, but that package does very little to affect emissions, and therefore won’t prevent climate upheaval,” said Senator Sheldon Whitehouse, Democrat of Rhode Island, one of the most prominent champions of climate action in Congress.

“It’s significant that we could get a significant bipartisan measure that recognized that climate change was real and we need to protect our infrastructure against its impacts,” said Mr. Whitehouse. “But it’s not enough to just do repair work. We need to prevent the worse scenarios.”

The spending falls far short of the levels of government action that scientific reports have concluded is needed to either prevent or prepare for the worst impacts of climate change.

While the infrastructure bill would spend $47 billion to prepare the nation for worsening floods, fires and storms, in 2018, the federal government’s National Climate Assessment estimated that adapting to climate change could ultimately cost “tens to hundreds of billions of dollars per year.”

Still, experts and lawmakers call the level of spending for “climate resilience” in the infrastructure bill historic, particularly after four years in which former President Donald J. Trump denied the established science of climate change, decimated environmental regulations and withdrew the United States from the Paris climate accord.

“This greatly exceeds anything we were able to get under the Obama administration,” said Alice Hill, who oversaw planning for climate risks on the National Security Council while Mr. Obama was president. “We’ve made enormous progress.”

The climate resilience spending in the infrastructure bill is remarkable for something rarely achieved in congressional debates over climate policy: bipartisan support.

A handful of Republicans who voted for the infrastructure bill were heavily involved in crafting the climate resilience provisions, spurred on by a recognition that global warming is already harming their constituents.

Senator Bill Cassidy, Republican of Louisiana, who helped write the climate resilience provisions, will see new money flow to his state with passage of the bill. In September, Hurricane Ida left at least 82 people dead and millions without power in Louisiana, in the wake of a storm that scientists say offered a clear picture of the types of devastation that climate change will continue to wreak.

Mr. Cassidy called the bill “the largest investment in infrastructure and coastal resiliency in the history of Louisiana.”

“There’s people living in Lexington Parish, for example, flooded in 2016, whose lives — everything in their life was destroyed,” he said. “The pictures of their children, the wedding dress in which they married, the home in which they lived, which had never flooded before — the fact that we are helping our fellow Americans avoid that gives me an incredible sense of satisfaction.”

Billions of dollars in federal funds will begin flowing to other communities around the country that have been or expect to be hit by the extreme weather events that scientists say are growing more frequent and more destructive by climate change.

Those climate impacts are already being felt in every corner of the United States.

There were 22 climate disasters that cost at least $1 billion each in the United States in 2020, shattering the previous record of 16 events, which occurred in 2017 and 2011, according to the National Oceanic and Atmospheric Administration.

That record is on track to be broken again this year. This summer, the hottest on record in the nation, saw record wildfires devastate large swaths of California and a deadly heat wave bake the Pacific Northwest. Once-in-200-year flash floods killed dozens of people in New York and New Jersey.

“It’s rare that you ever have the financial resources — any financial resources — for resilience,” said Al Leonard, the town planner for Fair Bluff, a small town in eastern North Carolina struggling to recover from repeated floods. “When there’s some federal money or state money that becomes available, it really is manna from heaven.”

The measure will provide an injection of money for existing programs designed to help address the effects of climate change.

For example, the Army Corps of Engineers is to receive an additional $11.6 billion in construction funds for projects like flood control and river dredging. That’s more than four times the amount Congress gave the Corps last year for construction.

The Federal Emergency Management Agency has its own program to reduce the damage from flooding, by buying or elevating homes at risk from floods. That program will see its annual budget more than triple, to $700 million, along with new funding for similar programs.

One community in particular that might be eligible for such flood prevention funding: Three Forks, Montana, which sits at the confluence of the Jefferson, Gallatin and Madison Rivers, and is at significant risk of flooding, according to new FEMA floodplain maps.

Earlier this year, the city’s staff and mayor designed a plan to prevent such flooding, by directing floodwaters into a dry river channel. The town applied for federal funds but failed to receive them, said Patricia Hernandez, the director of Headwaters Economics, a nonpartisan Montana-based research organization that studies the financial impacts of climate change.

“Now, with this bill, they are likely to get that money,” Ms. Hernandez said. “And their flood risk reduction project will also help the region’s housing affordability and economy.”

The Bureau of Reclamation, which manages water supplies in the West, now gets $20 million a year from Congress for desalination projects, which remove minerals and salts from seawater to create fresh water, and another $65 million for water recycling. With passage of the legislation those numbers will skyrocket: The bill includes $250 million for desalination over five years, and $1 billion for water recycling and reuse, the process of treating waste water to make it available for new uses such as irrigation.

Other funding is slated toward new approaches. The National Oceanic and Atmospheric Administration will receive $492 million to map and forecast inland and coastal flooding, including “next-generation water modeling activities.” NOAA would also get $50 million to predict, model and forecast wildfires.

The Department of Agriculture is on track to receive $500 million for what it calls “wildfire defense grants to at-risk communities” — money that could help people make changes to their homes or landscape, for example, to make them less vulnerable to fires.

The bill also provides $216 million to the Bureau of Indian Affairs for climate resilience and adaptation for tribal nations, which have been disproportionately hurt by climate change. More than half of that money, $130 million, is to go toward “community relocation” — moving groups of Indigenous Americans away from vulnerable areas.

Also under the plan, the Department of Transportation will send states money to move highways out of flood-prone areas and the Environmental Protection Agency will pay for communities to relocate drinking water infrastructure at risk from flooding or other extreme weather.

Climate experts caution that all that spending should just be seen as a down payment; absent billions of dollars of additional money and aggressive action to sharply reduce carbon dioxide emissions, the costs of adapting to the new realities of global warming will only climb in the coming years.

“If you compare the total to some of the largest resilient infrastructure projects being planned in the U.S., it’s tiny,” Ms. Vajjhala said. “This is progress, not perfection.”