Leading scholar and author, accused of having Maoist links and conspiring against government, surrenders in Mumbai. 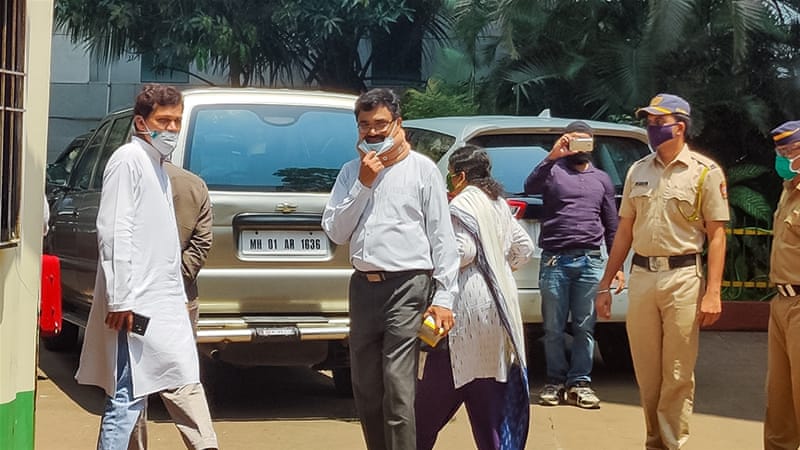 Mumbai, India – A group of photographers rushed towards an entourage of five vehicles that emerged on the eerily deserted streets of south Mumbai in India’s Maharashtra state.

Prominent intellectual and author Anand Teltumbde, wearing a mask to protect himself from coronavirus, disembarked from the vehicle to surrender to the National Investigation Agency (NIA) on Tuesday.

Teltumbde, who would turn 70 in July, is accused of having links with the extreme-left Maoist rebels and conspiring against the government, including “plotting the assassination” of Indian Prime Minister Narendra Modi.

Legal experts and activists said the charges are fabricated and aimed at targeting the critics of Modi’s right-wing government.

Teltumbde is the grandson-in-law of Dr Bhim Rao Ambedkar, a towering Dalit (the former untouchables) leader and the architect of India’s constitution.

Ironically, Teltumbde’s arrest coincided with Ambedkar’s 129th birth anniversary. During his surrender, the activist was accompanied by Ambedkar’s grandson, Prakash Ambedkar, who called it a “fraud case”.

On the eve of his arrest, Teltumbde wrote an open letter to the people of India, in which he said, “I do not know when I shall be able to talk to you again. However, I earnestly hope that you will speak out before your turn comes.”

Leading intellectuals, economists and legal experts had written to Chief Justice of India, Sharad Bobde, to “restore public confidence in our constitution and the civil liberties that it guarantees to all citizens” by stopping the arrests of Teltumbde and Navlakha.

On Sunday, senior journalists and writers held a video conference and called it a “witch-hunt” against the two activists.

Writing about Teltumbde’s imminent arrest, his daughters Prachi and Rashmi wrote in the Caravan magazine, “As we look into our parents’ eyes, we see only pain.”

“Since we heard the verdict, it feels like life has come to a halt,” they wrote.

Anand Teltumbde, in an open letter to people of India

What is the case against them?

On April 8, India’s Supreme Court denied Teltumbde and Navlakha an anticipatory bail to protect them from the arrest. One of the justices on the bench was Arun Mishra, who recently called Modi a “visionary”.

The investigation against them began after riots broke out near Pune in Maharashtra, 250km (155 miles) from Mumbai on January 1, 2018.

Tens of thousands of Dalits had gathered at a war memorial called Bhima-Koregaon to commemorate the bicentenary of the historic victory of the British colonial army, which had a substantial Dalit contingent, over the Hindu upper-caste Peshwa community.

The attendees were allegedly attacked by the upper caste groups, resulting in one death while several others were wounded.

Two right-wing activists, Milind Ekbote and Sambhaji Bhide, were accused of inciting the violence against the gathering. Ekbote was arrested and later released on bail, but Bhide was never questioned.

The Pune police, however, turned their focus on a rally that took place a day before the violence.

Police allege the Elgar Parishad rally was responsible for the January 1, 2018 violence, and that it had Maoist connections.

All these activists – who have a history of speaking out for the marginalised Dalit and tribal communities – are accused of a conspiracy to “wage war against and overthrow the government of India”.

They have been charged under the Unlawful Activities (Prevention) Act, which makes it virtually impossible to obtain bail. However, the law requires the police to submit their chargesheet within 90 days of the arrest, failing which, the accused are entitled to bail.

But in February 2019, the Supreme Court gave police more time to file the chargesheet, which made the activists ineligible for bail.

That order was delivered by the then Chief Justice of India, Ranjan Gogoi, who was nominated last month as a member of Parliament, an appointment believed to be backed by Modi’s government.

The Supreme Court order ensured that the arrested activists remained in jail. Teltumbde and Navlakha joined them on Tuesday.

The police claim to have recovered a letter from one of the 11 accused that discusses a plot to kill Modi in emails allegedly exchanged with fugitive Maoist leaders.

One of those emails allegedly mentions a “Comrade Anand”, based on which Teltumbde was charged.

However, Elgar Parishad organiser Kolse Patil told Al Jazeera the activists had nothing to do with their rally.

“I have been saying this again and again. They had nothing to do with what we organised. Thousands of volunteers and activists had gathered at our event, and we took a public oath to never vote for communal forces. That did not go down well with the establishment,” he said.

Transfer of case from Maharashtra

The governing Bharatiya Janata Party (BJP) government has been accused of pursuing the Bhima-Koregaon case to silence its critics.

That allegation became louder after the BJP government transferred the case in January to the federally controlled NIA from the Maharashtra police which had been probing it until then.

That move came only weeks after the BJP lost Maharashtra to a coalition of opposing parties in the state assembly elections.

Sharad Pawar, whose party is now a part of the coalition government in Maharashtra, had called the arrests of activists “vengeful and wrong” and had promised a fair investigation.

Teltumbde’s lawyer Mihir Desai called the sudden transfer of the case to the NIA “shady”.

“They are trying to protect the right-wing activists accused in the January 1 [2018] violence,” he told Al Jazeera. “To me, it looks like vendetta by the union government against the accused.”

“Let them decide the merits of the case,” he told Al Jazeera. “Those who think of themselves as judges are calling it vendetta. One cannot expect anything from such hypocrites.”

Vulnerable amid a pandemic

Mumbai’s streets are deserted due to the coronavirus lockdown, with Maharashtra being the worst-hit Indian state.

India has reported more than 10,000 cases of COVID-19 infections and nearly 350 deaths. Maharashtra leads the state-wise tally with almost 2,000 confirmed cases and 160 deaths.

But the state’s prisons are overflowing, marking them into potential hotspots during the pandemic.

Both Teltumbde and Navlakha are susceptible to a virus infection considering their age. Teltumbde, being an asthmatic, is even more vulnerable.

Human rights lawyer Nihalsing Rathod said when the government should be looking to decongest prisons, it was “hell-bent” on jailing the two.

“That shows political vendetta,” he told Al Jazeera. “There is no question of them running away or tampering with the evidence.”

Coronavirus: Where did it come from and how did we get here?