FRANZ JOSEF LAND, Russia — Chunky green trucks carry Bastion anti-ship missiles that can be prepared for launch in just five minutes. A barracks building, sealed off from the elements like a space station, accommodates 150 or so soldiers. And a new runway can handle fighter jets, two of which recently buzzed the North Pole.

Franz Josef Land, a jumble of glacier-covered islands in the Arctic Ocean named after a Austro-Hungarian emperor, was until a few years ago mostly uninhabited, home to polar bears, walruses, sea birds and little else. But thanks to a warming climate, all that is changing, and quickly.

Nowhere on Earth has climate change been so pronounced as in the polar regions. The warming has led to drastic reductions in sea ice, opening up the Arctic to ships during the summer months and exposing Russia to new security threats.

As the sea ice melts, Russia is deploying ever more soldiers and equipment to the Far North, becoming essentially the first military to act on the strategic implications of climate change for the region in what some have called the beginnings of a Very Cold War. 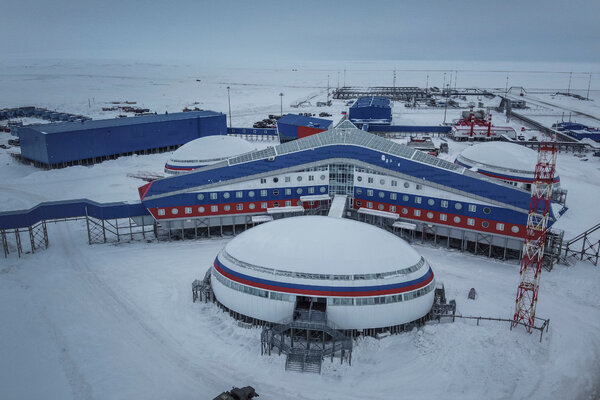 At a meeting this week in Reykjavik, Iceland, Russia assumed the chair of the Arctic Council, a diplomatic club of nations, including the United States, that share interests in the region. 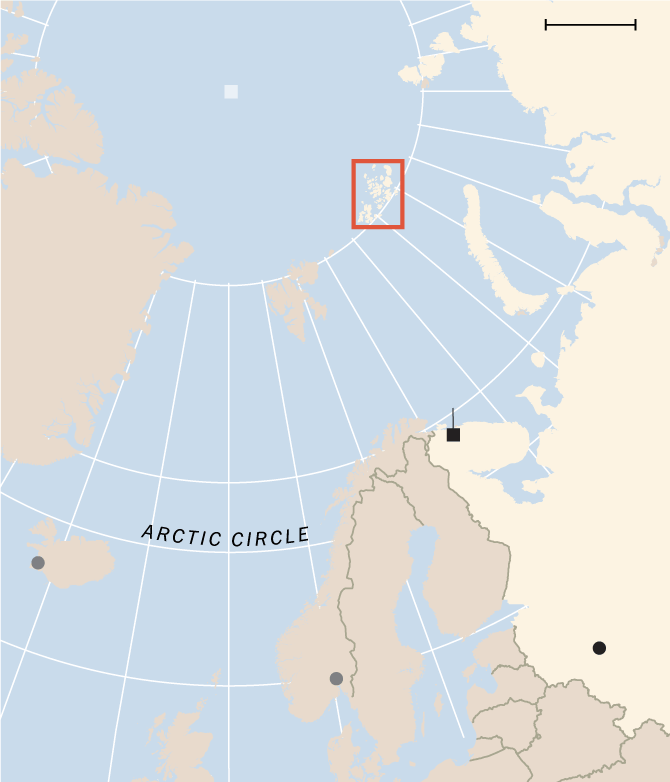 By The New York Times

On the sidelines of the meeting, Secretary of State Antony J. Blinken met with the Russian foreign minister, Sergey V. Lavrov, in the first face-to-face meeting between a Biden administration cabinet member and a Russian counterpart. Moscow’s military buildup in the Arctic was likely to be among the many issues the two diplomats had to discuss.

For its entire history, Russia was effectively defended from the north by the frozen Arctic Ocean. But the minimum summertime ice pack on the ocean in recent years is about one-third less than the average in the 1980s, when monitoring began, researchers with the Colorado-based National Snow and Ice Data Center said last year. The ocean has lost nearly a million square miles of ice and is expected to be mostly ice-free in the summertime, including at the North Pole, by around the middle of the century.

The big melt is Russia’s strategic “worst nightmare,” said Michael Kofman, a senior researcher at CNA, a think tank based in Arlington, Va. “It opens an entire new theater in the event of conflict with the United States” that will prove difficult to defend, he noted. Of the five nations with significant Arctic coastline — Canada, Denmark, Norway, Russia and the United States — Russia has by far the longest.

“In a sense, Russia is acquiring new external borders that need to be protected from potential aggressors,” the German Institute for International and Security Affairs, a Berlin-based think tank, wrote of Russia’s problem of disappearing ice.

Lt. Col. Balabeg A. Eminov is the commander of the anti-ship battery and other facilities on Franz Josef Land, called the Trefoil Base. “The main question in the Arctic is the limited accessibility for ships, because of ice,” he said. “Now the area of open water is increasing, and with it the area for ship activity.”

Though the Russian military has little in common with liberal Western politicians or environmental groups like Greenpeace, it does share a view that the ice is indeed vanishing. That has allowed it to steal a march on the United States.

The Russian government, in contrast to the Department of Defense under the Trump administration, openly acknowledged climate change in its latest Arctic strategy, published last year. The latest U.S. military strategy for the Arctic, published in 2019, refers euphemistically to vanishing ice as the “changing physical environment.”

The American document did, though, note that Russia now had the largest military presence above the Arctic Circle, and its avoidance of any mention of climate change is certain to change under the Biden administration.

Seemingly in anticipation of the scheduled meeting between Mr. Blinken and Mr. Lavrov, the normally opaque Russian military recently took reporters on a tour of sites that included Trefoil Base, Russia’s northernmost military installation.

With the journalists standing about shivering, Colonel Eminov presided over a demonstration of the Bastion anti-ship missiles, raising them to launch position as soldiers in white Arctic camouflage kept watch. “We are defending the borders of our homeland,” he said. “This is deterrence.”

In a briefing on Thursday aboard the battlecruiser Peter the Great, Adm. Aleksandr A. Moiseyev, commander of the Northern Fleet, painted the Russian buildup as a response to increased Western military activity in the Arctic Ocean.

“The navies of NATO have taken to regularly sailing single surface warships or even convoys” into the ocean and lingering longer than they had before, Admiral Moiseyev said. He called it the most significant military activity in the region since World War II. On the Russian side, the Northern Fleet will run sea trials on 13 new ships this year, he said, adding to the more than four dozen already in service.

Admiral Moiseyev spoke in the officers’ lounge, decorated with a bust of Czar Peter the Great, considered the father of the Russian Navy, and oil paintings of sailing ships in battle.

Moored at its base in Murmansk Fjord, the Peter the Great was also visited by flocks of sea gulls, which flapped around its gray-painted radar masts and over the 20 launch tubes for anti-ship missiles. Sailors with side arms stood watch by the gangplank, seemingly oblivious to the cold rain lashing their faces.

Elsewhere in Murmansk Fjord, and not shown to reporters, is another dimension of the Russian military buildup: a secretive program to train seals and beluga whales for as-yet unknown missions. Satellite images have revealed their sea pens at a special operations site. Two years ago, a trained beluga wearing a mysterious harness, possibly an escapee, turned up in Norway and was nicknamed Whaldimir.

One goal of the Russian buildup is to seize the day economically as the ocean thaws. “Climate change enables the appearance of new economic possibilities,” Moscow asserted in its Arctic plan, envisioning a new Klondike.

The Russian government and companies have developed various moneymaking ideas to take advantage of climate change. Exploiting newly accessible reserves of oil, gas and coal — the very resources causing the problem in the first place — is high on the list. Moscow also hopes to turn an Arctic Ocean seaway between Europe and Asia, the Northern Sea Route, into essentially a toll road by requiring payments for pilots and icebreaker escorts.

That could become a flash point because Washington sees the waterway as an international trading route. The Department of Defense says it reserves the right to conduct freedom of navigation exercises in the Arctic, as it does now in the South China Sea.

For now, the military standoff has played out with ships shadowing one another’s vessels during exercises, long-range bomber overflights and jamming of navigation broadcasts, a Russian specialty.

In March, the Russian Navy surfaced three submarines simultaneously through pack ice and, lest the feat go unnoticed, filmed it with a drone and posted the footage online. The United States this month sailed the U.S.S. New Mexico, a Virginia-class submarine, into Tromso, Norway, for a rare call at a civilian port.

In the same vein, the tour for foreign journalists to some of Russia’s most remote and secretive military facilities in the Arctic Ocean seemed intended to highlight the country’s capabilities.

“Inviting journalists to come look at these modernized, reinvigorated Cold War sites is all about signaling,” said Marisol Maddox, an Arctic analyst at the Polar Institute of the Woodrow Wilson Center, a research organization in Washington.

Russia, she said, wants to keep up its “strongman persona” in an era of climate change.

Great Canadian Gaming to close its B.C. casinos to limit spread of coronavirus