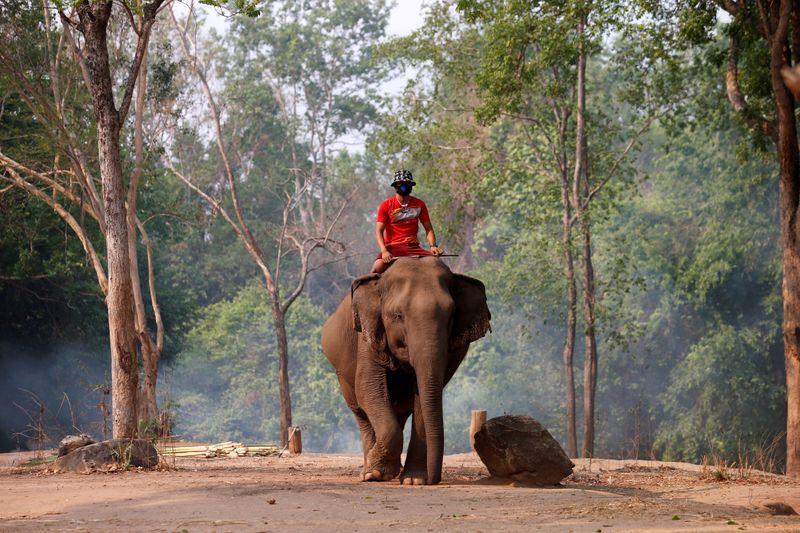 KANCHANABURI, Thailand (Reuters) – The mahouts at an elephant sanctuary in western Thailand have resorted to swimming in a nearby lake to gather weeds for fodder, as a nationwide lockdown has left them without tourist dollars needed to pay for the fruit their animals like.

In a normal season, the Taweechai Elephant Camp in the western province of Kanchanaburi would welcome more than 100 tourists per day, mostly from Russia and European countries. Each tourist would spend around $30 to $150 for different activities, such as riding or feeding elephants.

But now there is only money going out, and no money coming in. Feeding the camp’s 25 elephants, and paying the mahouts and other staff costs around 1 million baht ($30,395) a month, according to owner Dumrong Longsakul.

“I have been stressed to the point that I can’t sleep, I don’t know what to do,” said Dumrong, whose father started the camp.

Dumrong said that he can neither lay off the staff nor let the elephants go, as the elephants would be unable to fend for themselves in the wild and need mahouts to look after them.

The camp is one of many animal sanctuaries that depend on the millions of tourists visiting Thailand from around the world each year, and in all there are an estimated 2,000 elephants involved in the tourism industry.

Somkit Methachotikul, a 29-year-old mahout who gets a monthly salary of 7,500 baht ($228), said that he was worried for the well-being of his family and the elephants.

“Elephants are like our family members. If they are eating well, sleeping well, that makes me happy,” said Somkit.

Thailand has reported 2,220 cases of the new coronavirus and 26 fatalities since the outbreak first emerged in January, and the government declared a state of emergency last month.

While You Were Sleeping: 5 stories you might have missed, Dec 11