Farmers struggle as France is hit by droughts

The areas under the latest warning consist of Ain, Ardèche, Corrèze, Côte-d’Or, Doubs, Drôme, Gard, Haute-Garonne, Gers, Isère, Jura, Loire, Lot, Lot-et-Garonne, Puy-de-Dôme, Bas-Rhin, Haut-Rhin, Rhône, Haute-Saône, Saône-et-Loire, Savoie, Haute-Savoie, Tarn, Tarn-et-Garonne, Vaucluse and Territoire de Belfort. The heat has already started to take hold in the South of France with the mercury shooting up to 39C. Regions closest to the English Channel are spared the intensity for now, with eastern parts of France facing the strongest UV rays. Indications from one forecaster shows the UK may face the wrath of this new band of heat from next week, as pressure begins to build tomorrow, August 5.

According to senior meteorologist at British Weather Services, Jim Dale, he said next week could hit the early 30s in parts of the country.

“But there is no sign of  it being any higher as yet.

“It’s from a spike from the south out of Africa and up from Spain and France again.”

More as we get it. 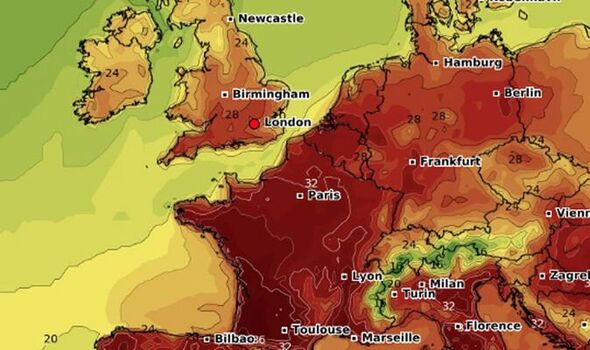 La Palma: Residents warned to stay inside as fresh lava from volcano spills off coast of Spanish island