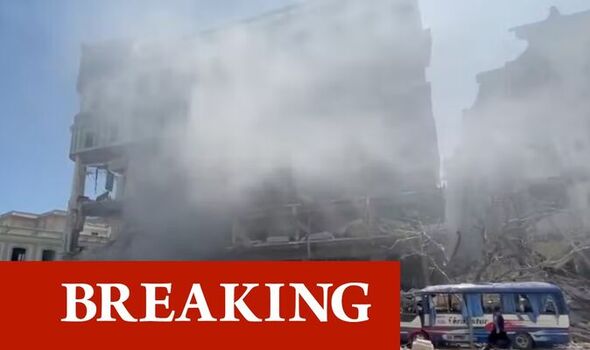 The explosion took place in the Cuban capital of Havana, with officials stating at least 13 people are missing.

Cuban President Miguel Diaz-Canel said the explosion at The Hotel Saratoga wasn’t due to a bombing.

He added that authorities are investigating the cause, although said it may be due to a gas leak.

CNN Havana bureau chief Patrick Oppman tweeted pictures of the chaotic scene, adding that the area around the “iconic hotel” was “a horrible scene of destruction”.

Mr Diaz-Canel said via Twitter: “So far 8 people have died and thirty are hospitalized.

Search and rescue is currently underway for anyone who may be trapped in the rubble.

The president’s office said Old Havana Mayor Alexis Acosta Silva informed them that the children from a school near the hotel were evacuated, and none were hurt.

She said: “The whole building moved. I thought it was an earthquake.

“I’ve still got my heart in my hand”.

The Hotel Satoga is a 19th-century structure in the historic area of Old Havana.

It contains bars, restaurants, a spa, a gym and a rooftop pool, according to its website.

China vs USA: The FIVE conflicts NOT resolved after Biden’s call with Xi Jinping

Denver had snowiest winter since 2015-16 season

Richard Prebble: The unbearable grief of not being able to say goodbye