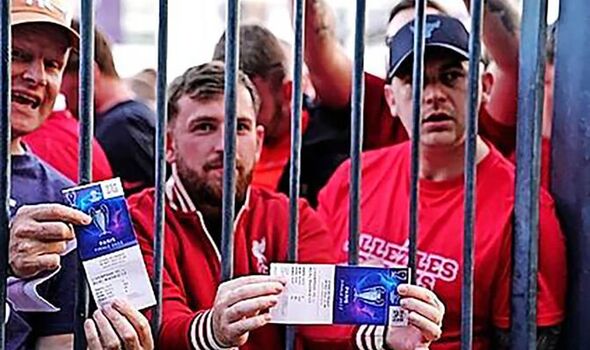 Footage of Liverpool ticket holders, including children, being tear-gassed by riot police as they tried to enter the Stade de France in Paris was described as “upsetting and concerning” by the PM’s spokesman. A No 10 official said: “We need a full investigation into what happened and the findings made public.”

UEFA last night said an independent and comprehensive review will be held. It added: “Evidence will be gathered from all relevant parties.”

Boris Johnson’s backing for a probe came after the French interior minister blamed fake tickets for the fiasco.

Gerald Darmanin said: “There was massive fraud at an industrial level and organisation of fake tickets – 70 percent were fake coming into the Stade de France. The massive presence of the fake tickets meant there were delays.”

He added: “This kind of incident only seems to happen with certain English clubs.” Mr Darmanin claimed “half” of the 29 people arrested inside the ­stadium for offences including trespass “were British”.

Police made 68 arrests and 174 people were injured. Liverpool went on to lose 1-0 to Real Madrid.

Ian Byrne, the Labour MP for Liverpool West Derby, attended the match and said he had not witnessed such scenes since the 1989 Hillsborough disaster. He has written to Foreign Secretary Liz Truss with a list of demands, saying: “The French authorities are quite simply covering their backs with this narrative.

“The situation outside the ground was one of the most horrendous experiences of my life. As a Hillsborough survivor, I do not make this comment lightly.”

Nagorno-Karabakh says death toll among its military rises to 280 since start of conflict: Ifax

Relief rally or bear market bubble? For investors, it's hard to tell