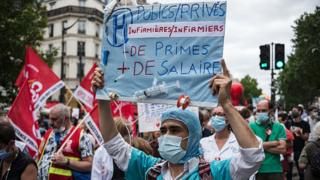 The French government has agreed to give pay rises worth €8bn (£7.2bn; $9bn) to health workers, as it hailed their role in fighting coronavirus.

The deal was signed with trade unions on Monday after seven weeks of fraught negotiations.

Health workers have been revered as heroes during the pandemic with regular displays of public appreciation.

But they wanted more than recognition and have held protests to demand pay rises and better funding for hospitals.

Some demonstrators were fined for breaking social-distancing rules. More than 200,000 infections and 30,000 deaths have been recorded in France, one of Europe’s worst-hit countries.

Now the government has reached an agreement on pay that will see the wages of health workers rise by €183 a month on average.

The agreement, which most trade unions have signed up to, was hailed by the new French Prime Minister, Jean Castex, as a “historic moment for our health system”.

“This is first of all recognition of those who have been on the front line in the fight against this epidemic,” Mr Castex said at a signing ceremony.

“It’s also a way of catching up the delay for each and every one – including perhaps myself – has their share of responsibility.” 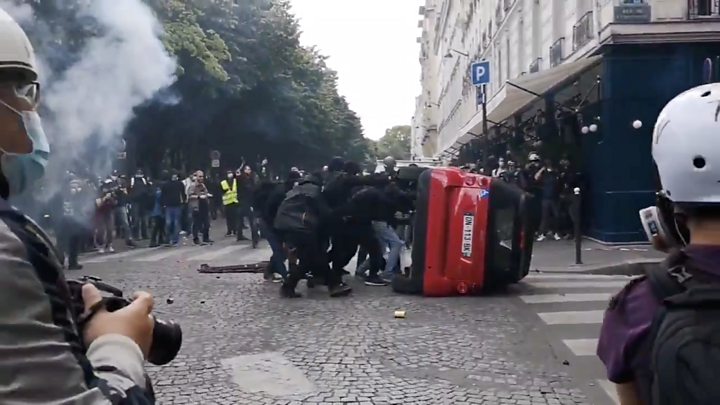 Most of the pay-rise package will cover the wages of nurses, care workers and non-medical staff.

Some – around €450m – has been reserved for doctors who work exclusively in the public sector.

The move to increase wages comes a day before Bastille Day, a national public holiday on which health workers will be lauded for their efforts during the pandemic.

More low-key celebrations than usual have been organised for the 14 July holiday this year, as Covid-19 restrictions remain in place.

A parade will be held on the Place de la Concorde in the capital Paris, where around 1,400 nurses, doctors and carers will watch on as the guests of honour.

What’s the political background to this pay-rise deal?

French President Emmanuel Macron has spent much of the first part of his term embroiled in disputes with unions.

He signalled ahead of a recent cabinet reshuffle that he wanted to focus more on social justice in the last years of his term.

Earlier this month, Edouard Philippe tendered his resignation as prime minister, despite being considered more popular than Mr Macron in opinion polls.

Mr Castex, a little-known civil servant who has played a key role in the government’s response to the Covid-19 pandemic, was named as Mr Philippe’s successor.

Mr Macron came to power three years ago but now faces an economic crisis after the coronavirus pandemic. The next presidential election is due to be held in April 2022.

Explainer: What are the main areas of tension in the U.S.-China relationship?