Attempts at social distancing have been undermined as people queue for emergency visas and mass gatherings continue. 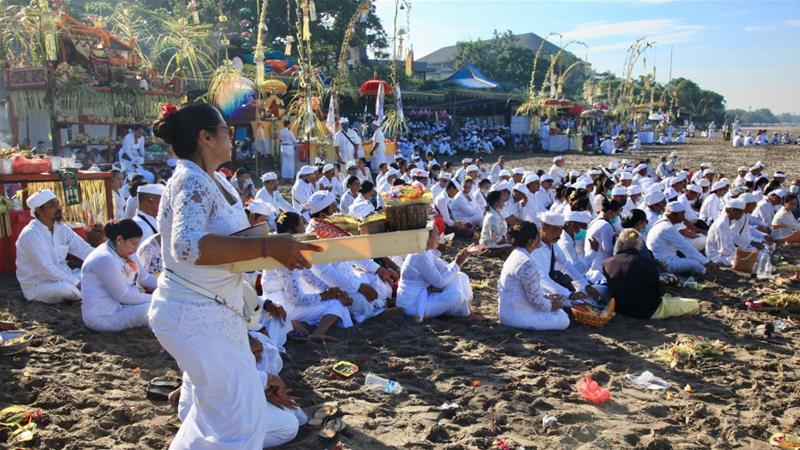 Denpasar, Indonesia – Authorities in Bali will allow tens of thousands of people to attend Hindu ceremonies for the island’s new year, or Nyepi, celebrations this week in contravention of Indonesian government calls for social distancing, in a move that experts fear will fuel a dangerous increase in cases of COVID-19.

Thousands of foreigners who cannot or do not want to fly home are also having to queue for hours in crowded buildings to renew their visas, creating another potential virus risk on an island that has no testing facilities.

So far, only 71 people on the island of 4 million have been tested by laboratories in Jakarta, which are taking a week or longer to deliver results, and around 40 flights are still scheduled to arrive at the airport each day from the capital despite the declaration of a state of emergency there.

Experts worry that without action, the Indonesia resort island could face a sustained and deadly outbreak.

“If there is not enough testing happening in the early stages, it’s very likely to happen because they won’t know it’s present until people start dying about three weeks later,” said Joel Miller, a mathematical epidemiologist focusing on infectious diseases at Australia’s La Trobe University.

“By that time it will have become a well-established epidemic and the healthcare system of any country will struggle to respond, which is what’s happening in Italy right now.”

Italy, which has now recorded more deaths from COVID-19 than China, has the world’s second-best healthcare by population size, according to Health Care Rankings. Indonesia, which has a population nearly five times the size of Italy’s, is ranked 92nd, just ahead of Iran but far behind Spain and South Korea which are grappling to control outbreaks, even with their more sophisticated health systems.

“In Australia, we have a developed health care system but Bali is not so well equipped. From a public health perspective, it sounds horrific.” 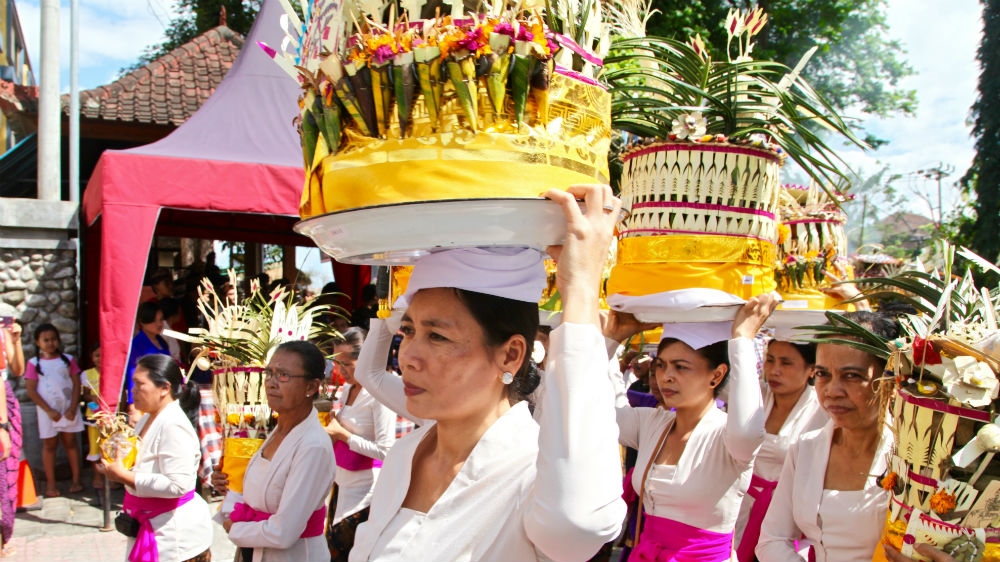 Over the weekend, Bali’s regional secretary Dewa Made Indra said the island had only three confirmed COVID-19 cases: a 52-year-old British woman who died under isolation at Sanglah Hospital; a 72-year-old Frenchman who collapsed while riding a scooter and who was originally thought to have had a heart attack; and an unidentified resident.

But at the same time, disturbing video footage emerged of a young tourist from Kazakhstan gasping desperately for air after paramedics were called to a guesthouse at Uluwatu, a popular surfing spot on Bali’s Bukit Peninsula. The man and his wife, who also had a high fever, were taken to Sanglah Hospital in the capital Denpasar where a doctor who treated the 52-year-old British victim has also tested positive for COVID-19.

Al Jazeera also spoke to an American woman suffering from coronavirus-like symptoms at the same hospital who claims there are at least 10 other patients in isolation in her ward.

“There are seven locals and three other foreigners just in my hospital’s coronavirus treatment wing,” said Leah Fawn, who is from Washington DC, and has been waiting more than a week for her test results.

“I have no idea where they are from as I can’t see or speak to them. And while I’m being treated very, very well, I’m growing impatient and anxious because I still haven’t received our test results from Jakarta.”

Fawn said she saw many others with suspected COVID-19 cases when she presented herself at the hospital.

“I rode out the symptoms alone as per my doctor’s advice before I went to the hospital. I’m glad I waited because I saw several people turned away at intake who were sick, but didn’t show serious signs of pneumonia. They were told to go because they weren’t sick enough to warrant testing. So sick people in the first stages are going back home to self-isolate but are potentially blending back in with healthy people.”

Fawn is one of tens of thousands of Westerners who stay in Bali on tourist or business visas that require them to leave Indonesia every 60 days.

Over the past week, hundreds of them scrambled aboard flights to Singapore, Kuala Lumpur and other cities in the region to ensure their legal status in the country as borders tightened. But some became infected – or infected others – during their journey. 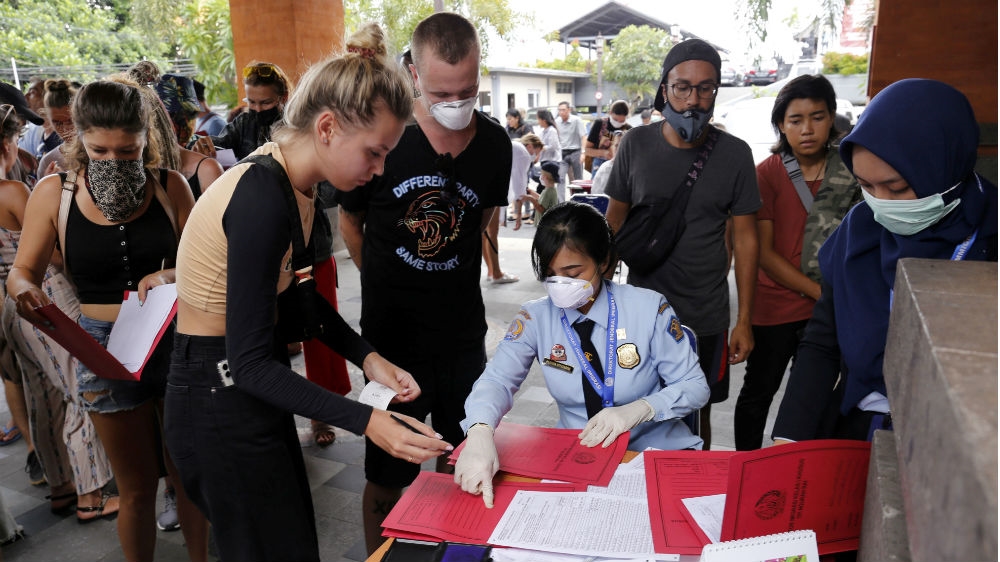 “When I flew out, only about a quarter of people wore masks so there could have been many sick people spreading the virus while flying,” Fawn said. “Three days after I got back I began to feel the first symptoms – a mild tightness in the chest, headaches, fever, burning eyes, coughing and a sore throat that was so bad I couldn’t even swallow.”

Visa-runs became a non-issue on Friday after the central government stopped accepting new tourists. It also announced that visitors stuck in the country because of border closures and flight cancellations could apply for an emergency visa extension.

But that requires them to appear in person at an immigration centre to be photographed and fingerprinted. On the first day alone, an estimated 700 tourists submitted applications at the Jimbaran immigration office in the south of the island. On Monday, the queue of tourists awaiting visa extensions stretched for more than 100 metres.

“They would not allow me in after waiting in line,” Gabby Marie, an American tourist wrote on a Facebook page for expats in Bali. “They closed the entrance for a little bit after it was full. It was obviously extremely crowded and disorganised.”

A receptionist at the immigration office acknowledged the process contradicted social-distancing polices but said the office had no authority to alter official protocols.

“We cannot do social distancing because we need the ensure that the person matches the photo on their passport, and because things are chaotic due to the large number of emergency visa requests,” the receptionist said.

Nevertheless, many of the island’s remaining tourists are continuing their holiday as though nothing has changed.

On Saturday afternoon, hundreds flocked to the beaches of Seminyak and Canggu to see Bali’s famous blood-red sunsets, play football, surf and swim. Many sat close to one another at small restaurants and bars.

At a venue called La Plancha, small groups were seen sharing communal “shisha” water pipes whose use has already been banned in some countries for fear of spreading the disease.

Most of the larger tourist venues in Bali have closed because of a lack of business, or are taking the temperature of those who wish to enter.

But according to Miller, taking peoples’ temperatures “does not provide much security because the evidence suggests that a decent amount of COVID-19 transmission comes from infected people who are yet to show symptoms”. 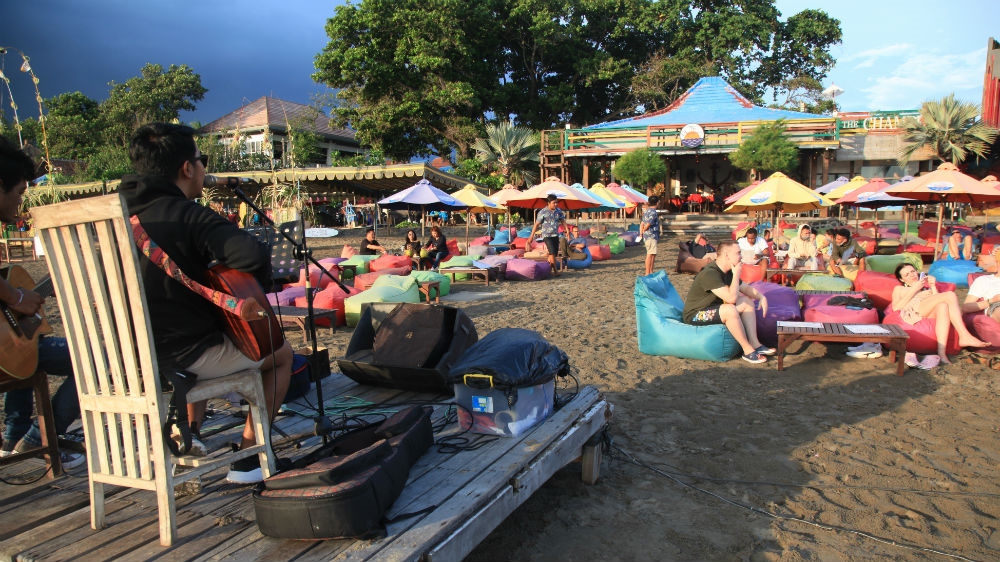 On Sunday morning, 2,000 to 3,000 Balinese Hindus dressed in white gathered at Double Six Beach for Melasti, a ceremony geared to cleanse the world of bad karma. Hundreds of similar ceremonies were held around the island. Another ceremony with more than 1,000 residents was held at a beachfront temple in the afternoon.

A “pecalang” traditional security guard at Double Six said the space was safe because face masks, like the one he wore, were effective deterrents. But only about 10 percent of devotees wore face masks to the event, while many who brought masks wore them over their foreheads.

Melasti is a series of Hindu rituals held in the lead up to the Nyepi Day of Silence on March 25 when everyone in Bali must remain inside their homes or hotels and the internet is switched off to engender self-reflection. It is the only day of the year when the airport closes.

The end of Nyepi is the equivalent of New Year’s Eve, when Balinese travel to their villages and attend elaborate public parades. The day after Nyepi, thousands more attend “Omed-omedan” – a massive street carnival in Sesetan in southern Bali where unmarried men steal kisses from single women.

Pak Ray, head of the Sesetan “banjar”, a level of local government, acknowledged “the risk is big” but said the kissing ritual could not be cancelled.

“A few years ago they didn’t hold the ritual, the village had a disaster and lots of people suddenly died from disease,” he said.

Bali’s Governor Wyan Koster has placed limits on the size and duration of this year’s celebrations.

But if Sunday’s turn-out at Double Six is anything to go by, the New Year will continue as normal. And that, says Miller, will throw fuel onto the coronavirus fire.

“Even if there is not much of an infection right now, when you have people from different places gathering together and then going back home, that sort of thing can really accelerate the spread,” he said.

For Acadian fisherman, early Mi’kmaq fishery in N.S. bay can ‘never’ be respected

A third dose of the AstraZeneca vaccine is found to boost immune response.

The officer killed when a driver rammed into him at the Capitol will lie in honor in the Rotunda.