Mr Sanchez appeared to make a thinly veiled reference to the lack of EU solidarity during the ongoing coronavirus pandemic has he labelled it the biggest crisis since World War 2. The Spanish Prime Minister said in an op-ed piece published in French daily Le Monde on Sunday: “Europe is experiencing its biggest crisis since the Second World War. The bloc is facing a war that is very different to the ones it has managed to avoid over the last 70 years: a war against an invisible enemy that puts the European project to the test.”

Before adding: “There can be no cohesion without solidarity. And without cohesion, disaffection (with Europe) will take root and the credibility of the European project will be seriously jeopardised.

“Europe was built on the ashes of destruction and conflict … and if we do not win this war (against the virus) together, then we will all lose.”

“As a Union, we can either rise to the challenge or fail. We are facing a critical moment in which even europhile countries such as Spain need proof of true commitment and strong solidarity.”

The socialist leader then insisted the coronavirus crisis “may be the opportunity to build a stronger Europe”.

He added: “The future of Europe is at stake.”

The coronavirus outbreak has brought the bloc’s economy to its knees and the hardest-hit states – Italy, Spain and France – want a massive response from their EU partners in a historic act of financial solidarity.

Mr Sanchez this weekend reiterated his support for the launch of jointly issued debt by eurozone members as a way to counter the coronavirus economic impact, an idea championed by Paris, Rome and Madrid but rejected by the wealthy nations of northern Europe.

The likes of Germany, Austria, Denmark, Finland and the Netherlands have refused to back an agreement that would allow joint borrowing over fears it would leave them liable for the debts of what they see as more spendthrift countries in southern Europe. 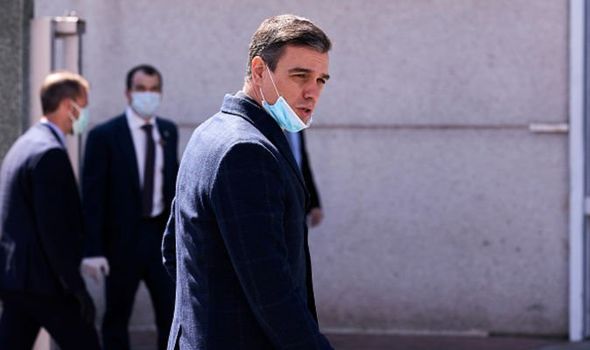 Eurozone finance ministers are expected to converge on Tuesday on three quick options to support the bloc’s economy: the use of the European Stability Mechanism bailout fund, the European Investment Fund and the European Commission’s short-time work scheme.

In addition, France has proposed a fund worth several hundred billion euros financed by joint borrowing that would be used solely to fund public spending for the economic recovery after the current downturn.

Spain has the second highest coronavirus death toll in the world after Italy, but fresh data gave some glimmer of hope that the worst may be passing.

On Monday, the country reported 637 fatalities in the previous 24 hours – a 5 percent increase in total and less than half the pace recorded a week earlier. The total death toll currently stands at 13,055.

Spaniards have been under strict lockdown since March 12, and are only allowed to leave their homes for essential outings, such as buying food or seeking medical care.

Coronavirus super-spreader could ‘spark third wave on their own’