Mr Macron told French newspaper Le Journal du Dimanche (JDD): “It’s a war. And it’s going to last (for an unknown period of time). My role is to supervise. I need to be on the frontline, visit hospitals, meet with healthcare workers, anticipate.

“The first wave of cases has hit (France). We must tackle this public health emergency, protect the weakest, the elderly and our healthcare system itself.

“We are responsible for the whole of society, its stress levels and its ability to live through this pandemic as a nation. (This crisis) will be a test of solidarity for our democracy.

Mr Macron also warned France was “nowhere near the end” of the crisis: “We are going to face an unprecedented financial crisis, a real economic meltdown.”

The government’s response is “not perfect” because there is a lot that we “still don’t know” about the flu-like infection, he continued, insisting that the key to containing the virus was to “respect” the strict confinement measures “without bringing society to a halt”. 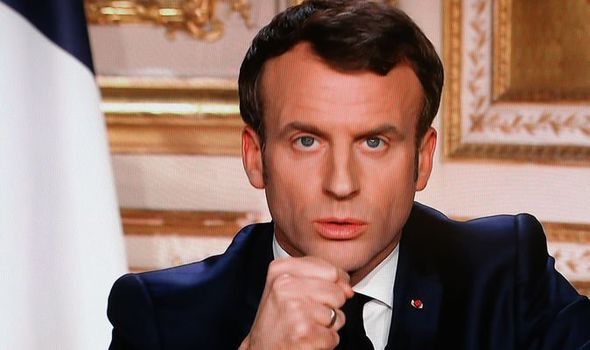 France went into lockdown last week, ordering restaurants, bars, schools and all other non-essential businesses to close in an effort to curb the outbreak.

On Sunday, the coronavirus death toll recorded by French hospitals rose by 112 to 674, while the number of confirmed cases increased by 11 percent to 16,018 over 24 hours.

A quarter of the more than 7,200 people now in hospital with the virus are in intensive care.

The head of the public health authority Jerome Salomon told a daily press briefing: “We are looking at an epidemic that is widening and escalating. The virus kills and it is continuing to kill.”

His comments came shortly before the State Council – France’s top administrative court – rejected demands that it adopt harsher confinement rules, including a shopping ban, but the government is taking its own advice on tighter measures.

Parliament toughened fines for people who violate the current confinement measures late Saturday. Repeat offenders now face a six-month prison sentence and a fine of up to 3,700 euros (£3,432).

And on Sunday it declared a health emergency in the country, granting greater powers to the government to fight the pandemic. The Macron administration is also under mounting pressure from doctors’ unions and regional officials to impose a nationwide curfew.

France is expecting preliminary results within two weeks from a clinical test of the effectiveness of anti-malaria drug hydroxychloroquine against COVID-19, the condition caused by the virus.

There are as yet no vaccines or treatments approved but trials are underway in the United States and Europe to see whether hydroxychloroquine can prevent, or reduce the severity of, the disease.

French hospitals began testing the anti-malarial and three other drugs on Sunday as part of a European programme involving 3,200 COVID-19 patients.

George Galloway in furious rant over ‘Little Bonaparte’ Macron ‘Your streets are burning!’

Cancelling travel over coronavirus? Why a flight refund isn’t guaranteed

Robot food delivery on the rise