Liz Allen, Ms Harris’s communications director, tested positive on Wednesday evening, as did a member of crew on a flight the vice presidential candidate took on 8 October.

She had been scheduled to travel to North Carolina on Thursday for events encouraging voters to cast early ballots.

The vice presidential candidate has tested negative twice for COVID-19 since the flight, and was not in close contact with either of the people who came back positive – meaning she will not need to self-isolate, according to a statement from Joe Biden’s presidential campaign.

Mr Biden’s campaign said the presidential candidate had no exposure, though he and Ms Harris spent several hours together in Arizona on 8 October.

Ms Harris and Mr Biden spent several hours together that day through multiple campaign stops, private meetings and a joint appearance in front of reporters at an airport. 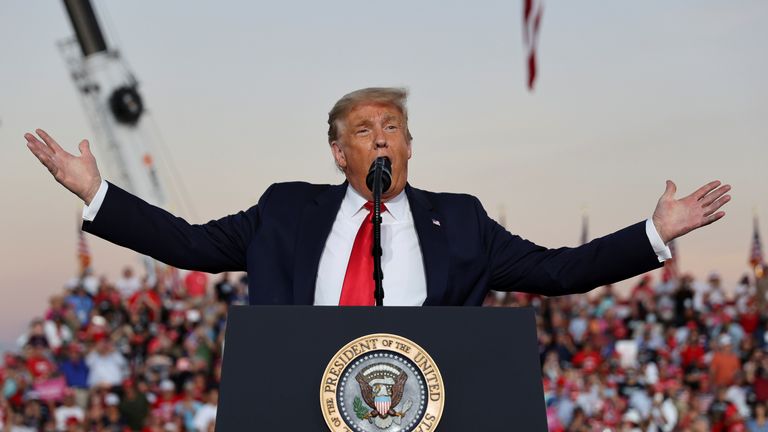 Ms O’Malley Dillon added Ms Harris is suspending travel for several days “out of an abundance of caution”.

He is scheduled to attend an ABC News town hall airing live at 8pm on Thursday.

US President Donald Trump addressed a crowd in Florida on Monday – 11 days after he announced he had tested positive for coronavirus.

Dr Anthony Fauci, a member of the US government’s coronavirus task force, had earlier criticised the White House of hosting what he says turned out to be a “superspreader event” linked to an outbreak of COVID-19.

A number of Mr Trump’s aides and allies tested positive for COVID-19 after attending a Rose Garden event where the president unveiled Amy Coney Barrett as his Supreme Court pick.