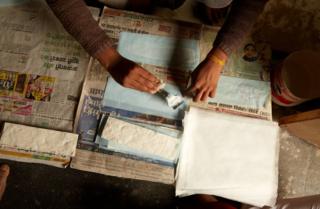 Schoolgirls in India are facing a massive shortage of sanitary napkins because schools – a critical part of the supply chain – are closed during the coronavirus lockdown. This has left millions of teenagers across the country anxious, writes the BBC’s Geeta Pandey in Delhi.

For the past several years, Priya has been receiving a pack of 10 sanitary napkins every month from her school.

The 14-year-old, who lives in Badli, a slum in northwest Delhi, attends a state-run school where pads are distributed to all female students in middle and senior school under a government scheme to promote menstrual hygiene.

It’s an important campaign in a country where only 36% of its 355 million menstruating females use napkins (the remaining use old cloth, rags, husk or ash to manage the flow) and nearly 23 million girls drop out of school annually after they start their periods.

But, with schools shut because of the lockdown, the supply of pads too has stopped.

Priya considers herself lucky that her parents can still pay for her to buy pads. Many of her neighbours have lost their jobs in the lockdown and can’t even afford food. Girls in those families have had to start using rags.

Just a few miles from Priya’s home in Badli is Bhalaswa Dairy, a slum that’s home to around 1,900 families. Madhu Bala Rawat, an activist who lives and works in the area, has also flagged the shortage of sanitary napkins for schoolgirls.

“Periods don’t stop during a pandemic. Pads are essential for women, like food. Why does the government ignore our requirement,” she asks?

Most girls in the slum, including her 14-year-old daughter, are dependent on the supply from their school because they can’t afford to buy sanitary napkins, she says.

“The girls are worried, how will they deal with their periods now? They don’t like to use cloth anymore because they have become used to disposable napkins. The government should supply it with the monthly ration.”

After Ms Rawat sent out an SOS, Womenite, a charity that works on menstrual hygiene, distributed 150 packs of sanitary napkins in Badli and Bhalaswa Dairy in April.

Harshit Gupta, founder of Womenite, says they have raised funds to distribute 100,000 more packs in Delhi and some surrounding districts in May to coincide with international menstrual hygiene day on the 28th.

“We’ll start distributions in the next few days,” he told the BBC.

There have been other similar initiatives across India.

One sanitary napkin manufacturer distributed 80,000 pads in Delhi and Punjab.

And police in cities like Bangalore, Hyderabad, Jaipur, Chandigarh, Bhubaneshwar and Kolkata have been roped in to hand them out to residents of slums as well as stranded migrants in relief camps.

On Monday, India’s governing Bharatiya Janata Party (BJP) announced it would be giving 600,000 packs to police to distribute among adolescent girls and women in Delhi slums.

But it’s not just the cities. The shortage of pads is being felt across the country and the problem is much more acute in semi-urban and rural areas, says Shailja Mehta, who works on issues of adolescents at Dasra, a philanthropic organisation.

“During our conversations with our partners in several states, we heard that only 15% girls had access to sanitary napkins during the lockdown.

“With schools shut, the girls are getting pads only through the community health workers who are handing over whatever little supplies they have.”

The problem started when India first imposed a country-wide lockdown on 25 March, and sanitary napkins were not in the list of essential items which were exempt from restrictions.

It was only on 29 March, after reports that chemists, grocery stores and online sites were running out of pads, that the government added sanitary napkins to the list of essentials. The delay caused nearly 10 days of production loss.

“After the government allowed us to operate, it took us another three to four days to restart the factories because we had to get all the required permissions and passes for our workers,” Rajesh Shah, president of Feminine and Infant Hygiene Association of India, told the BBC.

Mr Shah says production is still partially resumed because there’s an acute shortage of workers who have fled the cities for their villages.

“Only 60% of the factories are operational and not one is operating at full capacity. There is a shortage of workers, factories in ‘containment zones’ are not allowed to open, and there are massive disruptions in the supply and distribution chain.”

There’s a massive shortage of sanitary napkins, he says and warns that the situation will get worse before it gets better.

The impact is already being felt in the nooks and crannies of India.

Tanya Mahajan of the Menstrual Health Alliance of India (MHAI), a network of NGOs, manufacturers and experts that works to create awareness about periods, says their partners from across the country have reported “significant disruptions” in supplies, especially in remote rural areas.

“The first to suffer is always the last mile,” she says.

“In remote villages, where pads are not available in the local store, people have to go to the nearest town or district centre which could be 10-40kms away. Also at present, there is limited mobility because of social distancing and a lack of public transport.”

And most girls may not be comfortable asking men in the family to procure pads for them since periods is a taboo subject not openly talked about in Indian families.

As a result, Ms Mahajan says, many adolescent girls who were dependent on getting supplies from their schools, have started using cloth pads.

Considering that India uses a billion pads a month and the plastic in the disposable pads means they are not biodegradable, campaigners say reusable products such as menstrual cups and cloth pads are a much more sustainable alternative.

Irrespective of what is used, says Arundati Muralidharan of WaterAid charity, it is essential to ensure hygiene – reusable cloth pads must always be cotton, they must be washed properly and dried in the sun before being reused.

It may sound simple, but is not so easy to achieve.

In slums, when all the men are at home because of the lockdown, girls and women may find it difficult to use toilet facilities as frequently as they like and in villages, getting additional water to wash pads and put them out in the sun to dry could be difficult.

“Many of our partner organisations say women and adolescent health has taken a backseat during the Covid-19 crisis and it’s important to address that,” Ms Muralidharan says.

Abandoned pup was ‘skin and bones’ before amazing transformation at shelter

‘Over my dead body!’ Gibraltar politician vows to not give Spain one millimetre of The Roc