Despite pubs being forced to close because of the lockdown, one in Dublin is ensuring its customers can still enjoy their favourite tipple by delivering them straight to their doors.

Richard Grainger, who owns family-run Graingers Hanlons Corner, was forced to shut just days before St Patrick’s Day because of the COVID-19 pandemic, and says he has been inundated with orders for his dial-a-pint service.

He explained the doorstep service emerged after customers said they were going to miss a beer and that “some asked me if I could bring a pint over to them”. 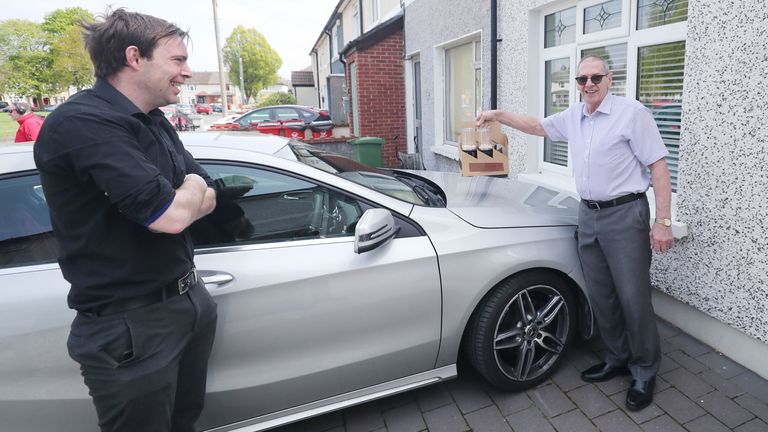 “I started bringing a few to them and then it snowballed from there,” he continued.

“The customers ring the off licence and give their address and phone number and how many pints they want.

“The pints go into a container and we put tops on them so they’re sealed, then we put them into the back of the jeep and bring it to their house.”

The service runs from 10am until 10pm all week, but Mr Grainger said they stay local.

“We’ve been hounded with calls, but we want to keep it limited. We like to keep it small.”

He says they have received orders from people living in America, Australia, Dubai and Turkey who have family living near the pub and want to send a drink to their home.

He said: “Times are hard, so when people get the drink they really appreciate it.

“We also do a food service, and on a Sunday people order a roast beef and a pint.

“We look after people who are cocooning and can’t get out of their house.”

Mr Grainger says they don’t just deliver pints, but “everything from, spirits, wine, cans and cocktails – it’s very full on”.

Via Rail calls back most of 1,000 workers laid off by Wet’suwet’en blockades