Shocking footage captured the moment hundreds of German protesters tried to storm into the historic Reichstag building. Police barricades were overwhelmed by the furious protesters, who were demonstrating against the German government’s COVID-19 protection measures. A violent confrontation with police at the German parliament broke out after a daylong rally, which drew nearly 40,000 protesters to the Berlin streets.

Similar protests also erupted across European capitals in London, Paris and Zurich, although these rallies were smaller in size.

Dramatic footage from the rally in Berlin showed hundreds of protesters run past police and up the stairs of the historic Reichstag building.

However, the police intercepted the protesters before they were able to enter the actual parliament.

Berlin police later said stones and bottles were thrown by the protesters during the confrontation. 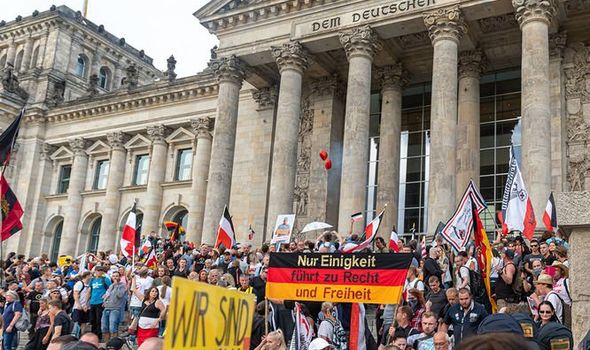 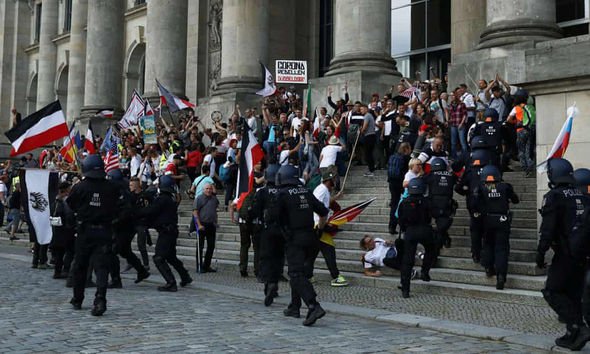 Some of those in social media footage can be seen waving the flag of the German Reich of 1871-1918 and other symbols of the far-right.

Germany’s top security official condemned the incident, as the interior minister, Horst Seehofer said: “The Reichstag building is the workplace of our parliament and therefore the symbolic centre of our liberal democracy.

“It’s unbearable that vandals and extremists should misuse it.”

Police in the German capital broke up the mass protest several hours after it started, after demonstrators failed to comply with social distancing guidlines. 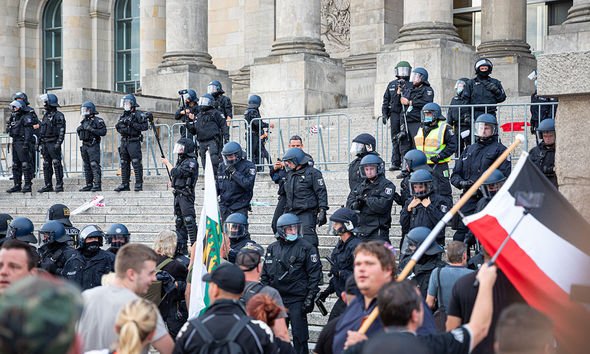 Berlin police later confirmed they had detained around 300 people during the rally.

City authorities had initially tried to stop the march from going ahead, citing fears that safety measures would be ignored.

The ban sparked outrage from organisers who vowed to protest anyway, with some even calling for violence. 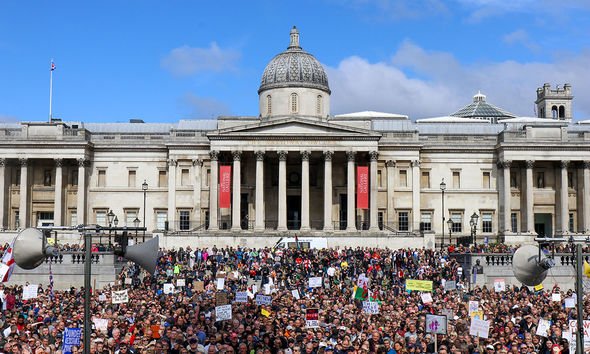 Germany has recently experienced a rise in new coronavirus cases, with the country’s disease control agency recording almost 1,500 new infections over the past day almost.

In London, hundreds of people packed into Trafalgar Square for a ‘Unite for Freedom’ protest against lockdown restrictions and face mask mandates.

Around 300 people took part in a similar rally on Saturday in eastern Paris to protest new mask rules and other restrictions.

Masks are now required everywhere in public in Paris as authorities warn that infections are growing exponentially.

Nipah virus alert: Disease could ‘spread like wildfire’ and we ‘won’t be able to stop it’