BBC Weather: UK to be hit by snow as temperatures drop

BBC Weather forecaster Matt Taylor warned snow showers are set to hit parts of the country this weekend with bitterly cold winds coming from the east keeping temperatures below freezing levels. He said: “This evening and overnight, the skies will clear from the North but plenty of cloud to the south and west with showers. But with the clearer weather elsewhere, temperatures more widely below freezing tonight into tomorrow and coldest of all, parts of western Scotland, north-west England.

“The setup through the weekend, high pressure to the west and low pressure to the east and northerly winds to begin, bringing wintry showers in northern Scotland with snow across the tops of the mountains.

“Showers in west Wales and Cornwall, some of them heavy. There could be sleet over hight ground.”

He added: “As we go into the start of next week, easterly winds.

“Normally at this time of year they can bring bitter air but we are tapping into air from south-east Europe, so it will not be quite as cold.

“But temperatures staying below where they would be at this time of year.

“3C to 6C expected. A little bit of snow over the hills. It will stay cold.” 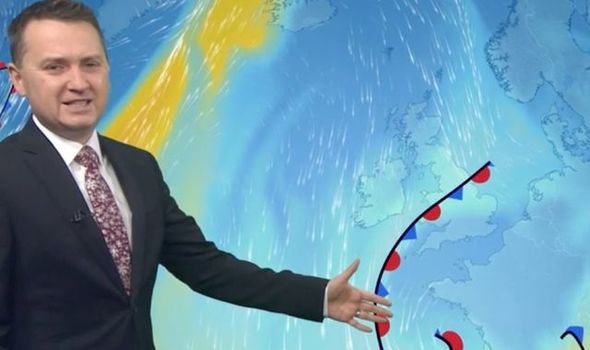 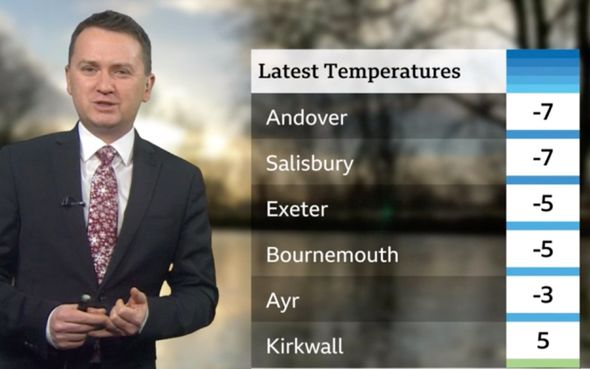 The Met Office has issued two new weather warnings for the New Year period as ice and snow is forecast to grip southern parts of the UK.

The yellow warning cautioned that showers in south-west England will pose a risk of ice from 6pm on New Year’s Eve until 9am on January 1.

The forecast went on to add ice could linger on Saturday as temperatures continue to plunge.

The Met Office said: “Showers continue at present, with some heavy hail, as well as sleet and hill snow.

“With temperatures already low, and falling steadily after dusk, ice looks likely to form on many untreated surfaces.

“Early in the night further showers may wash off applied grit and salt, increasing the likelihood overall.”

In a tweet urging drivers to avoid the stretch of the M5 north of Cullompton, Devon and Cornwall Police said: “A large amount of snow has fallen on the M5 between Jct 27 and 28 on both carriageways.

“Northbound is doing 20mph, Southbound crawling/standstill. Please avoid for the time being, consider having a hot drink at services if you can.”

Met Office yellow warnings for snow and ice in parts of Northern Ireland, most of Scotland and parts of North Wales and northern England had remained in place overnight into Thursday.

North Wales Police advised motorists to avoid all non-essential journeys as officers dealt with several collisions on the A55 amid dangerous conditions caused by snow and ice.

RAC Breakdown spokesman Simon Williams said: “We strongly urge drivers to exercise caution on New Year’s Day with a high risk of both snow and ice on the roads.

“The message for those who have to drive is to adjust their speed according to the conditions and leave extra stopping distance so 2021 doesn’t begin with an unwelcome bump and an insurance claim.

“Snow and ice are by far the toughest driving conditions, so if they can be avoided that’s probably the best policy.”