BBC Weather: Parts of UK set to be hit by severe storms

The BBC Weather meteorologist warned the rain will plague most of southeast of England through most of Friday, with a risk of flooding for those areas taking the brunt of the storms. Widely dry for Scotland, Northern Ireland, and western areas, the sunshine turning hazier towards the end of the day. Forecaster Matt Taylor warned the thunderstorms could make things difficult for players in the long-awaited England-Scotland match at the Euro2020 set to be played at Wembley on Friday evening.

Mr Taylor said: “It’s difficult for the London area, there could be some storms around unlike first thing this morning in Scotland.

“Lovely sunshine here and it should be a fine day towards Scotland and the west.

“But to the south and the east, this is where we’ve got some heavy rain and some nasty thunderstorms later.

“There could be some flooding going with that as well. Really through central and eastern area some of the heaviest rain, now pushing towards southernmost parts. 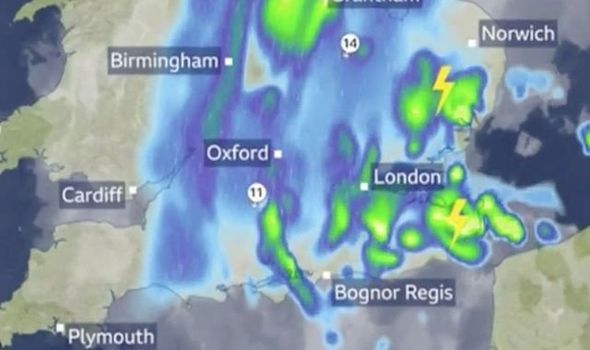 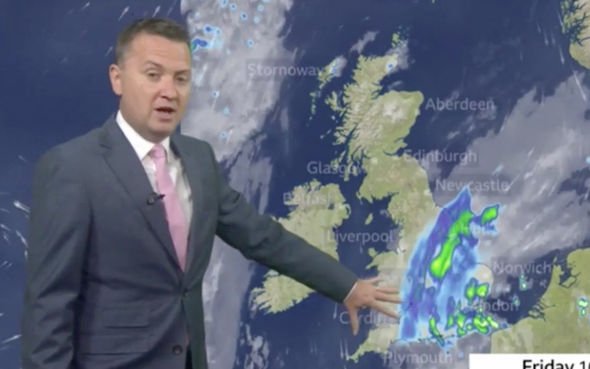 “Elsewhere, we’ve got a largely dry area there, some showers in Scotland but across of Scotland, much of Ireland, into the west of England and Wales it should stay dry with sunshine.”

The BBC Weather forecaster continued: “Sunshine turns a little bit hazy later on and rain will be heaviest across eastern parts of England.

“Quite a humid day toward the south and the east after a fresher start elsewhere. It should be pleasant in the sunshine, we end the day with those severe storms still rumbling around across the eastern part of England.

“As much as month’s worth of rain in places hence the risk of flooding later on. 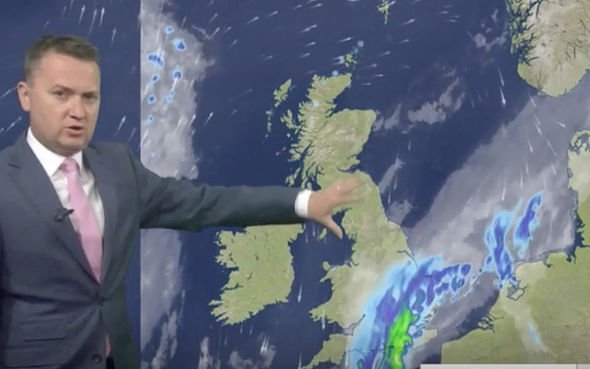 “Contrast that with the north and the west, with lighter winds, a bit of a breeze and then, through the night, that rain clears its way northwards and eastwards and we will see things turn drier for the start of Saturday.”

Mr Taylor added: ” Just a few showers in the west, there’s more rain to come into Saturday night and into Sunday.”

The Met Office issued a yellow thunderstorm warning affecting all of southeast England.

Locals have been warned some homes and businesses may be flooded quickly because of the heavy rainfall. 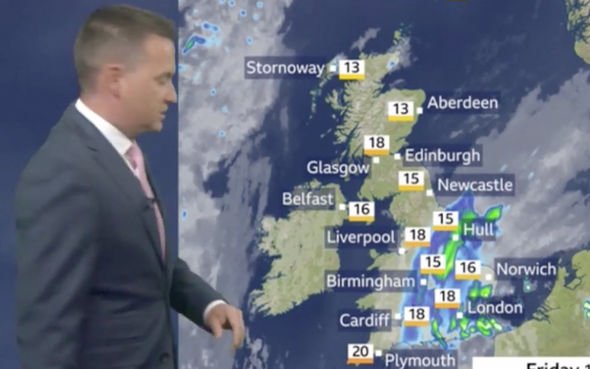 Some communities have also been warned they might become cut off by flooded roads, and spray could lead to difficult driving conditions.

The thunderstorm warning is due to remain in place until 6am on Saturday.

The Met Office’s forecast for Saturday read: “Dry with sunny spells for most areas and generally warmer than today.

“Cloudier across parts of Scotland where a few showers. Thunderstorms may move into southern UK during the evening.”

Doctors, nurses plead for supplies as countries work to slow spread of COVID-19

A Pause in Federal Executions, but Uncertainty About What’s Next